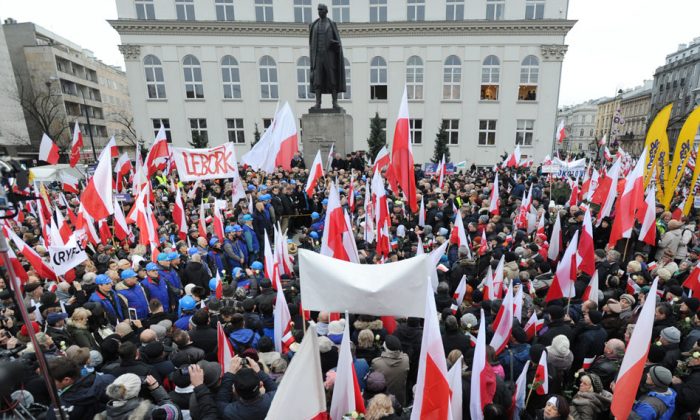 WARSAW, Poland—The right-wing and anti-migrant Law and Justice party has won a majority of seats in Poland’s parliament and can govern alone, the state election authority announced on Tuesday.

The party got 235 seats in the 460-seat lower house of Poland’s parliament and also won a majority in the Senate — the strongest position any single party has ever enjoyed in post-communist Poland to reshape the nation according to its visions.

For Law and Justice, which also has the backing of President Andrzej Duda, that means advocating a combination of Catholic conservative moral policies and planning more state intervention in the economy to help families and the poor. It also took a strong anti-migrant stand during the election campaign, criticizing the outgoing ruling party, Civic Platform, for agreeing to accept some 7,000 refugees as part of a European Union resettlement plan.

The party promises to reverse the outgoing government’s rise of the retirement age to 67 years, which was deeply unpopular. It has said it would reverse it to 60 years for women and 65 for men.

It has also vowed to put higher taxes on large corporations and banks while doing more to help smaller Polish businesses and families. For instance, it promised monthly family cash bonuses for children and wants free medications for people over 75.

Critics say its spending plans will harm the state finances, but Law and Justice says it will fund its social programs with more efficient tax collection and higher taxes on large supermarkets and banks, most of which are foreign-owned.

Duda had indicated he would proceed with convening the new parliament and designating the new prime minister as soon as the allocation of parliament seats is known.

Some party members say they want the new government to be in place by mid-November.

Law and Justice won 37.6 percent of the votes in Sunday’s voting. It also won 61 out of 100 seats in the Senate, which has the power to amend or reject legislation.