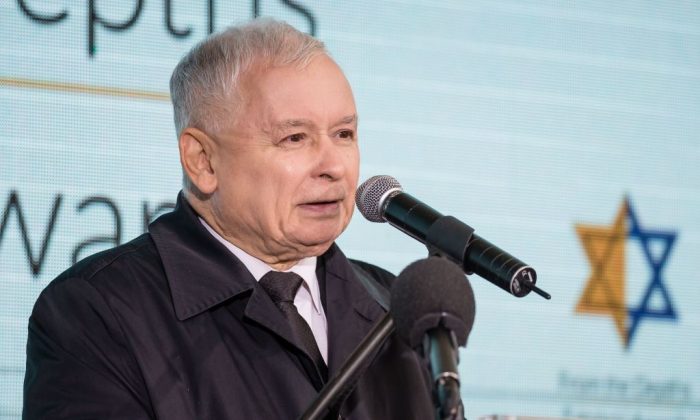 Jaroslaw Kaczynski, leader of the ruling party Law and Justice (PiS) speaks during the "From The Depths Zabinski Awards", honoring non-Jews who saved Jews during the Holocaust and WWII in Warsaw, Poland, on Sept. 18, 2017. (Wojtek Radwanski/AFP/Getty Images)
Russia-Ukraine War

The head of Poland’s ruling party has called for a peacekeeping mission to Ukraine that would have the capacity to defend itself and would operate under the auspices of NATO or a broader international alliance.

Jaroslaw Kaczynski, Poland’s deputy prime minister for security and the leader of the conservative ruling party, Law and Justice, called for the move on Tuesday during a visit to Kyiv.

“I think that we need a peacekeeping mission from NATO, or even possibly from a larger international structure, but a mission that will be able to defend itself and that will operate on Ukrainian territory, which will be in this country with the agreement of the president and the government of Ukraine and it will not be a defenceless mission,” Kaczynski said, according to a translation by AFP.

He added that the mission would work for peace and deliver humanitarian aid “but at the same time it will be protected by appropriate forces, armed forces.”

The delegation has since left and on Wednesday was safely out of Ukraine, according to Polish government spokesperson, Piotr Muller.

Speaking in Kyiv, Morawiecki once again called on the European Union to fast-track Ukraine’s admission into the bloc and pledged more military aid.

He shared a video of the deliberations in Kyiv in a Wednesday tweet, in which he called for Western Europe to “wake up” and back Ukraine more forcefully.

“The nation of Ukraine has reminded all of Europe what the fight for freedom looks like, what courage is, and what greatness is all about,” he said. “It’s high time for Old Europe, a sleepy and slothful Europe, to wake up and spring into action. For it to break through its wall of apathy and give Ukraine hope.”

In an earlier tweet, the Polish prime minister warned against Europe letting Ukraine fall under the Russian assault.

“Europe must understand that if it loses Ukraine it will never be the same again. It will no longer be Europe. Rather it will be a defeated, humiliated and pathetic version of its former self. I want a strong and resolute Europe,” he said.

While NATO-allied Western powers have provided military and economic aid to Ukraine amid the conflict, they’re reluctant to be seen as getting too deeply involved for fear of Russian retaliation. Repeated calls from Ukraine for a no-fly zone have been rebuffed on grounds of having the potential to trigger a NATO–Russia war, and talks about providing Kyiv with Polish fighter jets were similarly rejected as too escalatory.

Following the meeting with the European leaders in Kyiv, Zelensky expressed praise for their effort and once again highlighted his desire to join the EU.

“This is a very brave step. I’m sure that with these kinds of neighbors, we’ll be victorious. We have full confidence in them, they’re guarantors of our future as part of the European Union,” Zelensky said after the meeting, as cited by Polish news outlet Oko Press.

The meeting between the four leaders in the Ukrainian capital came nearly three weeks after Russian forces launched a multi-pronged invasion of Ukraine, which the U.N. estimates has driven over 3 million people from their homes.

Poland, which has taken in nearly 1.9 million refugees from Ukraine, has been a staunch ally to Kyiv amid the crisis.