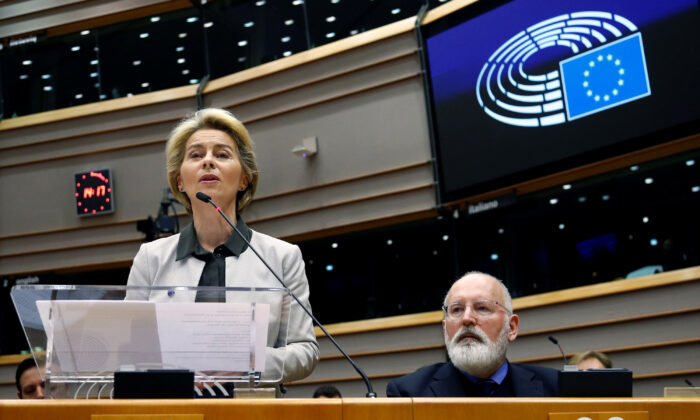 Fossil fuel-reliant Poland has won a reprieve from the European Union’s climate neutrality goals that are part of the bloc’s newly adopted Green Deal scheme that seeks to aggressively de-carbonize Member States’ economies.

Poland, which gets 80 percent of its power from coal, was the lone holdout following a marathon debate in Brussels that concluded early Friday with European Union member states agreeing to the goal of carbon neutrality by 2050.

“We have reached an agreement on climate change, it is very important, it was crucial, for Europe to show strong ambition,” EU Council President Charles Michel said.

Polish Prime Minister Mateusz Morawiecki told reporters in Brussels that Poland had secured an exemption allowing for a gradual transition to the EU’s climate objectives.

“The conclusions include an exception, so a rule or principle that must be taken into account in the forthcoming legislative process—and this has been set down in point three of the conclusions—that Poland will reach climate neutrality at its own pace,” Morawiecki said, according to the PAP Polish press agency.

Point three of the Dec. 12 meeting final conclusions statement (pdf) states that the European Council “recognizes the need to put in place an enabling framework that benefits all Member States and encompasses adequate instruments, incentives, support and investments to ensure a cost-effective, just, as well as socially balanced and fair transition, taking into account different national circumstances in terms of starting points.”

Without naming Poland the Council said that “One Member State, at this stage, cannot commit to implement[ing] this objective as far as it is concerned, and the European Council will come back to this in June 2020.”

“We understand that there are countries which are in a completely different economic, technological and social condition but Poland could not be blamed for being in such a situation regarding its energy system,” Morawiecki said, PAP reports. He added that on the basis of the summit conclusions, Poland had secured a path to reforming its energy sector in a way that would be “safe and economically beneficial.”

Morawiecki, who called the negotiations difficult, added that Poland did not commit to any specific date for reaching climate neutrality.

Several eastern European countries wanted other guarantees before they signed off on the bloc’s zero net emissions objective.

“The Czech Republic also wants to reach carbon neutrality, but we won’t make it without nuclear,” Czech Prime Minister Andrej Babis said on Twitter. “The EU must recognize nuclear as an emission-free source [of energy]. On top of that, the costs of carbon neutrality will be astronomical.

The Czech Republic and Hungary agreed after assurances that nuclear energy could be included in the final mix.

“The European Council acknowledges the need to ensure energy security and to respect the right of the Member States to decide on their energy mix and to choose the most appropriate technologies,” the Council said. “Some Member States have indicated that they use nuclear energy as part of their national energy mix.”

European Union leaders will work towards the objective of convincing Poland to back a deal on climate neutrality by 2050 at a summit in June next year, the French presidency said.

President Emmanuel Macron’s office said that, despite Poland securing an exemption, the EU’s executive will nonetheless move ahead with Green Deal implementation.

“Without waiting, this agreement will allow the Commission to deploy its Green Deal in the coming weeks,” the Elysee said.

German Chancellor Angela Merkel told reporters that Poland’s exemption did not reflect a lack of cohesion in the bloc, but that it was a question of adopting a different timeline to reach common targets.

“There is no division of Europe into different parts, but there is a member state that still needs a bit more time,” she said, DW reports.

The EU Council President acknowledged that some member states would find the transition more challenging.

“We took this decision with respect for many concerns of different countries because we know that it’s important to take into consideration the different national circumstances and also different starting points,” he said, BBC reports.

‘The Start of a Journey’

The summit was the first since European Commission President Ursula von der Leyen unveiled her European Green Deal, which she officially launched on Wednesday, calling the series of radical policy shifts “Europe’s man on the moon moment.”

“Today is the start of a journey,” von der Leyen said at the European Commission before pitching her flagship policy to the European Parliament. “The European Green Deal is very ambitious, but it will also be very careful in assessing the impact and every single step we are taking.”

Von der Leyen said in remarks at a European Parliament Plenary Session in July in Strasbourg that “bold steps together” were needed to realize ambitious climate goals, adding that “our current goal of reducing our emissions by 40 percent by 2030 is not enough.”

“I want Europe to become the first climate-neutral continent in the world by 2050,” she said, in reference to the “climate-neutral” agenda put forward in the 2015 Paris Agreement at the United Nations Framework Convention on Climate Change (UNFCCC) political conference.

Her two-step approach involves not just adopting ambitious climate-neutral aims for the EU, but convincing other advanced economies to adopt similarly bold goals.

“The EU will lead international negotiations to increase the level of ambition of other major economies by 2021,” she said.

The deal includes an expanded EU emissions-trading system and a tax to curb the risk of “carbon leakage.”

“If this risk materializes, there will be no reduction in global emissions, and this will frustrate the efforts of the EU and its industries to meet the global climate objectives of the Paris Agreement,” the roadmap states.

One major component of the plan is a so-called “Just Transition Fund,” a mechanism of at least 35 billion euros that would support the “regions most exposed” to the “decarbonization challenge.”

The new European Commission head has also called for turning the European Investment Bank (EIB) into “Europe’s climate bank” that would allocate half its total financing to U.N.-led climate actions by 2025.

In a policy plan, Von der Leyen has also proposed a “Sustainable Europe Investment Plan” that would fund parts of her Green Deal—which she called “Europe’s hallmark”—with one trillion euros over the next ten years.

The European Green Deal appears conceived in the same spirit as the expensive and expansive Green New Deal (GND) proposed by Democrats. Both schemes are concepts for a radically new clean energy economy based on yet-to-be tested engines of economic growth.

The GND resolution calls for “a new national, social, industrial, and economic mobilization on a scale not seen since World War II and the New Deal.”

Seeking to spurn carbon dioxide-producing fossil fuels while spurring carbon-free sources of energy, the GND charts a set of goals and guiding principles for candidates to flesh out specific policy proposals.

Most of the Democratic 2020 contenders have expressed support for the GND, including the entire leaderboard.

Critics of the GND, including Trump and the Republicans, denounce the scheme as costly, radical, and socialist.

“This is a nonsensical plan that basically gives away trillions of dollars,” said Daniel Turner, Founder and Executive Director of Power the Future, in a conversation with The Epoch Times.

“Bernie wants to do this to the tune of $16 trillion dollars,” Turner said, referring to a version of the GND proposed by Sen. Bernie Sanders. “This is totally devoid of math, it’s devoid of physics, it’s devoid of economics.”

“When he says we are going to be carbon-free by 2030, we’re going to produce all of our electricity and all of our transportation without fossil fuels. That’s just a myth,” Turner said. “That’s just not physically, technologically possible to do right now.”

Turner argues that a top-down state-driven push to reject fossil fuels and adopt green energy would cause massive job losses and spikes in prices of food and electricity, hitting America’s poorest the hardest. Besides, Turner adds, a GND-inspired transition is only possible under circumstances of greater government control and reduced civil liberties.

“The Green New Deal is not about the environment and it’s not about climate change.” Turner argues. “It’s a socialist manifesto. This is a way to restructure America.”

Saikat Chakrabarti, former chief of staff to Rep. Alexandria Ocasio-Cortez and author of the GND, acknowledged the plan’s economically transformative scope. “The interesting thing about the Green New Deal is it wasn’t originally a climate thing at all,” Chakrabarti said during a meeting with Washington governor Jay Inslee in July. “We really think of it as a how-do-you-change-the-entire-economy thing.”

Commenting on the economic aspects of Europe’s Green Deal, Executive Vice-President of the European Commission Frans Timmermans said, “The European Green Deal is an opportunity to improve the health and well-being of our people by transforming our economic model.”

“We all have an important part to play and every industry and country will be part of this transformation. Moreover, our responsibility is to make sure that this transition is a just transition, and that nobody is left behind as we deliver the European Green Deal,” Timmermans said.

“The European Green Deal is our new growth strategy,” Von der Leyen said. “It shows how to transform our way of living and working.”