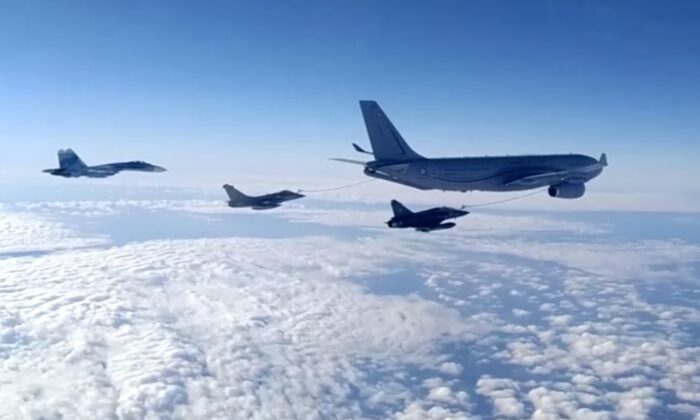 Poland Will Not Send Its Fighter Jets to Ukraine Amid Russia Conflict: Official

Poland’s military has not and won’t send its fighter jets to Ukraine to support the country’s military against Russia, said a deputy foreign minister.

Marcin Przydacz, the deputy minister, told Radio Zet that “we will not open our airports and Polish planes will not fight over Ukraine … Polish planes will not fight over Ukraine.” Another government spokesman, Piotr Mueller, said that the move to provide planes was still being discussed within NATO, but added that “at this stage it doesn’t look like such a decision will be made,” according to a translation of his statement, reported by Polish media.

On Sunday, U.S. Secretary of State Antony Blinken said that Poland, a member of NATO, has been given the “green light” to send fighter planes to Ukrainian forces.

Since the conflict started on Feb. 24, Ukrainian President Volodymyr Zelensky and his government have repeatedly asked the United States and NATO to send weapons, including fighter planes to defend the country’s airspace against Russia.

“We are working with our American, especially, friends and allies, on the steady supply of all the ammunition and anti-air, anti-tank, and planes to be able to effectively defend our country,” Ukraine’s Ambassador to the United States, Oksana Markarova, said on Sunday.

But over the weekend, Russia’s Defense Ministry issued a warning to other countries about sending fighter planes.

“The use of the airfield networks of these countries to base Ukrainian military aircraft and their subsequent use against the Russian armed forces may be regarded as the involvement of these states in an armed conflict,” Russian Defense Ministry spokesman Igor Konashenkov told the Interfax news agency on Sunday.

Konashenkov said Russia’s Defense Ministry is aware of “Ukrainian combat planes which earlier flew to Romania and other neighboring countries,” without elaborating.

Meanwhile, there have been calls by Zelensky’s government to enforce a no-fly zone over Ukraine, which NATO and the White House said would escalate the conflict.

While saying a no-fly zone is not being considered, NATO Secretary-General Jens Stoltenberg told reporters late last week that the move would lead to NATO and U.S. military planes attacking Russian assets in order to enforce such a policy.

On Sunday morning, Sen. Marco Rubio (R-Fla.) told ABC News that a no-fly zone over Ukraine could lead to a third world war or possibly a nuclear conflict.

“A no-fly zone has become a catchphrase. I’m not sure a lot of people fully understand what that means,” Rubio told ABC News. “That means flying AWACS 24 hours a day, that means the willingness to shoot down and engage Russian airplanes in the sky. That means, frankly, you can’t put those planes up there unless they’re willing to knock out the anti-aircraft systems that the Russians have deployed in, and not just in Ukraine, but Russia and also in Belarus,” Rubio said.