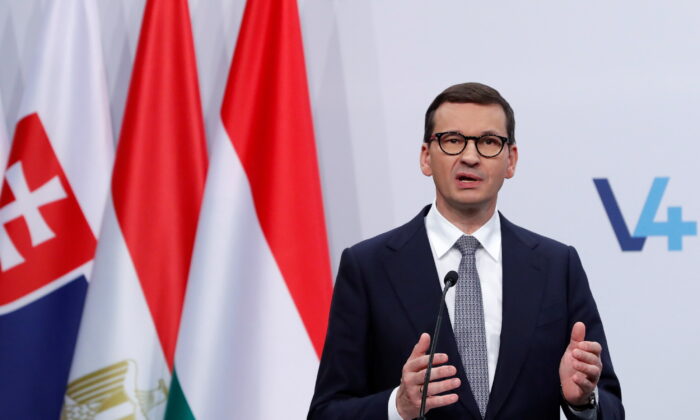 Poland Will Not Be ‘Blackmailed’ Into Accepting European Union Laws, PM Morawiecki Says

Polish Prime Minister Mateusz Morawiecki said on Thursday that his country will not bow to the European Union’s “blackmail” on deciding legal frameworks of member states, but is open to constructive dialogue.

Arriving at a summit of the 27-member bloc, Morawiecki said that Poland “was as faithful to the rule of law as others and as the EU institutions are.” He added, “Some EU institutions assume the right to decide on issues to which they have not been entitled to decide. They assume competencies which have not been handed over to them in the treaties.”

Morawiecki said that EU laws maintain supremacy over national laws on matters transferred to the EU. “We don’t agree to the constantly broadening range of competencies but we will, of course, talk about it.”

On Oct. 7, Poland’s Constitutional Tribunal ruled that some elements of EU law were incompatible with the country’s constitution. This ruling, criticized by Brussels, essentially gave national law primacy over that of the EU.

“It has to clear: You are a member of a club, you have to abide by the rules of the club. And the most important rule of the club is that the European law is over national law,” the EU’s top diplomat, Josep Borrell, told Reuters.

Since the nationalist Law and Justice (PiS) party took over power in 2015, the ideological conflicts have incrementally increased.

European Parliament President David Sassoli said the Polish tribunal’s ruling challenged “the legal bedrock of our Union,” and that, “never before has the Union been called into question so radically.”

European Commission President Ursula von der Leyen laid out three options as a response. The first option, “infringement,” is where the commission legally challenges the verdict of the Polish court.

The second option, which is active currently, involves the withholding of funds. Warsaw will not be able to access the 36 billion euros ($42 billion) of COVID-19 pandemic recovery grants. This could lead to a further blockage of around 70 billion euros ($81 billion) set aside for development projects in the 2021-2027 budget.

The third option would be the implementation of Article 7 of the EU treaty which suspends member states of certain rights, including the right to vote on EU decisions.

Morawiecki, however, maintained his country’s stance under repeated criticism in the tense debate on Tuesday. This led to the idea of Poland exiting the bloc which the prime minister dismissed. He said that there were no plans for a “Polexit” as there is considerable support among the Polish for remaining within the EU.

A majority of European countries, including Ireland, France, Sweden, Finland, Luxembourg, and the Netherlands were critical of Poland, barring staunch ally Hungary. Hungarian Prime Minister Viktor Orban has not been a supporter of excessive European Union interference in the laws and decisions of member states.

“Poland is one of the best European countries. There is no need for any sanctions, it’s ridiculous,” Orban said.

“The time for talking is never over, but it doesn’t mean that you cannot take action in the meantime,”  Knapen said. “It’s going to come soon.”

Outgoing German Chancellor Angela Merkel called for finding “ways of coming back together,” and warned against isolating Poland, the largest ex-communist EU country of 38 million people.