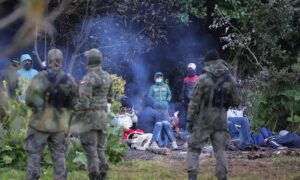 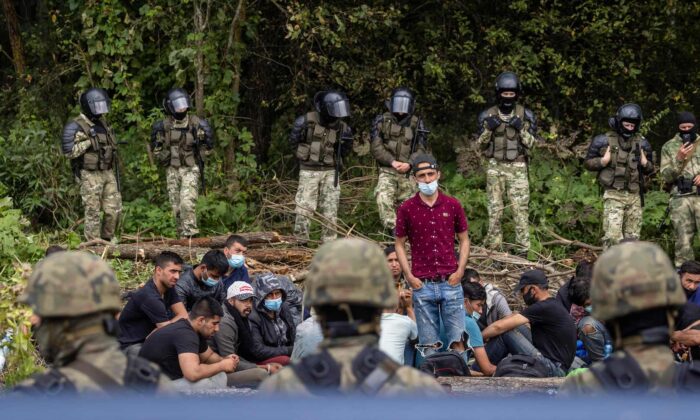 A member of a group of migrants believed to be from Afghanistan stands as he tries to confirm their will to apply for international protection in Poland to Polish volunteer lawyers, in the presence of press members and Polish Parliament deputies, in the small village of Usnarz Gorny near Bialystok, northeastern Poland, located close to the border with Belarus, on Aug. 20, 2021. (Wojtek Radwanski/AFP via Getty Images)
Europe

Poland’s government is set to declare a state of emergency on Tuesday in several areas along the countries’ border with Belarus as immigration levels have recently surged.

The legislation, believed to be signed by Polish President Andrzej Duda on Aug. 31, comes as thousands of illegal immigrants, mostly from Iraq and Afghanistan, have tried to unlawfully enter the country from neighboring Belarus.

“Please expect Poland’s security to be strengthened in the nearest time through acts of law, and also through subsequent actions on Poland’s border,” Duda said.

Prime Minister Mateusz Morawiecki said on Tuesday the situation along the border is “in crisis” and blamed authoritarian Belarusian leader Alexander Lukashenko for sending the immigrants into Polish territory as a way to create instability in Europe.

“The situation on the border with Belarus is still a crisis, it is still tense because the Lukashenko regime decided to transport people mainly from Iraq to Belarus—to push these people to the territory of Poland, Lithuania, and Latvia in order to introduce an element destabilizing the territory of our countries,” Morawiecki said.

Parliament still needs to approve the move for the declaration to take effect, though the president said he believed lawmakers would support his decision.

Morawiecki said the measure will be active for a 30-day period in parts of Podlaskie and Lubelskie province. It will provide officials with the authority to monitor and control people’s movements in the two regions.

The Polish Border Guard said in a statement earlier this month illegal border crossings have reached record heights and 349 immigrants attempting to cross the Belarus border were arrested between Aug. 6 and Aug. 9, a record number.

In August alone, more than 3,200 people tried to cross illegally into Poland from Belarus, border officials said, Euro News reported. In the whole of 2020, only 122 people crossed the Belarus border into Poland illegally and were detained.

Poland also started the construction of an 8.2-foot (2.5-meter) high fence along its 260-mile (418-kilometer) border last week to halt the flow of illegal immigrants.

“A new 2.5-meter-[8.2-foot]-high solid fence will be built on the border with Belarus,” Polish Defense Minister Mariusz Blaszczak wrote on Twitter. “More soldiers will [also] be involved in helping the Border Guard.”