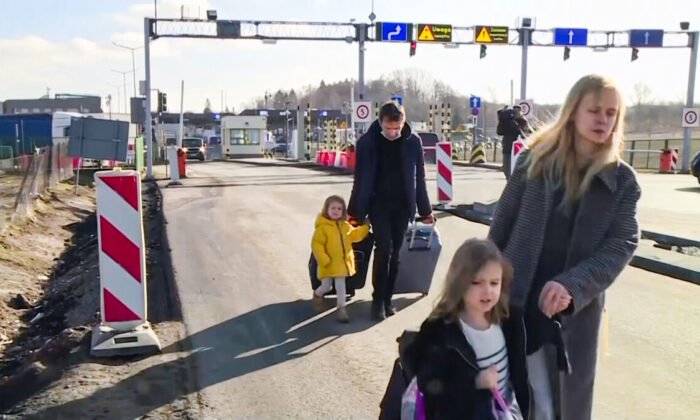 Ukrainian family walking along the road after crossing the border in Medyka, Poland, on Feb. 24, 2022, in a still from a video. (TVN via AP/Screenshot via The Epoch Times)
Europe

Poland’s military increased its readiness level, and Lithuania and Moldova moved toward doing the same after Russia launched a wide-ranging attack on Ukraine on Thursday, hitting cities and bases with airstrikes or shelling.

The parliament in Poland, a nation on NATO’s eastern flank which borders Ukraine and Belarus, strongly denounced Russia’s attack on Ukraine and vowed its support to Ukraine.

Civilians piled into trains and cars to flee and border crossings increased from Ukraine to Poland, which has prepared centers for refugees.

One unnamed couple with a child were crossing over to Poland and traveling to Cyprus after that.

“My husband told me that I am panicking and it won’t happen and now it’s true and this is absolutely incredible,” said the wife as the couple crossed the border.

General Tomasz Praga, the Border Guard Commander in Chief, said the situation at the Polish border with Ukraine remained stable despite an increase in crossings and said Border Guards were prepared for a surge in traffic.

There are now 10,000 U.S. soldiers in Poland, more than half of which deployed in recent weeks amid the Russian threats.