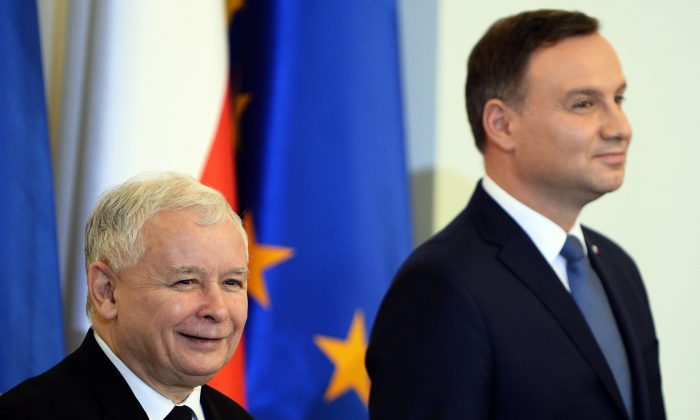 Poland is planning to construct a new canal so that its ships no longer have to pass through Russian waters to get to the Baltic Sea.

The president of Poland’s governing party says the country is pressing ahead with the plans in order to cut Russia’s influence. “It is important for Poland’s status,” Jaroslaw Kaczynski, head of the Law and Justice party, said in a radio interview, according to the Daily Telegraph.

“In the end, Poland needs to shed the last traces of being a dependent state. We need to show that the times Russia dictated what we could or could not do on our territory are over,” Kaczynski said.

The canal is intended to be dug through a thin strip of land between the Vistula Lagoon and the Baltic Sea, on Poland’s northeast coast.  The canal will be 1,100 yards long and 16 feet deep, and is expected to be completed by 2022.

Currently, Polish ships exiting the lagoon from the port of Elblag must sail through Russian waters.

Russia has complained to the European Commission that it hasn’t been consulted about the canal and that construction could damage the ecosystem in the lagoon. However, Kaczynski said that Russia has “always been opposed” to the canal and the complaints are an “attempt to block this strategic investment for Poland.”

The day before Kaczynski’s remarks, U.S. President Donald Trump praised Poland for its efforts to decrease its reliance on Russia, particularly with regard to energy.

Russia’s Gazprom and its European partners are developing the Nord Stream 2 pipeline, designed to double natural gas volumes pumped to Germany from Russia via the Baltic Sea, avoiding the traditional transit route through Ukraine.

“Reliance on a single foreign supplier can leave nations vulnerable to extortion and intimidation and that is why we congratulate European states such as Poland for leading construction of a Baltic pipeline, so that nations are not dependent on Russia to meet their energy needs,” Trump said in a speech at the U.N. General Assembly.

Most eastern European states and the United States argue that the proposed Russian pipeline could ultimately limit supply routes and the energy security of the European Union, as well as hurting Ukraine’s efforts to reform its economy as bypassing the country would deprive it of billions of dollars in gas transit fees.

The Baltic pipeline is planned to provide Denmark and Poland with direct access to Norway’s gas fields, expanding Europe’s gas transmission capacity by up to 10 billion cubic meters per year. It would be completed by the end of 2022; a final decision on investment is expected at the end of this year.

Poland has also called on the United States to help counter Russian aggression by building a permanent military base in Poland. President Andrzej Duda even suggested such a base could be called “Fort Trump.”

“We will enhance cooperation in military relations and intelligence, missile defense, technology, and training,” Trump said.

The proposal from the Polish defense department was first uncovered in late May and asserts that Poland is willing to contribute as much as $2 billion to pay for the new base. The plan would see 15,000 U.S. troops and 250 armored vehicles deployed in Poland, a move that could provoke ire from Russia.

The proposal stated, “Establishing such a force is necessary to present an unequivocal challenge and deterrence to Russia’s increasingly emboldened and dangerous posture that threatens Europe.”

However, a Russian spokesman told Tass news agency that “these expansionist steps, certainly, result in counteractions of the Russian side to balance the parity, which is violated every time this way.”