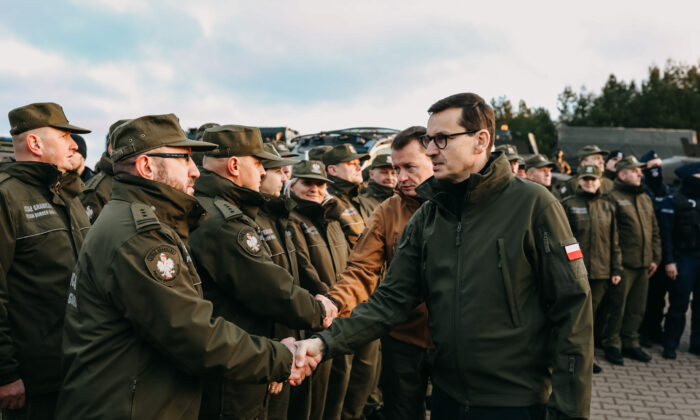 Poland, Lithuania, and Latvia are considering asking NATO to hold emergency talks as they struggle to manage a tense migration standoff on their borders with Belarus, the Polish prime minister said on Sunday.

Poland is in discussions with Lithuania and Latvia on whether to trigger Article 4 of the NATO treaty, Mateusz Morawiecki, the Polish prime minister, told Polish state-run news agency PAP.

Under Article 4 of NATO’s founding treaty, if a member country believes that its territorial integrity, political independence, or security is threatened it can bring the issue to the attention of NATO’s political decision-making body and discuss it with Allies.

“It is not enough to publicly express our concern. Now concrete steps and the commitment of the whole alliance are needed,” Morawiecki said according to PAP.

“There is no doubt that the matter has gone too far,” Morawiecki told PAP. “We already know that in order to stop the Belarusian regime, words alone are insufficient. We are aware that stronger sanctions will be necessary.”

Morawiecki said that he had been in daily contact with the European leaders and worked very closely with the prime ministers of Lithuania and Latvia.

The Prime Minister also ensured that his country is ready to provide humanitarian assistance to illegal immigrants such as food, medical equipment, clothing, sleeping bags as long as it is not blocked by the Belarusian authorities, according to PAP.

He also stated that the whole European Union should contribute to protecting its eastern border.

The Council of the European Union amended on Monday the criteria for imposing sanctions, according to a statement from the European Council.

“The EU will now be able to target individuals and entities organizing or contributing to activities by the Lukashenko regime that facilitate illegal crossing of the EU’s external borders,” the statement said.

So far, a total of 166 individuals and 15 entities are designated under the sanctions regime on Belarus which include travel bans and freezing of assets, the statement read. Among the sanctioned individuals, the statement lists Belarusian President Alyaksandr Lukashenka, his son, and a national security adviser, Viktar Lukashenka, as well as “other key figures in the political leadership and the government, high-level members of the judicial system and several prominent economic actors.”

The European Council is a collegiate body of the European Union whose role is to define the overall political directions and priorities. The council consists of the heads of EU member states, its president, and the head of the European Commission.

Latvia, a member of the EU and NATO, has deployed 3,000 troops for a previously unannounced military exercise near its border with Belarus this weekend amid an escalating illegal immigration crisis along the Belarusian-Polish border.

“We cannot exclude that part of these (migrant) groups will move further north and can reach the Latvian border. We’re ready for it,” Latvian Defense Minister Artis Pabriks told the national broadcaster.

The military drill began on Saturday and is scheduled to last until Dec. 12, army spokeswoman Sandra Brale told the BNS news wire.

Polish border guards have reported 5,100 attempted irregular crossings from Belarus so far in November, compared to 120 in all of 2020. Comparative numbers also spiked in Latvia and Lithuania, the two Baltic states that border on Belarus.

U.S. Secretary of State Antony Blinken on Saturday condemned, in a conversation with Polish Foreign Minister Zbigniew Rau, the exploitation of vulnerable immigrants by the Lukashenka regime, according to a statement by a U.S. State Department’s spokesperson.

Blinken reaffirmed U.S. support for Poland, the statement said. “The actions by the Lukashenka regime threaten security, sow division, and aim to distract from Russia’s activities on the border.”

Blinken and Rau “called on Lukashenka to address the root causes of sanctions imposed by the West—the denial of human rights and fundamental freedoms for the Belarusian people,” the statement said.

Thousands of illegal immigrants have traveled to Belarus in the hope of crossing into the European Union (EU), only to find themselves trapped on the border in freezing conditions.

European leaders accuse Belarus of mounting “a hybrid attack” by flying in migrants from countries like Syria and Afghanistan and pushing them to cross illegally into EU member Poland. Minsk has repeatedly denied the accusation.