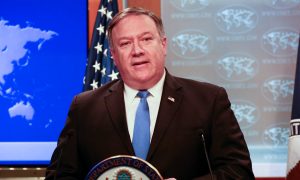 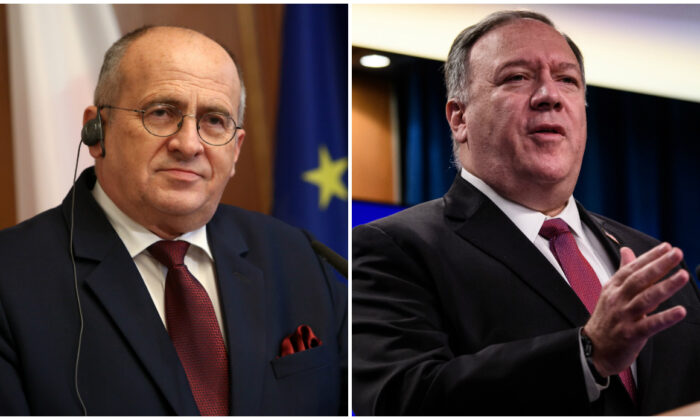 Ministers of foreign affairs from various countries convened on Monday for a virtual conference hosted by Poland to discuss challenges to religious freedom and share ideas to conquer them.

Organized in cooperation with the United States, Poland’s foreign minister Prof. Zbigniew Rau hosted the foreign ministers as well as other high-level representatives from numerous states for the third annual Ministerial to Advance Religious Freedom or Belief.

Assaults on religious freedom or belief occur all across the world, Pompeo said. He singled out China’s ruling Chinese Communist Party (CCP) to emphasize its dehumanizing war on faith, through which it targets “Christians, Muslims, Buddhists, and Falun Gong devotees alike.”

Pompeo also highlighted the intolerance of Iran’s Khomeinist regime, which persecutes religious minorities and enforces blasphemy laws that “have held the Iranian people hostage for now 41 years,” and the socialist state of North Korea, where religious believers are executed, tortured, and imprisoned for “simple acts of devotion like having a Bible.”

“Let’s keep up our work to secure freedoms in our home countries, and to speak up on behalf of victims of religious persecution all around the world. Let’s proceed with the understanding that faith is eternal, and tyranny must be overcome,” Pompeo also said.

Australia also participated in the meeting. Their foreign minister Marise Payne expressed Australia’s concerns about the measures the CCP is taking to curb the CCP virus pandemic in China that restrict religious rights.

“Unfortunately in 2020, we continue to witness religious intolerance and abuse of religious freedoms, such as the persecution of religious minorities around the world, terrorist attacks, and other violence against religious groups, and COVID-19 measures that disproportionately restrict individual rights, including the right to manifest religion or belief. Australia is committed to promoting and protecting the right to freedom of religion or belief for all in the context of our broader work to champion universal human rights and freedoms,” Payne said.

Bahrain’s Minister of Foreign Affairs, Dr. Abdullatif bin Rashid Al Zayani, said the principles that “promote and protect freedom of religion and belief” have been “at the core of the Kingdom of Bahrain’s values for many centuries, with the freedom of religion “explicitly guaranteed by the Constitution.”

Bahrain was proud to sign the Abraham accord with Israel in September, and subsequently, a memorandum of understanding with the United States “to combat anti-Semitism and hatred, promote mutual respect, and develop programs to enhance peaceful coexistence in the Middle East,” bin Rashid Al Zayani said.

Polish secretary of state for legal and treaty affairs Piotr Wawrzyk said in closing remarks that the international community can take a number of concrete actions, such as inter-religious dialogue and the proper use of modern technologies, to ensure freedom of religion, according to a statement.

On Nov. 17–the second day of the two-day conference–representatives from civil society and non-governmental organizations are scheduled to discuss various issues related to religious freedom, including advancing freedom of religion and belief during the time of the CCP virus pandemic.

The Trump administration has made “religious freedom a top priority in the United States foreign policy for the first time in America’s history,” Pompeo said at a press conference on Nov. 10.

The first-ever ministerial to advance religious freedom around the world was held in 2018 by Secretary Pompeo in Washington.

Building on the successes of the 2018 and 2019 ministerials, the Trump administration in February launched an International Religious Freedom or Belief Alliance. It was initially joined by 26  countries, which has since grown to 31 members states.

The mission of the alliance is to do more in order to “protect members of religious minority groups and combat discrimination and persecution based on religion or belief,” and “to promote respect for freedom of religion,” according to the State Department.