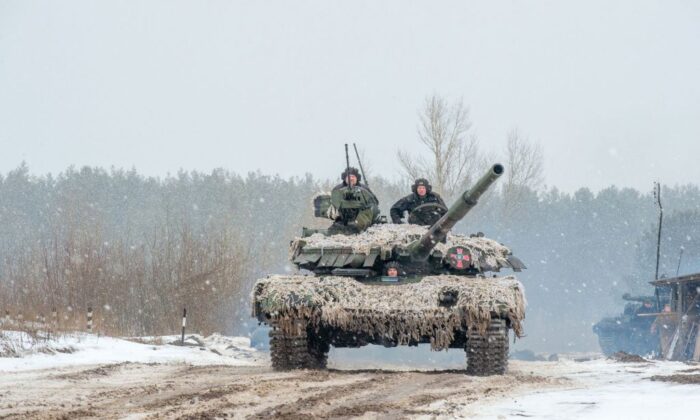 Ukrainian Military Forces servicemen use tanks, self-propelled guns and other armored vehicles to conduct live-fire exercises near the town of Chuguev, in Kharkiv region, on Feb. 10, 2022. (Sergey Bobok/AFP via Getty Images)
Viewpoints

Can Avoiding War Come at Too High a Price?

“Fellow Australians, it is my melancholy duty to inform you officially that in consequence of a persistence by Germany in her invasion of Poland, Great Britain has declared war upon her and that, as a result, Australia is also at war.”

Most readers today were born long after these words were spoken, but it takes little imagination to share in our minds something of the dread they conveyed to a people who still vividly remembered the awful losses of World War I that had ended only 20 years before.

“It’s all happening again,” they thought as they prepared their minds for the deprivations and the deaths that they knew in their hearts were bound to follow.

Humans always hope, of course, but the prospect of peace by Christmas was a forlorn one. The troops who embarked for Asia and the Middle East the following year could not have foreseen an early end and a homecoming, nor even predicted their prospects of surviving at all.

Of course, many didn’t; they left their homeland and their loved ones never to return.

Today, we cannot fail to be moved as we remember these events of more than 80 years ago—and to be struck by their strangeness.

Why would Britain go to war again? Why would Australia necessarily follow?

Revisionist historians (by revisionist I mean ignorant or fantasist) would tell you that Britain was a warlike and ruthless nation and that Australia did its bidding as a servile colonial state.

Those who actually lived at the time knew that Britain declared war because Hitler’s Germany invaded Poland, with which Britain had an alliance, and that Australia’s response, far from servile, was prompted by a certain gung-ho affection and loyalty. It was unthinkable, in those days, that we could act otherwise.

But the main point was that honour and trust were at stake. We could no longer tolerate Nazi aggression. We had commitments to meet, regardless of the price that had to be paid. Talking and threatening hadn’t worked.

No reader (and certainly not this writer) wants to see events like these happen again. Our lives have been lived with wars and rumours of wars and we yearn for peace.

But the contrast between the brave actions of nearly a century ago and the craven prevarication of modern western leaders in their response to Russia’s aggression against Ukraine couldn’t be greater.

So much talk, so little action. President Joe Biden’s promise of serious economic reprisals sounds good on first hearing, but in practice, he’s sending a message that in fact, we won’t go to war for the Ukrainian people.

We might block bank accounts or cancel visas, we might withdraw diplomats and boycott events, but we won’t risk our own necks.

To be honest, I’m relieved, as I think most of us are. I’m too old to be sent to fight, but I dread the thought of young people being sent to serve and even bleed on my behalf. Not only does the loss of lives appal me, but the waste of resources and the extinction of dreams and ambitions.

For most of us in developed countries, life is very attractive, not always perfect all the time, but full of promise.

So many people have told us, so often and for so long, that war is never a solution to any problem. I suppose I agree with them.

Can avoiding war come at too high a price? We failed to act when China took Tibet; now it’s absurdly too late even to think about it. We finally acted in Vietnam but came out bloodied and bowed. The nuclear spectre has haunted us for three-quarters of a century.

We wax hot and cold on every international issue, sending in troops if the cost is not too great, berating offenders with virtually empty words and gestures otherwise.

I don’t blame our politicians: we’re all in this together, a very frightened world that has accommodated itself to the safe notion that while words might not always mean a lot, they’re always cheaper than deeds.

It is difficult to take pride in our Western governments as they posture over Russian aggression, and in a not dissimilar way, boycott the Winter Olympics, yet allowing athletes to participate and business to go on pretty much as usual.

Menzies concluded his message with these words: “May God in his mercy and compassion grant that the world may soon be delivered from this agony.”

To most of us today—streetwise, sophisticated, cynical, toughened by several decades of default-position atheism—that sounds like mere empty verbiage. But Menzies meant it, and most of those who heard him then would have known it was a prayer, not a platitude.

This has been a reflection of a question to which I have no answer. Should we act bravely—and violently—as our fathers did, drawing lines in the sand and savaging any enemy that crossed them? Or can we in good conscience say that our avoidance of naked conflict, our extreme reluctance to commit to seriously tough measures against an aggressor, is really wisdom learned?