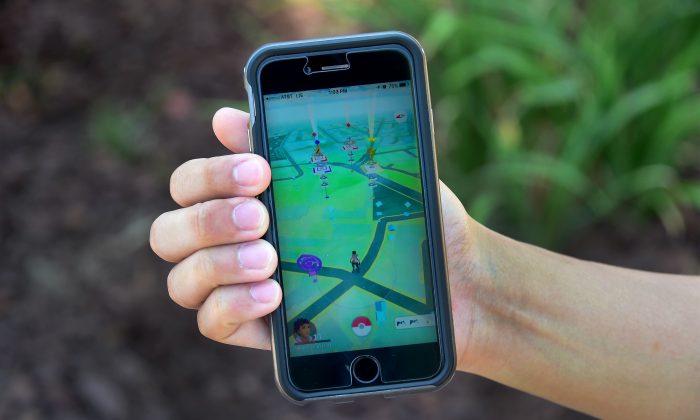 Eric Lee displays the game Pokemon Go on his cellphone on July 13, 2016 in San Gabriel, California where he and friends were playing at the San Gabriel Mission, one of a number of landmarks across communities in southern California which can serve as gathering point for people playing the game. (Frederic J. Brown/AFP/Getty Images)
Gaming

The booming success of Pokemon GO might be a relief to parents who want their kids to get outdoors more. But the mobile video game might not be the safest pastime.

Police departments from Australia to Virginia are warning players to pay attention and refrain from breaking the law. The game itself contains a warning against risky behavior.

The problem is, playing a video game can be hard to reconcile with functioning in the real world.

Pokemon GO was developed by Niantic and released on July 6 by The Pokémon Company. The game scatters virtual pocket monsters—Pokemon—at map locations in the real world. Much like geo-caching, players have to physically reach the location, as confirmed by their phone’s GPS, to collect the critters in the game. Moreover, Pokemon only pop up on the game’s map when the player gets close to them, making the players walk around and explore the area to find them.

Local landmarks, like libraries, parks, fountains, and police stations can be marked as Pokestops and Gyms—where players can collect in-game perks or use their Pokemon to fight other Pokemon.

From anecdotal online reports, the game does make people travel for their Pokemon—which brings exercise, makes players visit local landmarks, and can even encourage them to socialize more thanks to meeting other Pokemon hunters.

Also, it’s massively popular. The game, both for Android and iOS, has been downloaded over 15 million times, USA Today reported, citing estimates of SensorTower research firm on Wednesday.

At one point, some 21 million people were playing the game simultaneously, making it the biggest mobile video game in U.S. history, according to SurveyMonkey.

Stock for Nintendo, the co-owner of the Pokemon franchise, has soared nearly 60 percent since the game’s release, adding close to $10 billion to the company’s value, according to CNN Money.

But, the game is a significant distraction and perhaps more dangerous than any other.

While mobile games can be dangerously absorbing to begin with, playing them while walking down the street is difficult, as the real world keeps distracting the player.

Pokemon GO, on the other hand, forces the players to play while walking down the street, while distracting them.

Reports have been coming from all over the country of people getting injured while playing.

Mike Schultz, 21, a communications graduate on Long Island, New York, took a spill on his skateboard as he stared at his phone while cruising for Pokemon critters last week. He cut his hand on the sidewalk after hitting a big crack, and blames himself for going too slowly.

“I just wanted to be able to stop quickly if there were any Pokemons nearby to catch,” he said.

Kyrie Tompkins, 22, a freelance web designer, fell on the sidewalk and twisted her ankle while wandering in downtown Waterville, Maine.

“It vibrated to let me know there was something nearby and I looked up and just fell in a hole,” she said. Her parents had to drive her and her fiancé home.

Similar stories have appeared on Twitter—one player tripped over a cinder block, another fell into a creek, and some others got sunburned chasing the monsters.

Spent so long playing #pokemongo this weekend my skin is blistered due to sunburn … Oops ! Don’t forget your SUNCREAM

Less than one day of having #PokemonGo and I already injured myself by tripping over a cinder block.

There are more serious consequences too.

After climbing over a fence to catch a Pokemon, two men fell dozens of feet off a cliff in San Diego and were taken to a hospital, NBC San Diego reported.

A man in New York got distracted by the game, drove off a road into a tree, and totaled his car, FOX 5 reported. He was not seriously hurt.

To be sure, similar incidents have happened with people texting or calling while walking and driving. But there’s a difference—video games are specifically designed to be absorbing.

Video games can have a high “cognitive load,” according to Dr. Chris Ferguson, psychology professor at Stetson University in Florida and an expert on the psychological effects of video games.

People have a limited pool of attention and concentration, Ferguson explained. A task that requires a lot of brainpower and attention prevents one from focusing on anything else.

The secondary task, like walking or driving, can even be taken over by a part of our brain that controls automated tasks.

That works just fine “as long as nothing bad happens,” Ferguson said.

But “if there’s a situation that requires you to shift back into alertness and deliberate control of the task, then it can be hard, since that area of the brain is already busy playing Pokemon,” he said in a phone interview.

“[B]ecause the game essentially forces you to keep the app open and check it constantly, you are really not paying attention to where you are much of the time. Add in headphones, and the game can feel downright dangerous because of how much it engrosses you,” he wrote for Forbes.

Tassi spent a day playing the game and was almost hit by a bike twice and once by a car.

“I really do worry about kids playing this and not paying attention to where they are,” he wrote.

Meanwhile, criminals have already found a way to exploit the game.

The game allows players to purchase Pokecoins, about 100 for a dollar. Among other perks, one can buy a “Lure Module” for 100 coins—a feature that attracts Pokemon to a selected Pokestop for 30 minutes. The place will be highlighted on every player’ map, likely attracting nearby players to come and collect the extra critters.

The O’Fallon Police Department discovered a gang of four, at least one of them armed, that used the “Lure Module” function to lure players to a parking lot (and possibly other locations) to rob them.

“These suspects are suspected of multiple Armed Robberies both in St. Louis and St. Charles Counties,” the police wrote on its Facebook page. “If you use this app (or other similar type apps) or have children that do we ask you to please use caution when alerting strangers of your future location.”

There have been multiple reports of players going after Pokemon in places where they (the players) shouldn’t have been in the first place.

Police officers of Pflugerville, Texas, spotted a man playing the game in a section of a police parking lot where the public isn’t allowed. The player had to pass keep-out signs and go over a fence or under a gate to reach the area.

“I’m not sure how he got back there, but it was clear what he was doing,” said Assistant Police Chief Jim McLean. “He was playing a Pokemon game with his phone up in the air.”

In Utah, Ethan Goodwin, 17, of Tremonton, was slapped with a trespassing ticket that he worries could cost him up to $200 after he and a couple of friends went on an early morning Pokemon chase at an abandoned grain silo. He managed to catch three critters.

“I wouldn’t say it was worth it, but I would say I’m glad I have the Pokemon I have now,” he joked. He added: “It’s a dumb game, really, really stupid.”

An couple in Ohio were arrested Thursday after they jumped the fence of Toledo Zoo to hunt for Pokemon, NBC 4i reported.

Three people got locked in a cemetery in Dunmore, Pennsylvania, on Tuesday. They were looking for Pokemon and didn’t realize the cemetery closes at dusk. They had to be let out by the police, The Times-Tribune reported.

From players’ online comments, it seems not uncommon for people to venture out and hunt for Pokemon in the middle of the night. To catch some of the monsters, it may even be encouraged. Players have reported water Pokemon can be found around lakes, fire Pokemon around gas stations, and “ghost” Pokemon at night.

“The poor police here in Colorado, they stopped us last night to ask questions about the game, and remind us the park was closed. There were about 30 of us at midnight, running around a park. I felt like an idiot, because i know better,” user Trisha Abney commented on Facebook.

Some players have expressed worries on social media that the game could result in a fearful property owner pulling a gun. This scenario could fall into a legal gray area in the nearly two dozen states with “stand your ground” laws that allow people wide latitude to use deadly force when they believe they are in danger.

So far, there seems to be no reports of such an incident.

The game lists as Pokestops and Gyms places that hardly lend themselves to loitering.

The Darwin Police Station in Australia has been designated a Pokestop, prompting police to release a statement reminding users they don’t have to enter the station to collect the in-game reward and should look up from their phones when crossing a street.

Both the White House and Pentagon have been designated Gyms in the game, possibly putting players at odds with security.

“For safety’s sake, never play Pokemon GO when you’re on your bike, driving a car, riding a hoverboard, or anything else where you should be paying attention, and of course never wander away from your parents or your group to catch a Pokemon,” the website states.

Multiple police departments have also warned players to pay attention to their surrounding and not trespass while playing.

But a multitude of reports show many people disregard these warnings.

Part of the reason is that video games or other enjoyable activities can skew a person’s risk perception.

If someone playing the game sees a Pokemon behind a fence, the emotional buzz in catching it might outweigh their better judgement not to trespass.

He said some of the risks may reduce over time. For example, the cognitive load is especially high for new tasks, so once players get more used to it, they may be less distracted by the game.

But that only lessens, not solves, the issue.

Meanwhile, the game is about to debut in Asia, the birthplace of Pokemon. It’s possible we haven’t seen anything yet.