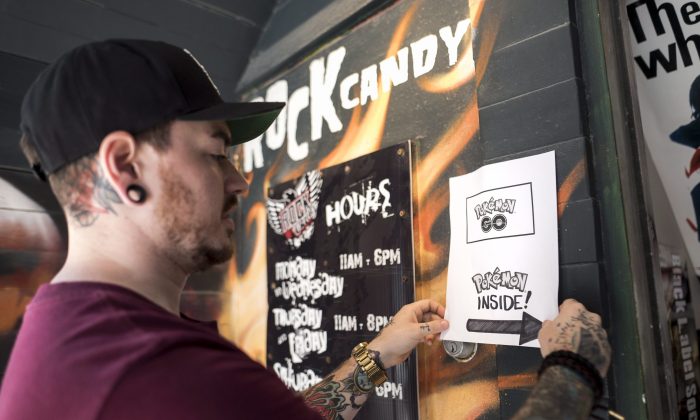 Jeff Powers, assistant manager at Rock Candy Boutique, puts up a sign encouraging Pokemon Go players to play inside the store in Halifax on July 19, 2016. (The Canadian Press/Darren Calabrese)
Canada

Pokemon Go: Canadian Businesses Try to Capitalize on the Craze

TORONTO—The Pokemon Go sign directing people to the front door of Rock Candy Boutique in Halifax has only been up for a week, but Jeff Powers says he is already seeing it pay off.

“Downtown is alive in a way that I haven’t seen in a long, long time,” said Powers, a manager at the store, which sells various rock music T-shirts, hoodies, hats, and other paraphernalia.

“There is just a flood from everybody, from young kids to older adults, and you can tell they’re playing this game.”

The wildly popular video game sends players into the real world to search for the mythical digital pocket monsters known as Pokemon, who appear onscreen when users hold up their smartphones in various locations at various times of the day. It is currently the most downloaded app in the Apple app store.

Powers said the sign has brought people into the store who wouldn’t normally shop there but hear it’s a good place to play the augmented reality video game.

“This has just blown up bigger than anybody has expected,” he said, adding that the various Pokemon merchandise the store carries have also been flying off the shelves.

This has just blown up bigger than anybody has expected.
— Jeff Powers, Rock Candy Boutique

“It leads people to travel down streets they normally wouldn’t. It’s bringing a lot of foot traffic down to the side streets and a lot of people are coming in and buying things because they were just in the area.”

Some Canadian businesses have been jumping on the craze by actively encouraging potential customers to use their shops as PokeStops or Pokemon gyms—locations at which to play the game.

But marketing professor Ken Wong cautioned that although it may seem like a no-brainer for businesses to capitalize on Pokemon Go’s popularity, it can also backfire.

“It’s a statement of what your brand is, who it stands for, and who it seeks to appeal to,” said Wong, who is with the Stephen J.R. Smith School of Business at Queen’s University.

“While it may generate traffic for you, whether or not that traffic generates profitability in the short, and more importantly, long term is a different story. If you’re in a business that needs a promotion to stay in business, you’re already on a slippery slope.”

Wong said the publicity stunt would mostly profit businesses that appeal to the biggest demographic of Pokemon Go players or have a link to the game, such as stores that sell cellphone accessories or comic books.

There may be a potential to grow business in the short term, but he doesn’t see that enduring.

“Eventually the novelty will wear off. There will always be diehards but it’s no different than the Trivial Pursuit craze,” he said.

“If you are the right kind of business, get in as soon as you can when the fad has the greatest duration of effect, because if you wait too long, the fad will be over.”

In Toronto, Peter Coulter set up a chalkboard sign Monday outside his optical store featuring a promotion offering passersby a free glasses cleaning if they can capture a Pokemon creature inside.

Although he says he hasn’t seen any direct sales from the sign, he stands behind it.

“It’s quite the phenomenon,” said the manager of Optical Thirty 8. “The sign was just something catchy to encourage people to come in and use their phones so we can show them some of our services and at the same time, maybe they’ll buy some new glasses.”