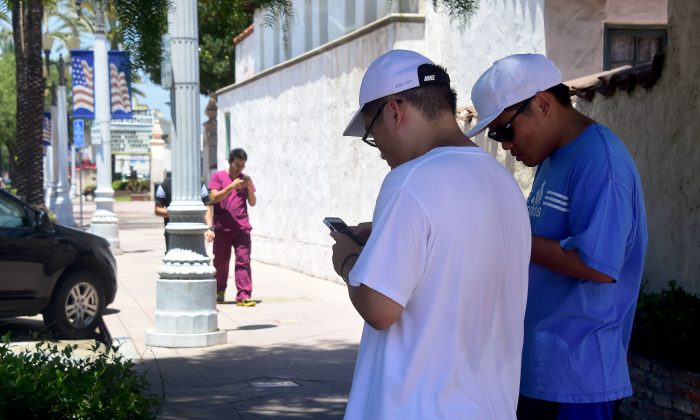 Pokemon GO Can Be a Dangerous Exercise for Distracted Players

The booming success of Pokemon GO might be a relief to parents who want their kids to get outdoors more. But it might not be the safest pastime, according to several recent incidents.

The mobile video game, released July 6 by Niantic and The Pokémon Company, scatters virtual pocket monsters—Pokemon—at map locations in the real world. Much like geo-caching, players have to physically reach the location, as confirmed by their phone’s GPS, to collect the critters in the game. Moreover, Pokemon only pop up on the game’s map when the player gets close to them, making the players walk around and explore the area to find them.

Local landmarks, like libraries, parks, fountains, and police stations can be marked as Pokestops and Gyms—where players can collect in-game perks or use their Pokemon to fight other Pokemon.

From anecdotal online reports, the game does make people travel for their points—which is beneficial in many ways.

And it seems to have caught on—it’s the top free app in the iTunes chart and already has more than a million installs on Google Play.

But, the game is a significant distraction and perhaps more dangerous than any other.

While mobile games can be dangerously absorbing to begin with, playing them while walking down the street is difficult, as the real world keeps distracting the player.

Pokemon GO, on the other hand, forces the players to play while walking down the street, while distracting them.

“[B]ecause the game essentially forces you to keep the app open and check it constantly, you are really not paying attention to where you are much of the time. Add in headphones, and the game can feel downright dangerous because of how much it engrosses you,” wrote Paul Tassi, Forbes contributor on video games, technology, and the internet.

Tassi spent a day playing the game and was almost hit by a bike twice and once by a car.

“I really do worry about kids playing this and not paying attention to where they are,” he wrote.

When you almost get in a car accident because of Pokémon Go…. oops

Almost got into an accident thanks to @bballLH_24 and Pokemon Go! #addicting

Meanwhile, criminals have already found a way to exploit the game.

The game allows players to purchase Pokecoins, about 100 for a dollar. Among other perks, one can buy a “Lure Module” for 100 coins—a feature that attracts Pokemon to a selected Pokestop for 30 minutes. The place will be highlighted on every players’ map, likely attracting nearby players to come and collect the extra critters.

The O’Fallon Police Department discovered a gang of four, at least one of them armed, that used the “Lure Module” function to lure players to a parking lot (and possibly other locations) to rob them.

“These suspects are suspected of multiple Armed Robberies both in St. Louis and St. Charles Counties,” the police wrote on its Facebook page. “If you use this app (or other similar type apps) or have children that do we ask you to please use caution when alerting strangers of your future location.”

From players’ online comments, it seems not uncommon for people to venture out and hunt for Pokémon in the middle of a night.

“The poor police here in Colorado, they stopped us last night to ask questions about the game, and remind us the park was closed. There were about 30 of us at midnight, running around a park. I felt like an idiot, because i know better,” user Trisha Abney commented on Facebook.

Another issue—the game lists as Pokestops and Gyms places that hardly lend themselves to loitering.

The Darwin Police Station in Australia has been designated a Pokestop, prompting the police to release a statement reminding users they don’t have to enter the station to collect the in-game reward and should look up from their phones when crossing a street.

Both the White House and Pentagon have been designated Gyms in the game, possibly putting players at odds with security.

“For safety’s sake, never play Pokemon GO when you’re on your bike, driving a car, riding a hoverboard, or anything else where you should be paying attention, and of course never wander away from your parents or your group to catch a Pokemon,” the website states.

But multiple online posts show people disregarding these warnings. It seems some players consider it faster to collect the little monsters by riding a bike or driving a car.

I pulled over and put my hazard lights on and pretended my car broke down just to catch me an Eevee #PokemonGo pic.twitter.com/vQUuxvq7YT

“I have not heard any confirmed reports of Pokemon GO-related injuries or accidents yet, but unfortunately, I think they’re inevitable,” Tassi wrote.