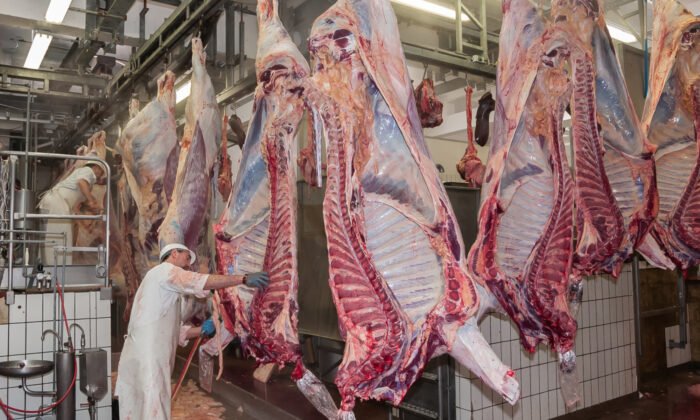 In 1906, Upton Sinclair came out with his book “The Jungle,” and it shocked the nation by documenting the horror of the meatpacking industry. People were being boiled in vats and sent to larders, rat waste was mixed with meat, and so on.

As a result, the Federal Meat Inspection Act passed Congress, and consumers were saved from ghastly diseases. The lesson is that government is essential to stop enterprise from poisoning us with its food.

To some extent, this mythology accounts for the wide support for government’s involvement in stopping disease spread today, including COVID and the catastrophic response.

Not only that, but the story is also the basis for the U.S. Department of Agriculture’s food inspection efforts, the Food and Drug Administration’s regulation of medical drugs, the central plan that governs food production, the Centers for Disease Control and Prevention, and the legions of bureaucrats who inspect and badger us every step of the way. It is the founding template for why government is involved in our food and health at all.

It’s all premised on the implausible idea that people who make and sell us food have no concern as to whether it makes us sick. It only takes a quick second, though, to realize that this idea just isn’t true. So long as there is a functioning, consumer-driven marketplace, customer focus, which presumably includes not killing you, is the best regulator. Producer reputation has been a huge feature of profitability, too. And hygiene was a huge feature of reputation—long before Yelp.

Sinclair’s book was not intended as a factual account. It was a fantasy rendered as an ideological screed. It did drum up support for regulation, but the real reason for the act’s passage was that the large Chicago meatpackers realized that regulation would hurt their smaller competitors more than themselves. Meat inspections imposed costs that cartelized the industry.

That’s why the largest players were the law’s biggest promoters. Such laws almost have more to do with benefiting elites than protecting the public. It was not really about safety, the best scholarship shows, but exclusionary regulation to raise competitors’ costs of doing business.

Still, there is more to this little-known history that speaks to the entire basis for government management of health. The legislation required federal inspectors to be on-site at all hours in every meatpacking plant. At the time, regulators came up with a shabby method for detecting bad meat, namely poking a rod into the meat and smelling the rod. If it came out smelling clean, they would poke the same rod into the next piece of meat and smell it again. They would do this throughout the entire plant.

But as Baylen J. Linnekin points out in “The Food-Safety Fallacy: More Regulation Doesn’t Necessarily Make Food Safer” (Northeastern University Law Journal, vol. 4, no. 1), this method was fundamentally flawed. You can’t necessarily detect pathogens in meat by smell. It takes a long time for bacteria to begin to stink. In the meantime, bacteria can spread disease through touch. The rod could pick up bacteria and transmit it from one piece of meat to another, and there was no way for inspectors to know about it. This method of testing meat most certainly spread any pathogens from bad meat to good meat, assuring that an entire plant became a house of pathogens rather than having them restricted to just one carcass.

“USDA inspectors undoubtedly transmitted harmful bacteria from one contaminated piece of meat to other uncontaminated pieces in untold quantities and, consequently, were directly responsible for sickening untold numbers of Americans by their actions.

“Poke-and-sniff—incredibly a centerpiece of the USDA’s meat inspection program until the late 1990s—was, in terms of its sheer efficiency at transmitting pathogens from infected meat to clean meat, nearly the ideal device.

“Add to this the fact that the USDA’s own inspectors were critical of the inspection regime from the start, and that the USDA abdicated its inspection role at hundreds of meat processors for nearly three decades, and it becomes quite apparent that instead of making food safer, poke-and-sniff made food and consumers less safe.”

Poke-and-sniff began in 1906 and was common until the 1990s. The USDA’s own website recounts the career of one meat inspector who praised the shift from the old practice, a practice that persisted longer than even Soviet communism.

When people teach about this history in a conventional classroom environment, they tell the story of meat-packing horror and the act’s passage. But there the story ends. There is a pervasive lack of curiosity about what happened next. Did the regulations achieve their aims? Did the situation improve, and if so, was this improvement because of the regulations or because of private innovations? Or did the problem get worse, and if so, can the worsening be traced to the regulations themselves?

These are the sorts of questions we need to ask not only about the long-ago past but our own experiences with government-managed disease control.

As for why bad practices last and don’t get weeded out through experimentation, this is the way it is with such agencies. Once a rule is in place, no one can seem to stop it, no matter how little sense it makes. You know this if you have ever been in the TSA line at the airport.

The sheer irrationality strikes me every time—and it strikes the TSA employees, too. They are taking away bottles of shampoo but allowing lighters on planes. Sometimes, they confiscate a corkscrew and other times not. They test your hands to make sure you haven’t been handling bombs, but the sheer implausibility is so apparent that the inspectors themselves can hardly keep a straight face.

It was this way with vaccine mandates, which stayed in place long after the public-health rationale for them had vanished. It became very clear that they neither stopped infection nor transmission, so there was no point in mandating them at all. Even after all benefits seem doubtful and reports of adverse effects exploded, people were still fired for refusing them. They still are.

Whenever government imposes a rule, it begins to operate as if on autopilot. No matter how brainless, damaging, irrational, or outmoded it happens to be, the rule ends up trumping the reasoning of the human mind.

This becomes a very serious matter regarding health. Ruling this sector of life, you don’t want an overlord who is unresponsive to new information, new evidence, and innovation—a regime that specializes in following a routine, no matter how bad, rather than improving itself with a testable goal in mind.

This is why in societies where such agencies rule, all things slip into a frozen state. This is why even today, Cuba seems like a tableau of the 1950s. This is why when the curtain was pulled back on East Germany and the old Soviet Union, we found societies that seemed stuck in the past. This is why the Postal Service can’t seem to innovate and why public schools are still structured as if they were in the 1970s. Once a government plan is established, it tends to stick, even when it is not achieving its aims.

The case of poke-and-sniff in meatpacking should serve as a warning for all measures that claim to improve our health, whether designed to protect us from disease, balance our diet, or bring us safety or any other reason. We live in a world of change and growing knowledge. Our lives and well-being depend on economic systems that can respond to change, extract that growing knowledge, and enable it to be used in ways that serve human needs.