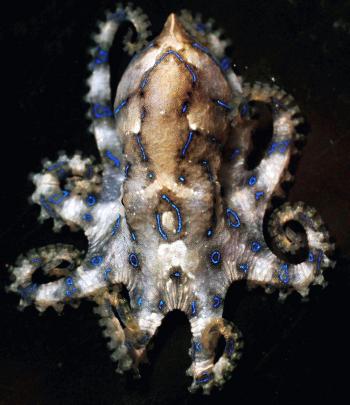 The blue-ringed octopus has a powerful venom that is a neuromuscular paralyzing toxin. Its bite can cause paralysis and then death if no medical treatment is sought. (Ian Waldie/Getty Images)
Science

The Poisonous Animals of Wild Australia

Observing a small arachnid crawling across my living room, I run to fetch a cup to trap it. Although I’ve dealt with many spiders in the past, this was the first time I observed a specimen possessing a pair of pincers and a tail raised ready to sting.

Suddenly I realized that this arthropod that had been covertly exploring the floors of my home in the quiet of night was no spider, but a Tityus trivittatus or three-banded scorpion. It is regarded as one of the most venomous subspecies found on this side of the continent. Although the neurotoxin released from its double stinger would probably not be fatal to a healthy adult, children and the elderly would most likely meet a cruel end under the effect of its sting.

The “post-scorpionic” psychosis that one could develop following a nocturnal encounter with T. trivittatus is a very real possibility. But the poisonous T. trivittatus is not alone. There is an incredible biodiversity of poisonous animals found on the Australian continent. While known more for the kangaroo, Australia abounds with poisonous species of every caliber. It holds eight of ten of the most venomous snakes in the world, as well as scorpions, spiders, and other poisonous animals found both in the sea and on land.

A perfect example is the “sea wasp,” considered the most venomous animal in the world.

Its name is strangely confusing, as the Australian sea wasp is not a buzzing insect but a jellyfish, and it is also known as a “box jelly.” While not every sting is fatal, the sea wasp has been known to give the touch of death to those who do not heed the warning signs posted in government restricted areas during the summer months.

It only takes a minuscule amount of venom from this animal to kill an adult human. Generally, after a mere three minutes following unlucky contact with this sea creature, the victim goes into cardiac arrest. The venom of the sea wasp is so deadly that even conscientious individuals intent on aiding one of its victims have to be careful not to touch the part of the body the jellyfish has stung. Annually, the sea wasp accounts for more deaths than all other marine animals combined.

A significantly smaller, but no less dangerous, jellyfish known as the irukanji or “Murdering Medusa” is so tiny that its toxin seems to play in tragicomic contrast with its size. Averaging only an inch long from the top of its bell to the end of its tentacles, the irukanji initially seems quite benign, but an encounter with one could be a fatal mistake.

While the sea wasp’s victims experience a painful sting quickly followed by venom-induced symptoms, an irukanji attack may not be evident for hours or even days. So when symptoms eventually do result, the victim doesn’t always connect them to an attack, often confusing the reaction with something else.

Curiously, these deadly creatures are also remarkably fragile. For example, they could never be kept in an aquarium as even a slight impact with a glass wall would kill them.

The blue-ringed octopus, apart from being ranked third among the most poisonous animals on Earth, is also one of the most colorful and beautiful to behold. But nature didn’t seem to have endowed the blue-ringed octopus with such beauty for spectacle and amusement, but as a clear warning for other creatures to keep their distance.

The animal, as its name indicates, is completely adorned with fluorescent blue rings, and although it often avoids humans, only one bite from its fangs will send the strongest man to the world of shadows. The blue-ringed octopus is often found in Australia’s Great Coral Reef, one of the ocean’s most biodiverse places.

If you decide to go for a walk on the beach, the best advice is to wear a pair of good shoes to avoid the sting of the rockfish. This aquatic chameleon is often found around coral, where it proves to be an expert at camouflage by effectively imitating the surrounding rocks.

While its venom isn’t often deadly, it inflicts one of the most intense pains a person can endure. The crystalline structure of the molecules of its defense quickly activates its victim’s pain receptors, making the creature one of the most poisonous (and painful) fish in the ocean. Generally, a rockfish wound lasts for months, resulting in scarring, and can continue to cause pain throughout the life of the victim. In reality, the venom of the rock fish doesn’t come from its bite but from the protecting barbs on its dorsal fin, which is frequently stepped on by bare feet on beaches in Australia.

Two relatives equally as respectable as the famous rockfish are the “scorpion fish” and “lion fish,” which can appear as a bunch of black-and-white or translucent-brown algae floating along with the current. However, like the rockfish, their spines can offer a painful sting when they act in defense.

Another animal that you should avoid stepping on in almost every coral reef of the world is the cone snail. While some species of cone snail inflict only pain on their victims, others are much more lethal. Their innocent appearance is in sharp contrast to the potential of their sting—death. The cone snail features an elongated proboscis that extends beyond its shell and possesses a sharpened tooth by which it expels a toxin capable of instant paralysis. Death by respiratory failure can descend on its victim in just a few minutes.

Another nonthreatening-looking creature is practically a symbol of Australia. But this animal, the famous platypus, also keeps a secret: venomous claws hidden under its hind paws. While they don’t have the strength to cause a fatality, their scratch can induce extreme pain.

Stingrays, found throughout the world’s tropical coasts, are usually quite docile. However, they too can reveal a violent side when threatened. The ray has a powerful stinger, shorter than its soft tail, capable of delivering a dose of painful venom. Sometimes this sting can even be fatal, such as in the case of Australian wildlife expert Steve Irwin, also known as the “Crocodile Hunter,” who was fatally stung in the chest by a ray in 2006.

Death in One Bite

When speaking of venomous animals, we can’t forget snakes. The most venomous specimen in the world, the taipan snake, is exclusive to the deserts of central eastern Australia. It is the most lethal not only among snakes but also among all land animals as well. Just one drop of venom could kill a dozen adults, and its victims generally expire in just a couple of hours.

Not only is taipan venom deadly, but it prevents blood from coagulating so the wound continues to bleed. As the poison makes its way through the blood stream, internal hemorrhaging results, and it destroys the victim’s internal organs.

Close relatives to the taipan snake are the deadly brown and tiger cobras. If we continue down the list of the world’s most venomous snakes, even the next three can be found in Australia.

Luckily, most people will never come across these poisonous snakes because they are found in remote areas. However, spiders are a different matter. Three types of the world’s most dangerous spiders can also be found in cities: the bald-red spider, the white-tail spider, and the funnel-web spider. The venom of the latter can kill a person in just 15 minutes, while the bald-red spider hails from the “black widow” family known for annually causing a significant number of deaths.

Not only are the animals venomous; some species of vegetation have also developed a deadly defense. One example is the Macrozamia moorei tree, which is full of toxins and carcinogens. Animals that accidentally feed off this plant develop paralysis in their hind legs that compromises their movement for the rest of their lives. However, Australian Aborigines are said to have engineered a process for rendering the Macrozamia fruit edible. The procedure involves leaving the fruit in water for a week and then tossing it into the fire.

The great island of Australia is full of a unique biodiversity, and this is certainly true of its unique selection of venomous creatures. In fact, the region features the world’s only species of poisonous bird—the hooded pitohui. Its habitat is found in New Guinea, only a few miles from the continental island.

But so many poisonous creatures need not be viewed as a negative attribute. Walking through this wild land requires a special kind of attention. Scanning for potentially harmful teeth, stingers, or pincers, one can’t help but develop a greater respect for the natural world.