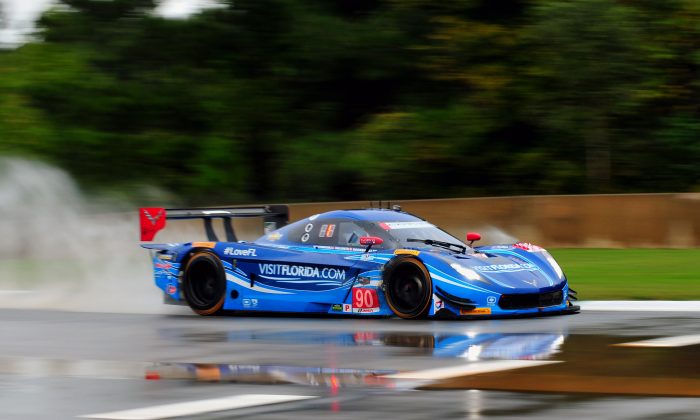 Porsches Win and Lose 1–2 in GTLM
By Chris Jasurek

BRASELTON, Ga.—Richard Westbrook drove through steady rain on a soaking track to win the Prototype class pole for Saturday’s Tudor United Sports Car Championship Petit Le Mans. It was the first pole of the season for the points-leading #90 VisitFlorida.com Coyote-Corvette Westbrook co-drives with Michael Valiante (and also Mike Rockenfeller for the ten-hour endurance event.)

Westbrook turned in a lap of 1:27.860 at 104.075 mph, 1.72 seconds quicker and 1.66 mph faster than the second place qualifier—a huge gap for the highly competitive Tudor series which could say more about qualifying versus racing set-up than about the outright speed of car and driver.

Westbrook was certainly going all-out for the pole. “I was pushing for sure, I was on the limit,” he said of his successful run. “The tires did take a long time to come in. No complaints, they were good going through the rivers, but it took a while to come in. There was a lot of moisture out there. Everyone was getting faster each lap so it was very important to keep going right until the end.”

Winning pole is more of a psychological than a real benefit in a ten-hour endurance contest like Petit Le Mans, but as Westbrook pointed out after qualifying, “With the rain it’s going to be nice to be out in front.” More rain is forecast for race day, and the opening laps around the 2.54-mile, 12-turn Road Atlanta track are likely to be sketchy, what with wet pavement and cold tires, and the excitement of the three dozen drivers in four classes drivers who will be looking for a last chance for a good result in 2015.

For Westbrook and Valiante, Petit Le Mans offers them a chance to win thr Prototype class championship. The pair lead the two Action Express Coyote-Corvettes by six points. Christian Fittipaldi qualified second in the #5 AXR car he co-drives with Joao Barbosa and Sebastien Bourdais; while Dane Cameron was in fifth fastest in the #31 AXR machine he shares with Eric Curran and Max Papis.

Third on the grid will be the car which is fourth in the points, The #01 Ganassi Riley-Ford EcoBoost of Joey Hand, Scott Pruett, and IndyCar champ Scott Dixon is only 11 points out of first, five behind the pair of Action Express cars, and quite quick as well—Hand turned a lap of 1:29.627 at 102.023 mph, only .707 behind Fittipaldi.

Ricky Taylor in the #10 Taylor Racing Dallara-Corvette qualified fourth, just under a second behind the #01. Taylor and co-drivers Jordan Taylor and Max Angelelli are only 16 points out of first, and will be pushing hard both to repeat at Petit and to bring home the championship.

Perhaps being ahead of the pack will be more of an advantage for Westbrook and company than usual.

Porsches Qualify Fastest in GTLM, but Will Start From the Back

Porsche North America finished one-two in GT Le Mans qualifying, with Earl Bamber in the #912 911 RSR taking the pole with his second-best lap, and Nick Tandy in the #911 car qualifying second. That success didn’t last through the session.

Bamber lost control coming downhill through the Esses about halfway through the session, and skidded across the sopping grass into a concrete wall.

“On my last lap we were getting quicker but I made a mistake in the fourth corner,” Bamber explained. “I hit a river and did an aquaplane. We’ve come away with a lot of 1-2 results so I think we are going to push for that tomorrow as well.

Bamber was unhurt but the car, which he shares with Jörg Bergmeister and Frederic Makowiecki, was too badly damaged to repair by race time, so the team will have to use their back-up car—which earns them the penalty of having to start from the back of the grid on Saturday.

Bamber’s quickest lap was tossed out because he caused a red flag which ended the session. However, his second-quickest lap was kept, and it was good enough to put him on the pole—except for the penalty for switching cars.

The #911 RSR co-driven by Nick Tandy, Patrick Pilet, and Richard Lietz, failed post-qualifying inspection due to a ride-height infraction, and was also relegated to the back of the grid.

These two penalties give the GTLM pole to third-quickest qualifier Oliver Gavin in the #4 Corvette Racing C7.R he shares with Tom Milner and IndyCar’s Ryan Briscoe.

Bamber cast a word of caution of conditions on race day: “[The rain is] going to be a big subject tomorrow. Even on the qualifying it was right on the limit to run for qualifying. Having a lot of rain over the last few weeks, there’s not much more the ground can take. It’s not like the track has bad drainage, it’s just that the ground can’t take that much more.

“Just having the break for 10 minutes and not having the 30 plus cars moving the water, it makes a big difference. But after a restart the water levels will have gone up so cautions are going to breed cautions.”

“Definitely an interesting way to get my first pole the way the weather is. It’s been tricky working with this rain, we weren’t sure what we were going to get,” Lawrence said after the session. “We kept pushing harder and harder on every lap and it felt like the conditions were getting worse. And then I just kept pushing deeper and deeper to put together a fast lap, and was able to get the pole.”

KImber-Smith and co-driver Mike Guasch are second in the PC title hunt, 12 points behind the #54 Core Autosports car of Jon Bennet and Colin Braun. Bennett qualified seventh, giving the #52 crew a bit more hope for a championship victory.

Like the other pole winners, Kimber-Smith was deeply impressed by the rotten weather. “It was very wet. It was all about trying to stay on track. The session was getting wetter toward the end. The Esses seemed to have more river flows than I’ve ever seen.

“Mowlem was pushing pretty hard, he’s not working toward a championship so he has nothing to lose. The way the weather has been, we don’t know what’s going to play out tomorrow. I really enjoy my racing but I really am wanting this championship.”

The Tudor United SportsCar Championship Petit Le Mans season finale takes the green flag at 11:15 a.m. Saturday, October 3. Tickets for the event are available through Road Atlanta‘s website, or at the gate.

For the unlucky fans who cannot attend in person, the race will be broadcast on Fox Sports 2 and IMSA.com. Here is the broadcast schedule:

There will also be a three-hour race review on Sunday, Oct. 4 on Fox Sports 1.