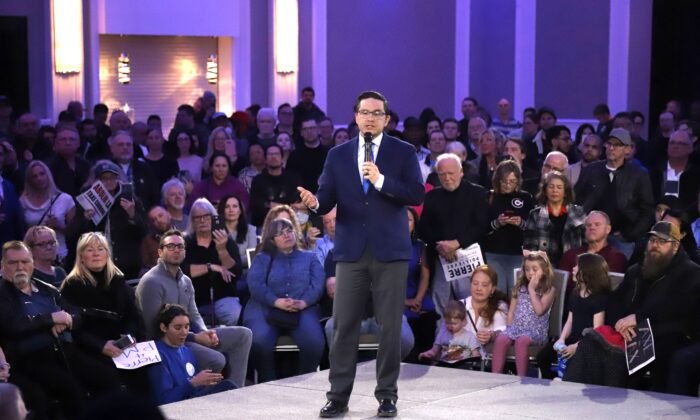 The campaign of Conservative Party leadership candidate Pierre Poilievre says it’s concerned about potential fraud in the current contest through the buying of memberships with prepaid credit cards.

“[O]ur candidate is concerned that the leadership might be won by a candidate who has openly acknowledged cheating, and appears unconstrained by integrity and rules in his pursuit of political offices,” reads a letter from a lawyer with Poilievre’s campaign sent to the party on April 12, obtained by Global News.

The letter reportedly does not provide any evidence of potential fraud nor does it directly accuse another candidate, but it quotes leadership candidate Brampton Mayor Patrick Brown saying that “everyone knows” that candidates buy memberships for their supporters and that he compares it to “jaywalking.”

A spokesman for Patrick Brown told Global that the campaign is following the rules of the race.

“Our campaign will continue to abide by all rules set out by the Conservative Party and Elections Canada. And we will win,” said Jeff Silverstein.

Reacting to the Global News story, Brown pointed to Poilievre having previously been found in non-compliance with the Canada Elections Act for illegal contributions after wearing CPC-branded clothing during a funding announcement while he was a cabinet minister.

“How will Pierre Poilievre ever be able to hold Justin Trudeau to account when he uses the same unethical playbook that Trudeau does?” said Brown while quoting the Global News story on Twitter on April 12.

Poilievre had worn a golf shirt with the Conservative Party logo and made a partisan claim during a federal funding announcement in July 2015 while he was a cabinet minister and a candidate for the upcoming October elections.

The elections commissioner found Poilievre had hence made a “non-monetary contribution” to his party and entered into a compliance agreement compelling him to broadcast the agreement on various channels.

Wayne Benson, the party’s executive director, sent a memo to campaigns on April 11 saying that prepaid credit cards are still accepted but will be watched closely.

“We work closely with our service provider, reviewing all transaction details, in order to assist in our fraud prevention activity,” Benson wrote in the letter obtained by Global News.

The Poilievre campaign was not satisfied and asked that memberships purchased with prepaid cards after Feb. 2 be cancelled.

“Absent an acceptable response by the close of business on April 14, 2022, our campaign will take appropriate steps to require the party comply with the Membership By-Law,” says the letter.