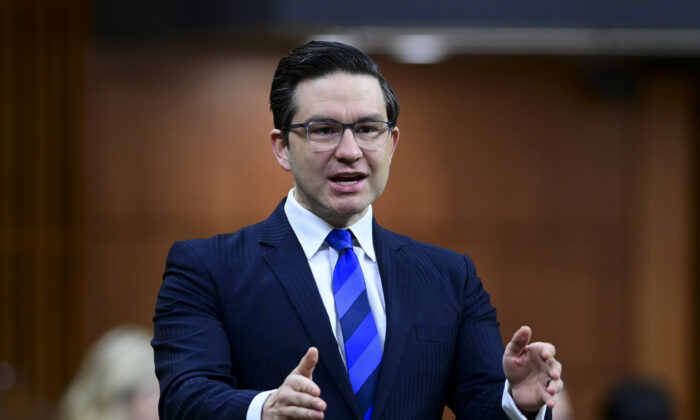 Saudi Arabia was Canada's second-largest crude oil exporter after the US in 2020, says Canada Energy Regulator
By Isaac Teo

During a campaign stop on Friday in Saint John, N.B., Poilievre said he will do so by banning imports from “polluting dictatorships,” doubling Newfoundland and Labrador’s oil production, and supporting projects that move western Canadian oil to eastern Canadian markets.

“We will ban oil from polluting dictatorships,” he said. “Overseas countries that are run by dictators that use money from their sales to fund terrorism or abuse their citizens’ rights and fail to meet our high environmental standards here in Canada, will no longer have the privilege to sell oil into the Canadian marketplace.”

Though most Canadian crude oil comes from the United States, nearly 25 percent was imported from other countries, according to the Canada Energy Regulator in its latest update on April 14, 2021.

Notably, the last time Canada imported Russian crude oil was in 2019 with almost 18,000 barrels per day. The same year, over 8,300 barrels a day came from Azerbaijan.

Poilievre said importing oil from “polluting dictatorships” is contradictory to the environmental policies pushed by the federal government in their efforts to reduce greenhouse gas emissions.

“No matter where it’s produced around the world, there will be impacts,” he said.

“You think that Nigeria has higher standards than Canada? Right now, we’re importing oil from Nigeria, Saudi Arabia, and other overseas countries. I would rather bring that production here to Canada, where we can ensure that the upstream production is at the highest environmental standard.”

He argued that the consumption of oil in Canada will continue no matter which party is in power or what environmental policies are in place, so the issue is not about having oil or no oil, but how Prime Minister Justin Trudeau has “increased our reliance on foreign oil.”

“Justin Trudeau supports oil—as long as it’s foreign oil. Every time Trudeau kills a Canadian energy project or pipeline, dictators like [Vladimir] Putin and [Nicolás] Maduro do a victory dance because it means they can dominate the international energy market,” Poilievre said.

“Here in Canada, meanwhile, we see our energy workers suffering, left behind. Welders, pipe fitters, energy workers, all suffering from the government’s attack on their sector.”

In October 2017, Calgary-based pipeline company TC Energy scrapped its Energy East project that sought to move crude oil from Alberta to East Coast refiners, under the watch of the Trudeau government.

In its withdrawal letter to the National Energy Board (NEB), the company said there “remains substantial uncertainty around the scope, timing, and cost associated with the regulatory review” of the project. “There is also the question of jurisdiction that arises from the NEB’s Decision.”

The ending of the Energy East project means Atlantic Canadian refineries have no pipeline access to crude oil from western Canada, making them reliant on imports from other countries.

Canada Action, a non-partisan organization that advocates for the development of Canada’s natural resources, says on its website that the Irving Oil refinery in Saint John “relies heavily on Saudi Arabia and the United States for oil supply.”

Poilievre said if he becomes prime minister he will support the 2018 plan by Newfoundland and Labrador’s government to double the province’s offshore oil production from 244,000 barrels a day to 650,000 barrels a day by 2030.

“That’s an extra 400,000 barrels of Canadian petroleum—more than enough to replace the 128,000 barrels a day that Canada has been importing from overseas,” he said. “It will also mean that more jobs are created here in Atlantic Canada.”

Poilievre also called upon the Trudeau government to “immediately” approve the 200,000 barrel-a-day Bay du Nord project, which would use a floating production unit for storage and offshore offloading to develop an oil field in the Flemish Pass.

“That one project alone would be enough to displace all of the overseas oil Canada is importing,” he said.

Environment Minister Steven Guilbeault has twice delayed ruling on the project due to opposition voiced by climate activists. He is expected to release a decision by mid-April.

Poilievre said he would support west-to-east energy projects like pipelines or rail construction to maximize the success of moving western oil to eastern markets, and displace “dirty dictators.”

“In other words, no more dollars for dictators. Instead, let’s have more paycheques for Canadian workers.”