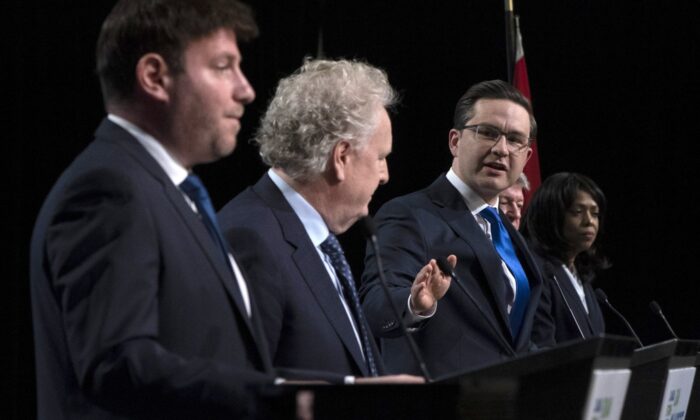 Poilievre adviser Jenni Byrne said on June 4 that 311,958 new members had signed up on the campaign website.

“Last night, Pierre’s campaign wrote CPC HQ asking it to publicly release the number of memberships sold through the http://pierre4pm.ca website. We encourage all campaigns to follow suit,” Byrne tweeted.

During the 2020 leadership race to replace Andrew Scheer, a total of 269,469 new members joined the Conservatives. The candidates at that time were former leader Erin O’Toole, former cabinet minister Peter MacKay, current MP and leadership candidate Leslyn Lewis, and former MP and current leader of the Ontario Party Derek Sloan.

The campaign of Patrick Brown, the current mayor of Brampton and former Ontario PC leader, also released figures on June 3.

“I’m so happy to announce that we have SMASHED our membership goal! And they’re still pouring in,” tweeted Brown, announcing that his campaign has signed up over 150,000 members.

Brown had skipped the first leadership debate, which was unofficial but attended by all of the other candidates, saying he was focusing on selling memberships.

The Jean Charest campaign didn’t release exact numbers but said it has a “clear path to victory.”

“We are excited to confirm that we have the points needed to win the Conservative Party leadership!” tweeted Charest on June 3, mentioning having recruited “tens of thousands of new members.”

The race will be decided by a point system with each of Canada’s 338 electoral districts being allocated 100 points or 1 point per vote, whichever is less. Candidates are then assigned a point total based on their percentage of the vote in each electoral district.

The final voters list will be provided to candidates before the end of July, after which candidates can make challenges to have suspicious members removed.

The issue of potential fraud was raised by Poilievre’s campaign in April when it asked that prepaid credit cards not be allowed to buy memberships. The party did follow with a ban of prepaid cards.

The Poilievre campaign noted Brown’s previous comment that buying memberships for supporters was a common practice he likened to “jaywalking.”

Lewis’ campaign told The Globe and Mail that she has signed up more members this time than in the 2020 contest. Lewis, who placed third at that time, will benefit from being the only social conservative in the current race.

Party president Robert Batherson also told the Globe that the Conservatives will break the record for the largest number of paid members of any political party in Canadian history.

The mail-in vote to decide the new leader will take place late in the summer and the results will be announced on Sept. 10.