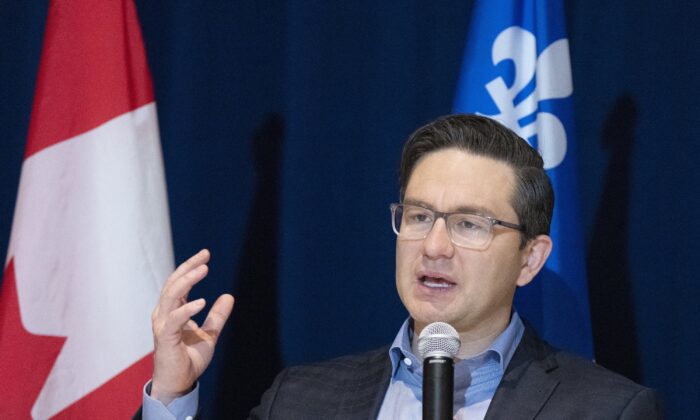 Prime Minister Justin Trudeau and Conservative Party Leader Pierre Poilievre were both in the Mauricie region of Quebec on Jan. 18 and sparred over who can do more for the environment.

“A Poilievre government will give the green light to green projects,” Poilievre said in French in the region’s main city of Trois-Rivières, coining what appears to be a new catchphrase.

He echoed what Premier François Legault said about the need to build more hydro dams to fuel the growing number of electric vehicles and added that red tape needs to be reduced to speed up project approvals.

When questioned about the Trudeau government’s investments in green projects, Poilievre said “we’re all for those industries and investments,” but he questioned what has been accomplished.

“He should have apologized to people for inflation that he imposed, for the bureaucracy he imposes, for the taxes he puts on the shoulders of the elderly and young workers. Instead he came here for more photo-ops and publicity. Big talker, little doer,” he said.

This week Trudeau visited different facilities in which the federal government has invested, including a rare earth elements processing plant in Saskatoon (Sask.), a vehicle assembly line in Windsor (Ont.), and an electric vehicle charging station factory in Shawinigan (Que.).

From Shawinigan, he said he was glad Poilievre was also in Quebec to hear about the green economy.

“I’m pleased to know that Mr. Poilievre is finally paying a little attention to Quebec, perhaps he’s actually going to listen to Quebecers and understand that you can’t have a plan for economic growth if you don’t have a plan to fight climate change,” he said.

Trudeau said Poilievre has not shown he understands that “fighting climate change” is the only way forward for the economy.

He also pushed back on the idea he was visiting Quebec because Poilievre is also touring the province.

It’s not because he’s here that I came to my home province, he said.

With reporters remarking that the visit from Trudeau and Poilievre in the region at the same time felt like a by-election was taking place, Poilievre said Trois-Rivières’ Mayor Yves Lévesque would make a good MP. Lévesque is a Poilievre supporter.

The Conservative leader suggested that due to Lévesque’s popularity his party could make a breakthrough in the area.

The riding of Trois-Rivières is currently held by first-time Bloc Québécois MP René Villemure. The Bloc took back the riding from the NDP in 2019, after holding it from 1993 to 2011.

The Progressive Conservative Party had the seat during the Brian Mulroney years (1984-1993).