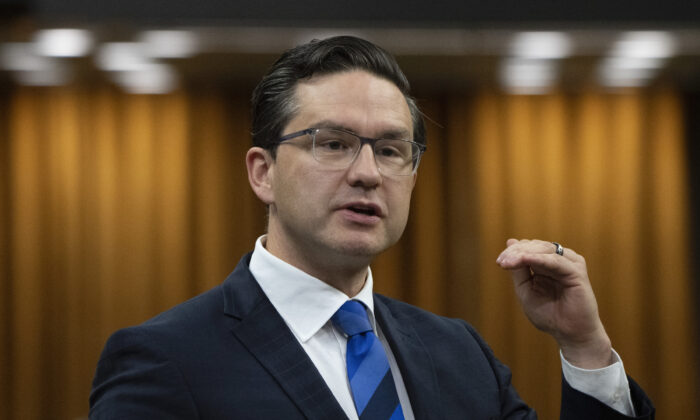 Pierre Poilievre pushed for cancellations of the Liberals’ carbon tax increases and Canada Pension Plan contribution hikes today during his first House of Commons question period as leader of the Conservative party.

“Housing prices have doubled. Grocery prices are at their highest inflation rate in 40 years. Canadians just aren’t able to pay. Will the Prime Minister cancel these tax increases on seniors and workers?” said Poilievre on Sept. 20.

“Previously, Canadians could pay for their housing with 32 percent of their paycheque, but that’s gone up to 50 percent,” he added.

On Sept. 13, Prime Minister Justin Trudeau announced the Liberals’ new inflation-relief measures that included a one-time top-up of $500 to the Canada Housing Benefit for those who spend at least 30 percent of their incomes on rent and also a doubling of the Goods and Services Tax (GST) credit for six months.

Trudeau also announced the first step in the Liberals’ national dental care plan, which will grant $650 per year for dental care to children under 12 who do not have access to dental insurance.

In total, the measures will be worth more than $4.5 billion.

Having increased Canada Pension Plan (CPP) contributions between 2017 and 2022, the Liberal government currently has a plan to gradually raise it to 11.9 percent in 2023 from 9.9 percent of earnings in 2019, leaving the employee and employer to each pay half.

Furthermore, what was a $20-per-ton federal carbon tax introduced in 2019 has risen gradually and is now $50 a ton.

Poilievre said amid spiking inflation and the rapidly rising cost of living, the Liberal government should take measures that could make daily life more affordable.

“After seven years of this prime minister in power, what’s his solution? To raise taxes on paycheques with higher EI and CPP premiums that will shrink paycheques and higher taxes on gas, groceries, and heat,” said Poilievre during question period.

Liberal MP Karina Gould said in response that EI and CPP “are things that are important for people who’ve lost their jobs or for seniors when they’re planning for retirement.”

Gould said her government has provided “real solutions” through recent child care subsidies, saying “families will be saving 50 percent” in child care costs by the end of the year.

Poilievre responded by saying many Canadians “can’t even afford to have a family in the first place” because of rising real estate costs and interest rates.

Neither Trudeau nor his deputy prime minister were present during today’s House proceedings. Trudeau is in New York City for the opening of the United Nations General Assembly, while Freeland was attending the funeral of former Liberal leader Bill Graham.

Lee Harding contributed to this report.