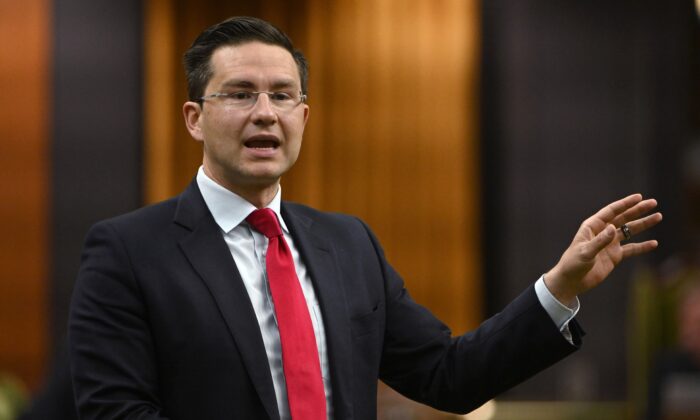 Conservative MP Pierre Poilievre rises during Question Period in the House of Commons in Ottawa on May 31, 2019. (Adrian Wyld/The Canadian Press)
Canada

Pierre Poilievre says he is running for prime minister. The firebrand Conservative MP and finance critic skipped announcing he was running to replace Erin O’Toole at the helm of the party and instead said he’s aiming to replace Justin Trudeau.

Poilievre published a video online on Feb. 5 to make his announcement. He opened with his familiar theme as finance critic, attacking the “money printing” of the government, which he says has increased the assets of the rich while generating high inflation and increasing the cost of living for everyday Canadians.

The longtime Ottawa-area MP made his pitch to advance core typical conservative principles, such as a freer business environment, freedom of choice over medical decisions such as vaccination, and freedom of religion.

“Here’s the problem: Trudeau thinks he’s your boss. He’s got it backwards. You are the boss. That’s why I’m running for prime minister—to put you back in charge of your life.”

Being one of the most vocal Conservative MPs, he is on everybody’s shortlist as potential replacement for O’Toole.

Geoffrey Hale, a political science professor at the University of Lethbridge, said one of O’Toole’s problems was his inability to offer a coherent vision of conservatism that could have broad appeal within the caucus.

“The challenge is, how do you define conservatism going forward, that first of all is not apologetic for who you are? Which is one of the selling points of Pierre Poilievre, the pit-bull that he is.”

Hale says Poilievre appeals to a segment of the party but must be able to define conservatism “with a constructive, optimistic vision that can connect with non-ideological suburbanites.” Another knock is that Poilievre can be perceived as the “angry face” of the party.

“One of the questions that he will have to deal with … is can he can combine his articulate defence of conservatism with a more nuanced, rhetorical style? And does he have the political skills to do it?” Hale said.

Tom Flanagan, a professor emeritus of political science at the University of Calgary and former Stephen Harper adviser, has a similar assessment while also noting that Poilievre is “the name that gets mentioned by people that I know who are unhappy with O’Toole.”

“A leader has to be able to do more than simply talk in public,” says Flanagan. “I think he does a good job in his critic role, I think he’s been very effective. Does that qualify him to be leader? Well, I don’t know. I mean, I honestly don’t know. I just haven’t seen him in caucus.”

Marco Navarro-Génie, president of the Haultain Research Institute, says Poilievre has “demonstrated a significant amount of talent, but there may be others who have not been very visible, who might throw their hat into a possible race and show possibilities and talent.”

With the Conservatives choosing to replace their leader and with the government only holding on to a minority, Navarro-Génie says this could favour more well-known candidates in order for the party to be back on its feet sooner and have a known commodity to present to electors.

Conservatives might have “put themselves at a disadvantage” by removing O’Toole, he said, but “the collateral for that on the other side is that it does give advantage to the potential challengers who are already well-known brand names among conservatives.”

During the last leadership race, to replace Andrew Scheer in 2020, Poilievre had considered making a run but did not enter, saying that it would be hard on his family. He did not back any candidate at the time and left open the door to a future run.

Poilievre, who represents the riding of Carleton, has already received the endorsement of former Conservative cabinet minister John Baird, who was another Ottawa-area MP, as well as support from some his MP colleagues like Michael Barrett, Jamie Schmale, Phlip Lawrence, and Jake Stewart.