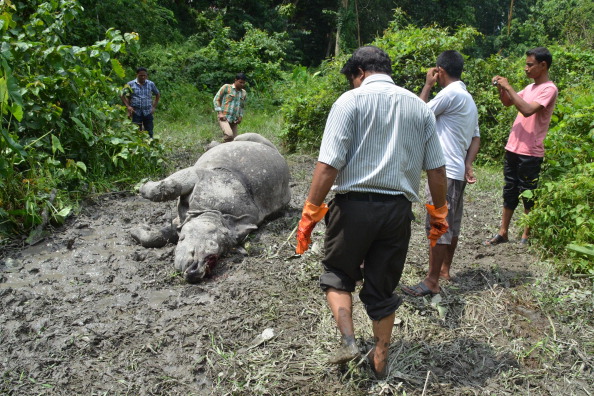 Indian forest officials stand near the body of a one horned horn Rhinoceros, which was killed and de-horned by poachers at Burapahar in Kaziranga National Park, some 250kms east of Guwahati on August 21, 2013. (STRDEL/AFP/Getty Images)
Environment

Rhinos (Rhinoceros unicornis) at Kaziranga National Park are not safe. Yet again, on Sunday one of the adult female rhinos of the park was killed and its horn chopped off by poachers. Although park rangers heard the gun shot and rushed to the spot, the subsequent rounds of fire between them and the poachers led to the death of one of the hunters while the rest succeeded in fleeing. The horn of the rhino was recovered, sadly as the evidence of the butchery and the prime reason why its original owner lay dead next to it.

It is the 15th rhino that has become victim to poacher’s gun this year in Kaziranga National Park in Assam, a World Heritage Site. The park is home to one third of the Greater One horned rhino or Indian rhino population in the world. The rest are distributed in Manas National Park and other sanctuaries of the state.

Since 19th March this year, a rhino has been shot dead almost each week in Assam. The recent history of the bloody battle is as follows,

30th April – Adult rhino shot dead and its horn taken by poachers near Borgung Camp on the western side of Burapahar Range of the Kaziranga National Park.

5th May – Adult female rhino killed and horn taken by poachers at Bagori Range of the park.

In this latest incident last Sunday (18th May) the rhino was shot dead at Debeswari Camp in Agratoli Range of the World Heritage Site. There were six poachers according to the forest officials who had entered the park probably through the Brahmaputra river side. They had already chopped off the horn of the animal when the rangers reached the spot. The poacher opened fire and in the ensuing fight between them, one of the poachers was killed.

“There is always the threat of poaching,” a park official said. “Poachers are always on the prowl to kill rhinos. Our staff were also on alert because we had intelligence inputs on poachers’ movement. But it is unfortunate that we couldn’t pre-empt Sunday’s poaching as there were no specific inputs about this killing. Soon after we heard gunshots, we fanned out to different parts of the range, and closed all exit routes. After relentless search operation, we traced a group of three poachers. The poachers opened fire at us. We retaliated and killed one of them.”

The forest guards are still on the hunt of the other poachers and believe they are hiding in the jungles. The difficult terrain and dense forest do not make it easy for the rangers to spot the perpetrators but the vigil is on, says an official.

It has been often said that villagers living in the periphery of the national park offer logistical support to poachers for finding a rhino and making the kill. Each rhino horn is a prized possession, sometimes said to have more value than gold of equal weight. It is sold in illegal markets in South east Asian countries.

Apart from the rhinos killed in Kaziranga, two other rhinos were killed in Manas and Pobitro wildlife sanctuary of the state this year.

It is unfortunate that a rhino lost its life once again in the hands of poachers in Assam. But what is even more disgraceful is the failed attempt to save its life by rangers who have been put in the forests to ward off situations exactly like this one. Inefficiency tied with bureaucracy is not helping resolve one major issue – that of saving each and every pachyderm roaming in the forest not after it has been shot by a poacher, but before a man with greedy intentions comes near it.

If poachers have a network of locals supporting them with logistics, it might be practical to use the same locals as associates of the forest rangers instead and not their enemies. When locals and communities begin to understand their roles as protectors and realise why the rhinos need protecting, the number of guardians of the forest will automatically increase hopefully saving a brutal end of the magnificent state animal.