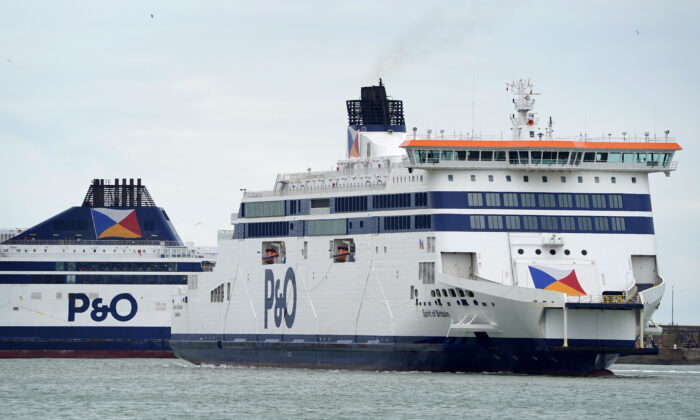 The Spirit of Britain arrives at the Port of Dover, in Kent, England, on April 27, 2022. (Gareth Fuller/PA Media)
UK

P&O Ferries resumed sailings across the English Channel for the first time since the firm suspended most of its sailings on March 17 following the sacking of 786 seafarers.

Spirit of Britain departed the English port of Dover for Calais, France, shortly after 11 p.m. on Tuesday carrying freight customers, with passenger services expected to resume early next week.

The ship was detained by the Maritime and Coastguard Agency (MCA) on April 12 after safety issues were found, but was cleared to sail on Friday.

It comes as another P&O Ferries vessel undergoes reinspection after it lost power at sea on Tuesday.

The European Causeway, which serves between Larne, Northern Ireland, and Cairnryan, Scotland, drifted in the Irish Sea five miles off the coast of Northern Ireland for more than an hour on Tuesday afternoon with cargo and passengers on board.

P&O said the accident was due to a “temporary mechanical issue” that had been resolved.

The ship, which can carry 410 passengers, had returned to port at Larne harbour “under its own propulsion, with local tugs on standby, where it will discharge its passengers and cargo as planned,” a spokesperson said on Tuesday.

The MCA said on Wednesday that suveyors were inspecting the ship, but stressed it does not mean the ship is under detention again.

“Our surveyors are carrying out a full inspection of P&O Ferries vessel European Causeway. This follows the mechanical failure while it was at sea yesterday,” the agency said in a statement.

“It is important to note that this does NOT mean the ferry is under detention but will be inspected before it returns to full service,” it added.

“There are no further inspections of P&O Ferries at the moment but we will reinspect when requested by P&O Ferries.”

P&O Ferries, which was bought by Dubai-based logistics giant DP World in 2019, fired 786 UK-based seafarers without any prior notice on March 17 and later replaced them with agency workers who are paid well below the UK’s minimum wage, citing a £100 million ($132 million) year-on-year loss.

British Transport Secretary Grant Shapps subsequently ordered the MCA to carry out detailed inspections of all P&O vessels under the PSC regime—which is the inspection of foreign ships in national ports to verify that the condition of the ship and its equipment comply with the requirements of international regulations and that the ship is manned and operated in compliance with these rules, according to the International Maritime Organization.

A total of eight ferries are subject to inspections, with four vessels—including the European Causeway—having been cleared to sail, two failing the inspections, and two awaiting inspection.

The European Causeway was detained on March 25 after it was deemed “unfit” to sail “due to failures on crew familiarisation, vessel documentation, and crew training,” and released on April 8 following reinspection.

Meanwhile, the transport secretary told a parliamentary select committee on Wednesday that the government will introduce new legislation that requires UK ports to check whether ferry crews are paid at least the national minimum wage.

Shapps told MPs that P&O Chief executive Peter Hebblethwaite, who previously acknowledged that the company broke the law by not consulting with trade unions before implementing the decision, “will have to go.”

He added that the company “will have to pay the minimum wage” when new legislation is introduced.