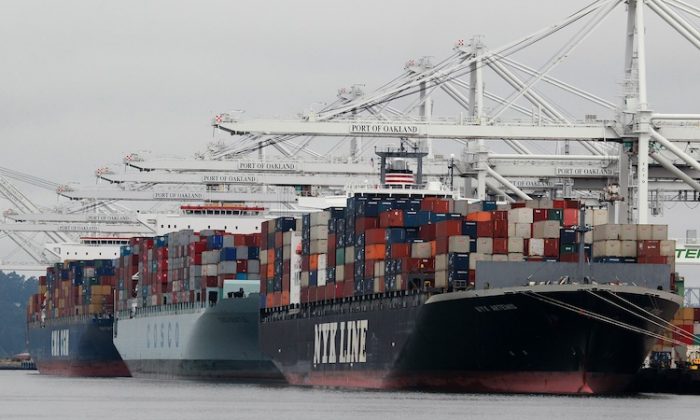 A worker is struck in the face with sparks from molten steel flowing into casts at the TAMCO steel mini mill in Rancho Cucamonga, Calif., on Oct. 4, 2002. (David McNew/Getty Images)
China

During the first year of the Great Recession in 2008, when financial apocalypse descended, markets collapsed, and the economy buckled, America lost 900,000 manufacturing jobs.

In 2001 the country had suffered a much more damaging—but quieter—blow: 1.5 million jobs in the manufacturing sector were eliminated. There was no major recession in 2001. Instead, it was the first year since U.S. policymakers had instituted Permanent Normal Trade Relations (PNTR) with the People’s Republic of China.

Normal Trade Relations means that a country receives the lowest tariffs that the United States provides. Countries like England are able to trade normally with the United States, but North Korea can’t. Prior to 2000, China’s trade status was decided anew every year, and though there was some uncertainty, normal trade was never denied.

Then, President Clinton and Congress decided to make that arrangement permanent, on promises of a booming domestic market in China for U.S. exports, and an improvement in the Chinese communist regime’s human rights record. Granting China PNTR was also a condition of its entering the World Trade Organization.

But the opposite of both those outcomes actually happened: in China, human rights abuses worsened, and in the United States millions of jobs were lost, shifted to China. The Chinese regime continued with nontariff import barriers, while it produced goods for export to the United States.

Two recent academic papers show that PNTR with China was bad news for the manufacturing sector in the United States.

The most recent, titled “The Surprisingly Swift Decline of U.S. Manufacturing Employment” by Peter Schott of Yale University’s School of Management, and Justin Pierce of the Federal Reserve Board, provides a meticulous exploration of the data on U.S. job loss following PNTR with China.

It shows that the key means by which PNTR damaged U.S. manufacturing jobs was that it eliminated uncertainty around the granting of normal trade relations to China—an annual, often politicized process. Once that uncertainty was taken away in October 2000, it was open season for U.S. multinational companies to shift their manufacturing facilities to China.

Between 2001 and 2007, absent the change in policy, jobs in the manufacturing sector would have risen by nearly 10 percent. Instead, they declined more than 15 percent. “Manufacturing employment would have been higher by over 4 million employees in 2007 without the effect of PNTR,” says Schott and Pierce’s paper.

A number of researchers have looked at the impact China has had on U.S. manufacturing jobs, but those studies have sometimes been sidelined because of the perceived background of the sponsoring institution. In this case the Pierce and Schott study stands as a powerful contribution by mainstream academia to an argument that U.S. manufacturing groups have been making for years.

It goes along with one done by Massachusetts Institute of Technology professor David Autor and colleagues, published last year. That study, titled “The China Syndrome: Local Labor Market Effects of Import Competition in the United States,” also paints a grim picture on the realities of trade with China.

The report says, “The rapid increase in U.S. imports of Chinese goods during the past two decades has had a substantial impact on employment and household incomes, benefits program enrollments, and transfer payments in local labor markets exposed to increased import competition.” In other words, a general decrease in incomes. “These effects extend far outside the manufacturing sector, and they imply substantial changes in worker and household welfare,” the paper says. Welfare in this case refers to economic well-being.

“These studies strongly reinforce a conclusion that we came to in the late 1990s, which is that trade expansion with China, especially WTO entry, was mainly not about enabling U.S.-based manufacturers to supply China,” says Alan Tonelson, a research fellow at the U.S. Business & Industrial Council Educational Foundation, a Washington research group.

Instead, he says, “It was to create the opportunity for U.S. companies to go to China and set up factories and labs and hire workers, at a much lower cost, in a much less regulated production environment, where substantial subsidies are available,” and then sell things back to the United States and the rest of the world.

Tonelson added: “Market access to China was never the priority; it was the pretext, and the pretext only.” He says the real supporter of the plan was multinational companies which fill the coffers of politicians’ electoral campaigns, and were keen to lower their costs of production by shifting manufacturing to China.

Another publicly stated goal of granting China PNTR was to pave its way into the World Trade Organization, effectively welcoming it into the community of nations, and therefore over time improving human rights conditions in the communist country.

But that didn’t work either. “After ten years, it’s clear that China is not living up to its promises or the unrealistic expectations of its supporters. Far from becoming freer, the Chinese people are burdened with limited or no rights to basic freedoms of speech, religion, and assembly,” said Sen. Sherrod Brown (D-Ohio) at a hearing about China’s 10 years in the WTO, held in 2011.

Carolyn Bartholemew, a former vice chair of the U.S.-China Commission, a committee that reports to Congress on China, said at a recent forum in Washington: “During President Clinton’s administration, it was pitched: get China into the World Trade Organization, and the markets in China would open up to U.S. goods and services and it would solve all the problems.”

This was a belief that the WTO would force China to change, to do business according to the established practices of countries with functioning legal systems and democratic governments around the world.

“But there had been concern even at the time: would China change the WTO, or would the WTO change China? And indeed there are changes happening in the WTO, which was developed as a dispute resolution mechanism,” Bartholomew said. “Now if you go to file a case against China, it is considered a hostile action. So it has changed the very nature of what’s happening there, and that has impacts.”