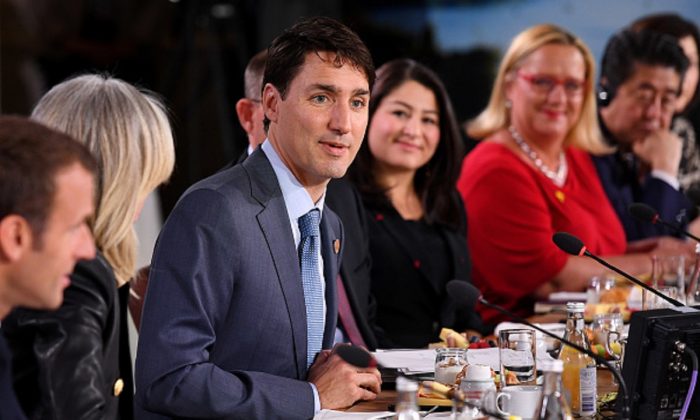 OTTAWA—Prime Minister Justin Trudeau dropped his insistence that his government has done nothing wrong in the SNC-Lavalin affair after a second cabinet minister in less than a month resigned Monday, March 4.

Treasury Board president Jane Philpott handed in her resignation Monday afternoon, saying she’s lost confidence in the way the government has dealt with criminal charges against the Montreal engineering giant.

Her resignation came after former attorney general Jody Wilson-Raybould resigned from cabinet amid allegations that the Prime Minister’s Office improperly pressured her to stop a criminal prosecution of SNC-Lavalin.

At a rally Monday night in Toronto, Trudeau did not repeat the same message he’s delivered since the controversy erupted a month ago, that no undue pressure was exerted, that the government was balancing its concern for the fate of 9,000 SNC-Lavalin employees with respect for the independence of the justice system.

Rather, he adopted a more conciliatory tone that appeared to allow for the possibility that a line may have been crossed.

“In a democracy like ours and in a space where we value our diversity so strongly, we’re allowed to have disagreements and debate. We even encourage it. This matter has generated an important discussion. How democratic institutions, specifically the federal ministry and the staff and officials that support it, conduct themselves is critical and core to all of our principles,” Trudeau said.

“Concerns of this nature must be taken very seriously and I can assure you that I am,” he added, saying that he’s “listening carefully to the various voices, testimonies and opinions” of witnesses at the House of Commons justice committee.

Prime Minister Trudeau dropped his insistence that his government has done nothing wrong in the SNC-Lavalin affair after a second cabinet minister in less than a month resigned #SNCLavalinScandal #SNCLavelin #justintrudeau #canada #canpoli #procurement https://t.co/sNDOkFgHz2

Trudeau went out of his way to thank Philpott for her service and praise her various accomplishments. And he said her decision to resign was not a surprise.

“I know Ms. Philpott has felt this way for some time and, while I am disappointed, I understand her decision to step down.”

In her resignation letter to Trudeau, Philpott pointed out that a cabinet minister must be able “speak in support of the government and its policies” at all times.

“Given this convention and the current circumstances, it is untenable for me to continue to serve as a cabinet minister,” she wrote.

Trudeau named Carla Qualtrough, the minister of public services and procurement, as the acting president of the Treasury Board.

Conservative Leader Andrew Scheer said Philpott’s resignation proves he was correct when he asserted last week that Trudeau has “lost the moral authority to govern.”

“Today, a senior member of his inner circle has come to the same conclusion,” said Scheer, repeating his call for Trudeau to resign and for the RCMP to investigate. “Jane Philpott’s resignation from cabinet clearly demonstrates a government in total chaos, led by a disgraced prime minister consumed with scandal and focused only on his political survival.”

Justin Trudeau cannot continue as PM given his unprecedented political interference in the course of justice. Last week, I said he had lost the moral authority to govern. Today, a senior member of his inner circle came to the same conclusion. My statement: https://t.co/lNe7DbQO5s pic.twitter.com/yIXZLX4J6M

Scheer called on other cabinet ministers to follow Philpott’s example or be seen as part of the “ethical rot that infects this government.”

New Democrat Leader Jagmeet Singh reiterated his call for a public inquiry into the affair.

Like Wilson-Raybould, Philpott said she intends to remain a Liberal MP—for Markham-Stouffville outside Toronto, in her case. But unlike Wilson-Raybould, she did not say whether she intends to run for re-election as a Liberal this fall, although she has already been nominated. There has been some speculation in Liberal circles that Philpott might run for leader of the Ontario Liberal party.

Philpott’s resignation was not entirely unexpected among Liberals, who knew she and Wilson-Raybould are close friends. Indeed, when Wilson-Raybould resigned from cabinet, Philpott tweeted a picture of the pair with their arms around each other.

In a tweet praising Philpott’s “constant and unassailable commitment to always doing what is right and best for Canadians,” Wilson-Raybould told her friend: “You are a leader of vision & strength & I look forward to continuing to work alongside you.”

The pair’s departure is a blow to Trudeau’s brand. Both women were star candidates for the Liberals during the 2015 election and their initial appointment to prestigious cabinet posts was emblematic of Trudeau’s commitment to gender equality. Wilson-Raybould, the country’s first Indigenous justice minister, also embodied Trudeau’s vow to make reconciliation with Indigenous Peoples his top priority.

Wilson-Raybould last week delivered bombshell testimony at the House of Commons justice committee, accusing officials of relentlessly pressuring her and even issuing veiled threats to co-operate in helping SNC-Lavalin avoid a criminal prosecution. The company is a pillar of Montreal’s business community, employs some 9,000 people across Canada and is a major player in infrastructure projects both inside and outside Canada.

Trudeau and his officials allegedly leaned on Wilson-Raybould to reverse a decision by the director of public prosecutions to proceed with a criminal trial of SNC-Lavalin on charges of bribery and corruption related to contracts in Libya. Instead, they wanted her to order negotiation of a remediation agreement with the company that would have levied stiff financial penalties but removed the prospect of a criminal conviction that could cripple the company financially and hurt innocent employees, pensioners and suppliers.

Remediation agreements are lawful tools in dealing with corporate corruption. As attorney general, Wilson-Raybould would have been legally entitled to instruct the director of public prosecutions on how to deal with SNC-Lavalin. The controversy hinges on whether Trudeau and his officials pushed her too hard to do so.

While Wilson-Raybould called the pressure tactics inappropriate, she said she did not think they were illegal—a distinction Philpott did not make.

“Unfortunately, the evidence of efforts by politicians and/or officials to pressure the former attorney general to intervene in the criminal case involving SNC-Lavalin, and the evidence as to the content of those efforts have raised serious concerns for me,” Philpott wrote.

“The solemn principles at stake are the independence and integrity of our justice system. It is a fundamental doctrine of the rule of law that our attorney general should not be subjected to political pressure or interference regarding the exercise of her prosecutorial discretion in criminal cases. Sadly, I have lost confidence in how the government has dealt with this matter and in how it has responded to the issues raised.”

The next round of testimony on the affair is to come Wednesday. Trudeau’s longtime friend and former principal secretary Gerald Butts, whom Wilson-Raybould tagged as one of the sources of pressure on her, is scheduled to appear before the justice committee at 10 a.m. ET.

The same afternoon, Privy Council clerk Michael Wernick and deputy minister of justice Nathalie Drouin are to appear. Both testified earlier at the committee but that was before Wilson-Raybould fingered Wernick as the person who allegedly issued veiled threats and suggested Drouin was a witness to some of the pressure tactics.

New Democrat MP Charlie Angus wrote to Trudeau on Monday, arguing that Wernick’s impartiality as the country’s top public servant had been irreparably compromised and demanding his resignation.

Philpott has been widely seen as one of Trudeau’s most capable ministers. As minister of health, she worked with Wilson-Raybould in legalizing medical assistance in dying. As minister of Indigenous services, she oversaw drastic reductions in the number of long-term advisories on water safety on First Nations reserves.

She was moved to Treasury Board in mid-January in the same shuffle that saw Wilson-Raybould moved out of the justice portfolio into veterans affairs. Treasury Board is a less-visible ministry concerned with the nuts and bolts of government operations but the president effectively holds the government’s purse strings, overseeing all federal spending. Philpott took over the post from Scott Brison, who retired from politics.

Whether Philpott and Wilson-Raybould will remain in caucus is not certain, although Trudeau’s remarks Monday night seemed to suggest they will. Earlier in the day, before Philpott’s exit, he said he was still reflecting on Wilson-Raybould’s future in the party.

If he were to kick the pair out of caucus, he risks having at least a few Liberal backbenchers join them in political exile.

Liberal backbencher Celina Caesar-Chavannes, who announced last week she won’t seek re-election, tweeted her support Monday for Philpott, as she has done repeatedly for Wilson-Raybould since the SNC-Lavalin controversy erupted a month ago.

“When you add women, please do not expect the status quo. Expect us to make correct decisions, stand for what is right and exit when values are compromised. Thank you janephilpott for articulating this beautifully,” Caesar-Chavannes wrote.

I was not too impressed with Celina, nevertheless, another Liberal woman MP, three in the last month, the second from Ontario, decides not to continue with Justin: Liberal MP Celina Caesar-Chavannes not running in October election | CBC News https://t.co/0vJTSH3R3a

New Brunswick Liberal MP Wayne Long reiterated his call for a “full and transparent investigation” into the SNC-Lavalin affair.