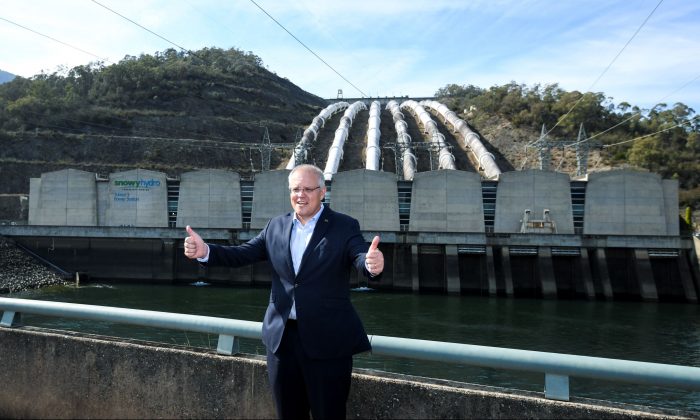 A Coalition government will not cause wholesale electricity prices to jump or damage the health of Australian paychecks and still meet its U.N. mandated targets to reduce carbon emissions, the prime minister has said.

“We will meet our global commitments and do what is right for our environment, without taking a wrecking ball to the economy,” Prime Minister Scott Morrison said in a public statement on Feb. 25.

“We also have an obligation to hand over a strong economy, where our kids and grandkids can get jobs.”

Scott Morrison, who is leading the centre-right Liberal-National Coalition to the upcoming federal election, said that achieving the targets that have been proposed by the left-leaning Labor opposition will come at an extra A$472 billion ($337.7 billion) cost to the Australian economy. At the same time, members of the Coalition represent contrasting views on climate policy, with some party members like Tony Abbott still publicly questioning the fundamental premises of climate policy.

“[It would] slash more than 336,000 jobs, cut the average wage by over $9,000 a year, and increase wholesale electricity prices by more than 58 per cent,” Morrison said in an opinion piece published by Fairfax Media. “In short … shutting industries and businesses down.”

Labor said that if elected, it would work to reduce CO2 emissions by 45 percent by 2030 based on 2005 levels, compared to the 26 percent that Australia ratified under the Paris Climate accord, without providing details on how the abatements would be achieved. Labor said it would also commit to generating 50 percent of the nation’s electricity from renewable energy sources.

However, the prime minister believes the opposition’s targets cannot be achieved without costing the economy.

“You can’t achieve that any other way,” he added at a press conference. “So they’re either lying about the targets they are setting, or they are lying about the impact, on jobs, especially in heavy industries and the agricultural sector.”

The prime minister recently announced a new A$3.5 billion ($2.5 billion) Climate Solutions Package through which the government will continue to implement action to reduce carbon emissions.

A key strategy in the Coalition’s plan will be meeting Australia’s 2030 Paris climate commitments through “practical” means by working with landholders, farmers, businesses, and indigenous communities.

This includes another A$2 billion ($1.43 billion) in investment towards a Climate Solutions Fund that works with the existing Emissions Reduction Fund (ERF) to reduce greenhouse gas emissions across all sectors of the economy.

The ERF, which received an initial A$2.55 billion ($1.83 billion) tax-payer investment in 2014, has already purchased 193 million tonnes of carbon from businesses and land managers who have adopted approved practices like capturing methane from landfills to produce electricity.

According to the government, its cash injection will help ensure that the ERF reduces carbon emissions by a further 103 million tonnes no later than the year 2030, enabling the bulk of the 26 percent emissions reduction target under the Paris agreement to be met.

“The ERF is investing in our farmers to help them revegetate degraded land, to protect existing forest areas, and to increase habitats for our native species,” Federal Minister for the Environment Melissa Price said in the public statement. “We are working with businesses to invest in the adoption of energy efficient business practices that are reducing costs, and working with waste managers and with recyclers to reduce waste emissions.”

To support renewables, the Coalition’s package also includes more funding for the Battery of the Nation Project in Tasmania and its $56 million Bass Strait interconnector, which will provide a 1,200 megawatt boost in renewable hydroelectricity from Tasmania to the mainland.

The broader energy industry will also continue to receive ongoing subsidies for renewables through the Renewable Energy Target, which is set to deliver a mix of at least 23 percent energy from renewables by 2020.

In the transport sector, the government said it is introducing a National Electric Vehicle Strategy aimed at addressing barriers for more ownership of electric vehicle technology.

To end the price gouging by Australia’s big, vertically-integrated power companies, the government said it is working on a plan with states and energy companies to regulate energy prices. “Gentailers” have been gaming the system by selling electricity between their generation and retail businesses at inflated prices.

Morrison added that the Coalition is on-track to exceeding Australia’s first direct action emissions target that was set under the Kyoto Protocol to reduce emissions by 236 million tonnes no later than the year 2020, or 13 percent below 2005 levels by 2020.

“We’re absolutely on track to meet our 2020 Kyoto emissions reduction target and that’s no small feat.”

He added that after inheriting a 755 million tonne projected deficit on the 2020 goal from Labor in 2013, “we are now expecting to over-achieve on the target by 367 million tonnes–a 1.1 billion tonne turn around.”

However, the government has been questioned on how it plans to consider this extra 367 million tonne of carbon emissions in its calculations for meeting the Paris agreement after Senator Simon Birmingham said in Senate estimates that the government “would intend to use carry over if required.” Jo Evans, deputy secretary of the Climate Change and Energy Innovation Group, said that Australia was not criticised at the most recent U.N. climate conference in Poland for supporting the use of carryover credits to achieve its abatement goals.

Federal opposition and Labor Party leader Bill Shorten has echoed the Coalition’s promise for lower power prices with his own proposal in November 2018 when he announced that Labor would introduce a new national target of one million household battery installations by the year 2025, if he wins the next election.

Labor policies will also continue to support renewables as it pushes for the eventual replacement of all coal-fired power stations.

Shorten said on Feb. 25, “Labor has a plan for more renewables, less pollution, and lower power prices and, unlike the Liberals, our plan wasn’t written by [former Prime Minister] Tony Abbott.”

The party said it has proposed a coal transition plan that will address the unemployment for workers in the sector as they find new jobs. The plan would include $10 million for skills training in the renewables sector.

Labor has also said it will continue to support the small-scale renewable energy (SRES) scheme until 2030 when the RET scheme ends. The Coalition said that it would consider revising the SRES after a 2018 ACCC report called for the scheme to be abolished by 2021 to “reduce its impact on retail prices paid by consumers.”

The report found that the scheme has subsidised households with solar power by $538 each year for the excess solar power sold back to the grid at a premium price. Under the current RET schemes, taxpayers will end up paying $2.8 billion a year in subsidies alone for renewable energy, according to a 2017 report by economic consultancy BAEeconomics.

Meanwhile, the Coalition announced that it has decided to approve the Snowy 2.0 pumped hydro-electric plant, which was given the green light by Snowy Hydro Board members back in December 2018.

Under the plan, water would be pumped uphill when electricity is cheapest into a dam to be released when dispatchable energy is needed to meet shortfalls in the grid that have occurred when intermittent renewable power generators or ageing coal-power stations go offline.

“If you want to transition over time to a renewable future for energy, then you cannot do it without stations like this and stations like in Tasmania,” Morrison said on Feb. 26. “As we all know, the wind does not blow all the time and the sun does not always shine.”

With a 250 percent increase in renewable energy coming online over the next three years, Morrison said that the Snowy Hydro project will act to firm up the east coast’s power supply.

The A$4.5 billion ($3.2 billion) project will increase the capacity of the existing 4,000 megawatt Snowy Mountains Hydro Scheme by 2,000 megawatts. When full, the dam stores enough water to generate over seven days of power for 500,000 homes at peak demand.

The expansion is hoped to ensure that electricity remains dispatchable during prolonged “droughts” in wind or solar power generation, which will make electricity more affordable.

Up to A$1.38 billion ($1 billion) in federal funding will be provided, while the remainder will be financed by Snowy Hydro. The government lauded that up to 2,400 construction jobs and up to 5,000 direct and indirect jobs will be created across the Snowy Mountains region as the power plant is built.