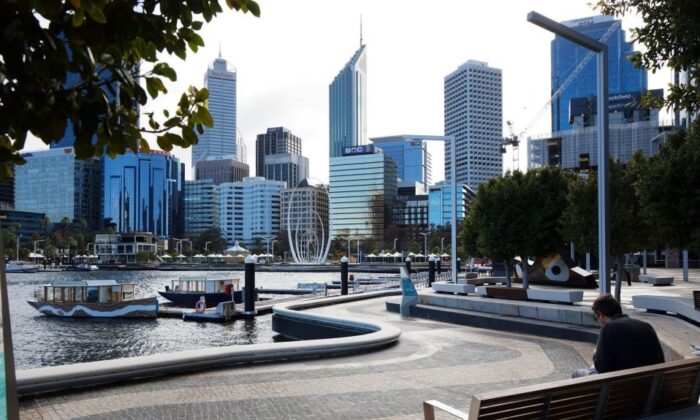 A view of Elizabeth Quay in Perth, Australia on Jun. 29, 2021. (Photo by TREVOR COLLENS/AFP via Getty Images)
Australia

After touching down in Western Australia (WA), Prime Minister Scott Morrison has made quick work of unveiling a $74 million (US$54 million) federal boost towards the development of key projects in the state’s capital, Perth.

It brings the total Perth deal to $1.69 billion (US$1.24 billion), including a new university campus in the heart of the city, a new bridge over the Swan River, and several upgrades to cultural locations across the city.

To help accelerate the construction of the new pedestrian and cyclist bridge over the Swan River, both state and federal governments have added $25 million (US$18 million) to the project, bringing the cost to $100 million (US$73 million).

It is estimated major works will begin in 2022.

“This is a once-in-a-lifetime transformation of our city centre, attracting thousands of people into the heart of the city during the day and night, creating activity and vibrancy throughout our CBD,” McGowan said.

Prime Minister Scott Morrison emphasised that the deal was made possible due to cooperation between local, state, and federal governments.

“The Perth City Deal was a long term partnership between all three levels of governments and the private sector to bring more jobs, more investment to WA that will create a stronger economy and a stronger future for Perth,” Morrison said.

“The new ECU campus will not only reinvigorate Perth’s city centre, but it will redefine Western Australia’s higher education offering by bringing together more than 10,000 students plus staff generating tourism, filling up bars, restaurants and hotels and bringing more people to local shops and businesses.

“The new Swan River Bridge, which will be built and manufactured locally in Western Australia, will become an iconic part of the Perth skyline across the river, providing better transport connections to and from the CBD.”

Morrison’s visit to WA comes ahead of the Australian federal election, with the prime minister lauding the state as the “powerhouse of Australia’s export earnings” after resources and energy exports reached a record $349 billion (US$255 billion) in 2021.

Morrison has also brought up his efforts in helping secure a bigger share of the federal goods and services tax (GST) for WA, which is estimated to bring in on average $2.6 billion (US$1.9 billion) every year.

However, polling by the Greens released to WAtoday has indicated that, if representative to voter turnout on the day, the Liberal Party could lose six crucial seats in the upcoming election.

In response to concerns of unfavourable polling results, Morrison took a jab at the Federal Labor Party and told voters it could not be compared with the incumbent WA Labor Party.

“It’s our government that has supported the resources industry. It’s the Labor Party that didn’t move on GST when they had the opportunity,” Morrison told reporters.

“State Labor is completely different to Albanese Labor at a federal level. It’s not the same thing,” he said. “I will continue to work closely with the Western Australian premier to get the right outcome for Western Australians.”