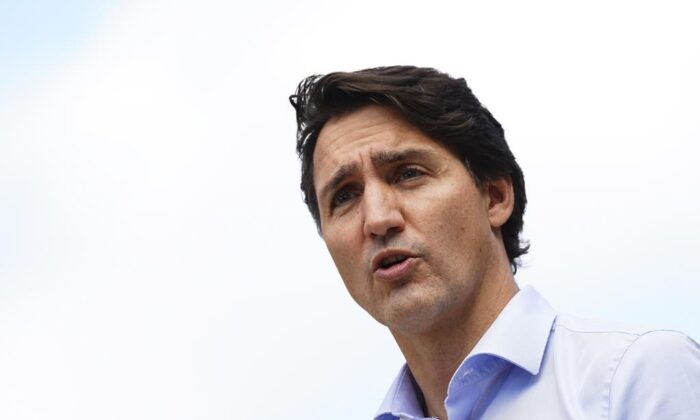 Prime Minister Justin Trudeau speaks to media as he visits a vaccine clinic in Ottawa on Tuesday, Sept. 28, 2021. (The Canadian Press/Sean Kilpatrick)
Canada

OTTAWA—Prime Minister Justin Trudeau faced backlash Friday over his decision to fly to British Columbia to spend time with his family on the first National Day for Truth and Reconciliation.

The Native Women’s Association of Canada (NWAC) said it is shocked that Trudeau “ducked out entirely” from a national day set aside to reflect on the legacy of residential schools.

Lynne Groulx, the head of the political advocacy organization for Indigenous women, said in a statement that she is astounded by the “sheer level of callousness” of Trudeau’s decision to take a trip to B.C. rather than attending events marking the historic day.

She added it showed “disregard for what the First Nations, Métis and Inuit people have endured as a result of colonization.”

The prime minister flew to Tofino, B.C., on Thursday, where Global News filmed him walking along the beach at one point, refusing to comment.

Later Thursday, Trudeau tweeted that he had spent some time that day having telephone conversations with residential school survivors from across Canada, “hearing their stories and getting their advice on the path forward.”

Alex Wellstead, a spokesman for the prime minister, said Friday that Trudeau “spoke with eight residential school survivors from across the country over several hours yesterday. It was an important opportunity to hear their stories of trauma and healing, and to hear their advice on the path forward.”

Thursday marked the inaugural National Day for Truth and Reconciliation, which was created this spring in response to one of the 94 calls to action put forward by the Truth and Reconciliation Commission that documented atrocities committed against First Nations, Métis and Inuit children in government-funded, church-run residential schools over more than a century.

The day was already known as Orange Shirt Day, in honour of the experience of Phyllis Webstad, from the Stswecem’c Xgat’tem First Nation in B.C., whose gift of clothing from her grandmother was taken away on her first day at a residential school.

Groulx said in the statement that while Trudeau was not in the public eye, millions of other people across the country wore orange shirts, spoke out on social media and took part in ceremonies, reflecting on “the dark history of Canada’s treatment of Indigenous people and what needs to be improved.”

Trudeau had participated in a ceremony on Parliament Hill on Wednesday night near the Centennial Flame, where mounds of stuffed toys and pairs of children’s shoes have been left in honour of the children who never returned from residential schools.

Judith Sayers, president of the Nuu-chah-nulth Tribal Council on Vancouver Island, which includes the Tofino area, said Friday the organization had not heard from Trudeau and had no idea he was going to be in the territory on Thursday. She said he could have joined the Nuu-chah-nulth in Tofino for some brief remarks and left.

“I understand he’s on vacation and wants some time off, but he should’ve prioritized the first National Day for Truth and Reconciliation. This is big for us and for us here. It was a really important day,” Sayers said.

“I always reflect back to how Trudeau says Indigenous Peoples are the most important relationship but he doesn’t show it. He always says good things but doesn’t follow it up with actions.”

Health Minister Patty Hajdu, who said she took part in a ceremony commemorating the day in her Thunder Bay, Ont., constituency, declined to answer questions Friday about Trudeau’s trip.

“I can’t speak to other people’s scheduling,” Hajdu said. “What I saw in my community was a commitment to reconciliation.”

“For me, it is hard to put into words how moving that day was,” she said at a press conference in Ottawa on Friday, “and how moving it was to see so many citizens out meeting with Indigenous people and hearing stories that I know for sure some have never heard before.”

Blake Desjarlais, a Métis leader and newly elected NDP MP for Edmonton Griesbach, said Trudeau’s actions increased the public perception that Thursday was “a family day” rather than a day for serious reflection about the treatment of Indigenous Peoples.

“The first day requires a precedent,” Desjarlais said. “It’s hard to imagine the future of Sept. 30 without the prime minister’s condolences, presence and messages.”

Trudeau’s daily public itinerary said at first that he was in “private meetings” in Ottawa on Thursday, though this was later changed to reflect his actual location.

One 75-year-old survivor who spoke Thursday to Trudeau “never thought in his lifetime that the would have the ear of the PM to talk about what he went through as a child,” according to his counsellor, Sharna Sugarman.

Sugarman said the man told her he was upset about media coverage focusing on the prime minister’s family trip to Tofino, rather than Truth and Reconciliation issues.

Sugarman, a Blackfoot survivor of the Sixties Scoop whose parents and grandparents went to residential schools, defended Trudeau’s decision to spend time with his children. She said he has a track record fighting for Indigenous people.

“The PM, in my opinion, has done his job, and if it weren’t for his government, (Sept. 30) wouldn’t have been marked as a day of mourning and reflection. It’s not a holiday,” she said.

“He has kept a lot of promises to my people. Is he perfect? No. No one’s perfect except a new-born baby.”

Environment Minister Jonathan Wilkinson, who was in Italy for global environment talks Thursday, said the prime minister has been clear there is no more important relationship for the government than its relationship with Indigenous Peoples.

“He has spoken with survivors across the country,” he said. “I know how much this means to him.”

Groulx said Trudeau’s decision to “flit off to Tofino for a holiday” rather than “taking the time his government set aside to reflect upon the tragedy of the Indian residential schools” gave the impression he did not take the issue seriously.

“It is almost as if he checked off one of the calls to action of the TRC (Truth and Reconciliation Commission) by declaring the statutory holiday, and then wiped his hands and said ‘job done, let’s move on,’” she added.

Frank Caputo, Conservative MP for Kamloops-Thompson-Cariboo, wrote to Trudeau on Friday to ask why he had not visited the site of the former residential school in Kamloops, B.C., where earlier this year Tk’emlups te Secwepemc First Nation said ground-penetrating radar located what are believed to be the remains of 215 Indigenous children in unmarked graves.

“Despite being in the province and only a short distance away from the former Kamloops Indian Residential School, you chose this important day to vacation,” he wrote.

With files from Nick Wells in Vancouver and Mia Rabson in Ottawa.