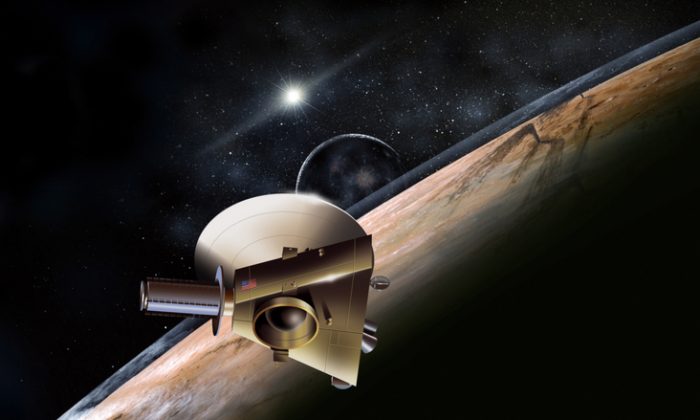 The New Horizons NASA spacecraft will be awoken in a few days after it spent nine years traveling from the Earth towards Pluto.

It’s the closest a man-made spacecraft will get to Pluto. It also marks the first time one has passed through the Kuiper belt–a grouping of bodies just beyond Neptune–of which Pluto belongs.

“This is the first look at this new zone of rocky, icy planets,” said Michael Buckley, who is a spokesperson with John Hopkins University Applied Physics Laboratory, reported ABC News. “This is what New Horizons is supposed to do.”

As of now, New Horizons is about 2.9 billion miles from Earth. It was sent into space January 2006 for Pluto, which at the time, was still considered a planet. Later, the International Astronomical Union voted to classify Pluto as a dwarf planet.

During its journey, the New Horizons spacecraft has been placed into intermittent hibernation for months at a time for a total of five years, reported Wired magazine. In this phase, the spacecraft is nearly completely shut down and maintains enough power to send a signal back home once per week.

“New Horizons is healthy and cruising quietly through deep space, nearly three billion miles from home, but its rest is nearly over,” Alice Bowman, the New Horizons mission operations manager at the Johns Hopkins University Applied Physics Laboratory, said in a release. “It’s time for New Horizons to wake up, get to work, and start making history.”

“New Horizons might have spent most of its cruise time across nearly three billion miles of space sleeping, but our team has done anything but, conducting a flawless flight past Jupiter just a year after launch, putting the spacecraft through annual workouts, plotting out each step of the Pluto flyby and even practicing the entire Pluto encounter on the spacecraft. We are ready to go,” added Mark Holdridge, the New Horizons encounter mission manager.