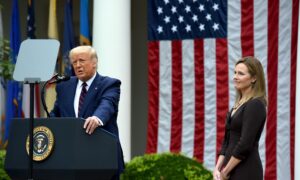 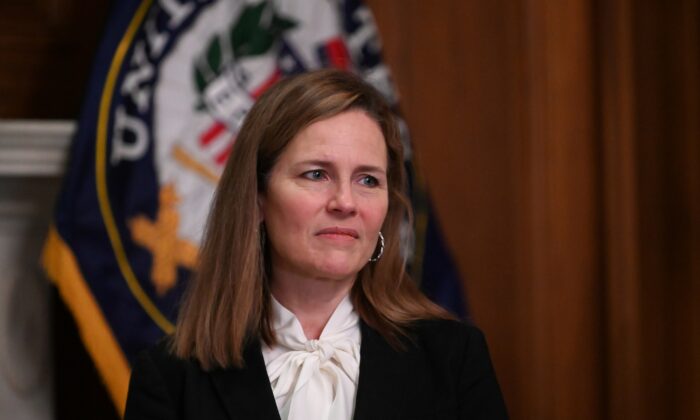 More voters support the Senate confirming President Donald Trump’s Supreme Court nominee than oppose the move, by a 15-percent margin, according to a new poll.

Forty-six percent of respondents said they think the Senate should vote to confirm Judge Amy Coney Barrett, versus 31 percent who oppose the move, according to the Morning Consult/Politico survey.

That was a nine percent increase in favor of confirming Barrett compared to a September poll from the same outfits.

The rest said they don’t know or don’t have an opinion.

Support remains high among Republicans, with 77 percent favoring confirmation, a 6 percent increase since the last poll. Support among independents grew 12 percent to 36 percent and among Democrats increased 10 percent to 24 percent.

Both polls were conducted among roughly 2,000 registered voters, with margins of error of plus/minus 2 percentage points.

Senate Judiciary Committee hearings on Barrett’s nomination are set for Oct. 12. After several days of hearings, the committee plans on advancing the nomination to the full Senate.

The Republican-held Senate plans on voting on Barrett before the Nov. 3 election.

Senate Judiciary Chairman Lindsey Graham (R-S.C.) said any senators who choose to can attend the hearings virtually, but Barrett, who recently tested negative for COVID-19, will appear in person.

Sens. Mike Lee (R-Utah) and Thom Tillis (R-N.C.) will tune in remotely because they recently tested positive for the new disease.

Because of the positive tests, Senate Majority Leader Mitch McConnell (R-Ky.) said he was postponing Senate floor activity for two weeks. But the move wouldn’t affect the Barrett hearings, he stressed.

“Since May, the Judiciary Committee has operated flawlessly through a hybrid method that has seen some senators appear physically at its hearings while other members have participated virtually,” McConnell said in a statement over the weekend.

“The committee has utilized this format successfully for many months while protecting the health and safety of all involved. Certainly, all Republican members of the committee will participate in these important hearings.”

In another, smaller survey released on Wednesday, 51 percent of voters said they think the Senate should wait until after next year’s presidential inauguration to consider Barrett’s nomination.

That included 88 percent of Democrats and 52 percent of Independents.

The YouGov/Washington Examiner survey was conducted among 1,200 registered voters, with a margin of error of plus/minus 3.6 percentage points.

A plurality of respondents also said they oppose the idea of court packing, or adding seats to the Supreme Court.

Democrats have floated the proposal if they win enough power in the upcoming elections. Democratic presidential nominee Joe Biden and his running mate, Sen. Kamala Harris (D-Calif.), have refused to say whether they support the proposal.