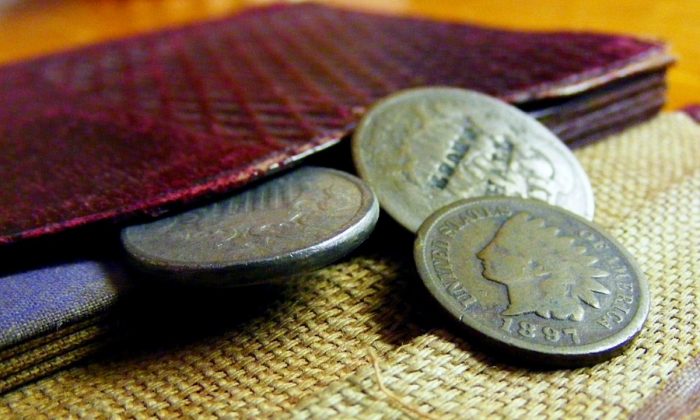 Stock image of a wallet. (jodylehigh/Pixabay)
US News

Fifteen women’s wallets that were lost 75 years ago recently fell out of a heat vent in the wall of an old school bathroom as a plumber cut through it.

They were found while the old Centralia High School in Illinois was being demolished to be turned into a new church, reported WCNC.

“He had demoed out part of the old girl’s bathroom on the second floor in this old building and when he cut into the vent, a whole bunch of old wallets fell out,” the pastor of City Hope Church, Seth Baltzell, told WCNC.

The wallets had been stuffed into the heat duct behind a toilet in one of the restrooms. The wallets had no money inside, since the thief likely pocketed any that was found. But intact were the school IDs of the owners and a lot of pictures.

“War is ending. So there are lots of things like pictures of soldiers,” Baltzell told WCNC.

The school IDs show the wallets belonged to a number of mid-1940s female students. The pastor didn’t know what to do with them, so he posted a picture of them on his Facebook page.

“Crazy Story! While demoing out the old high school in Centralia Illinois recently we found a stash of what we assumed to be stolen walets [sic] from the mid-1940s stuffed in a heat vent,” Baltzell wrote on Facebook.

To help social media users identify the owners of the wallets, the pastor gave nine names in his post.

“While someone took the cash they left behind all the pictures, information, and other documents. I’m gonna throw some names in here of what appears to be mostly women, so these are probably maiden names. If you know if they are still living or are a family member, we would love to get it back to you!” Baltzell wrote.

People responded by sharing the post thousands of times and posting a few obituaries of those deceased in the list.

A user suggested the pastor connect with the relatives of those mentioned in the obituaries. “My friend is finding these maybe you can find their kids in or around Centralia,” wrote Randall Prior.

One of the Facebook users identified one of the wallet owners as Betty June Sissom.

“Betty Sisson lived on Beacham Street along with her sisters Ruby and Faye and a brother Harold. None of those four ever married. Their dad was a cousin to my Grandpa Sisson. This would not be the Betty Sisson who lives in Salem. She was married to my Uncle Charles Sisson. Her maiden name in the forties would not have been Sisson,” said Donna Wesling.

The discussion on Sisson went on until her daughter, Cindy Sachtleben identified her on Facebook.

A plumber found 15 wallets stashed in a school bathroom wall. All were stolen from female students in the 1940s. https://t.co/LSkCKEiXnI

“Seth my mother is Betty June Sissom and that is her wallet. She is 89 and in poor health now. Is there a number she can reach you at?” wrote Sachtleben.

WCNC reported that Sisson lives in Chesterfield, and the 5 On Your Side team was able to return the wallet to her.

Sisson recalled losing the red wallet and said it’s “unbelievable” to get a lost wallet returned after seven decades. “This is exciting. I can’t believe after all of these years. It looks like its old,” Sissom told the media outlet.

Inside Sissom’s wallet was the picture of a man she was in love with at the time.

“I remember it was red and I remember I lost my wallet… I can’t believe this from all these years ago. That’s me with a little boy by the name of Jimmy Kane and I had a crush on him… Oh my goodness, look at the boy’s pictures I have… They took all the money, huh?” Sissom said.

Meanwhile, Facebook users found the story of the lost wallets extremely interesting and wished they knew who placed them inside the heat vent.

“What an amazing story! Wish they were all living and could figure out who did this,” wrote Kathy Wilson.