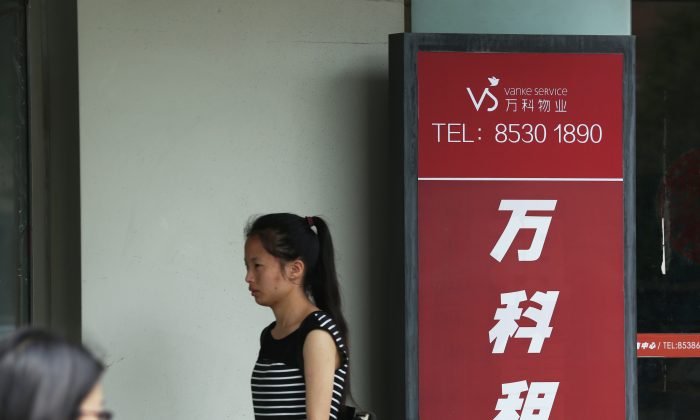 The ongoing battle for the future of China Vanke Co. Ltd., the world’s biggest residential real estate developer, took a fresh turn as conglomerate Evergrande has emerged as a third major investor in the company.

Vanke has been at the center of a year-long public battle with its No. 1 shareholder Baoneng Group, which owns around 25 percent of Vanke though numerous subsidiaries.

China Evergrande Group, a conglomerate that is part insurance company and part real estate developer—it was the No. 2 developer in China behind Vanke in 2015—said that it recently spent more than $600 million to increase its ownership stake in Vanke to 8.29 percent, according to a regulatory filing last week.

Evergrande, a powerful developer based in the southern city of Guangzhou, has been quietly accumulating Vanke shares and is now the third-biggest shareholder in Vanke behind Baoneng Group and China Resources.

While its intentions are unclear at the moment, Evergrande’s entrance brings further intrigue to the battle for control of one of China’s most visible companies.

Analysts in Hong Kong expect the company to build up its shares further. Once Evergrande’s holdings in Vanke exceed 10 percent, it will have the right to unilaterally call a shareholders’ meeting in accordance with Vanke’s bylaws.

Evergrande never disclosed the purpose of its investment. But its relatively large stake could allow Evergrande to seek board seats at the next shareholder meeting which is scheduled for March 2017. The meeting could hold the key in determining the future of Vanke, which is currently worth more than $40 billion by market capitalization.

So far, neither Evergrande nor Baoneng has demanded board representation.

CIMB Securities analyst Raymond Cheng told the South China Morning Post last week that if Evergrande can take over Vanke, it would reduce its overall leverage and provide the company with greater access to financing.

But Evergrande is unlikely to have the financial flexibility to take over Vanke. Evergrande itself is already one of the most indebted companies in China—it has accrued $57 billion in debt, almost six times its market cap, to finance corporate and land acquisitions.

Evergrande’s billionaire chairman Hui Ka Yan has led a debt-fueled buying spree over the past year. Its most recent major deal was the $555 million purchase of Shenzhen-based property developer Calxon Group in April.

The purchase should set up the Hong Kong-listed Evergrande nicely for a backdoor stock listing in mainland China. The company announced last month it is targeting a stock listing in Shenzhen by contributing all of its property assets into a newly created China-based company. A mainland listing should help the firm command a higher valuation, boosted by greater interest from Chinese retail investors.

Vanke has been at the center of a year-long high-profile control battle with its No. 1 shareholder Baoneng Group, which owns around 25 percent of Vanke though numerous subsidiaries.

In June, Vanke proposed an asset purchase from state-owned Shenzhen Metro Group for around $6.9 billion through new stock issuance to dilute Baoneng and existing shareholders’ ownership. But the issuance was rejected by Baoneng and China Resources.

The ongoing battle for control of Vanke has intrigued market participants due to an almost shocking level of confrontation in a country where private ownership of companies is still maturing and negotiations are done in an orderly manner and behind closed doors. Wang Shi, Vanke’s well-known founder and CEO, called Baoneng a “barbarian,” a reference to the book “Barbarians at the Gate” about the 1988 hostile takeover of RJR Nabisco by private equity giant Kohlberg Kravis Roberts & Co.

Baoneng, for its part, has been vocal in the past about seeking Wang’s ouster.

Stakes are also high for the Chinese Communist party in the Vanke fight. The showdown will test resolve of the Communist party to stand pat and let market forces resolve the situation, one way or another.

Wang Shi is a celebrity with a rock star-like reputation, and one of China’s first-generation entrepreneurs who is synonymous with the rise of Shenzhen as a business hub. How the Chinese regime handles a possible downfall of one of China’s most successful businessman will reveal much about its market intentions.

He founded Vanke in 1984 as a private trading company under a government agency. Four years later, Vanke became one of the first companies in Communist China history to restructure into a private holding corporation. In the following decades, Wang carefully managed his relationship with local and regional Communist party organs. Vanke largely followed party blueprints to develop and build homes and apartments across China during the real estate boom.

To avoid suspicion from the Community Party as he and the company rose to prominence, Wang held less than 0.1 percent of Vanke’s shares. Instead, the company relied on state-owned organizations as top shareholders—such as China Resources—to support Wang’s position.

But that strategy has backfired. Wang’s minimal ownership in the company he founded has left Vanke vulnerable to outside takeover.

So far, Beijing has only made cursory announcements regarding the Vanke saga. In July, China’s top securities regulator, the China Securities Regulatory Commission (CSRC) criticized both Vanke management and its shareholders. The CSRC implored the parties to find common ground, warning that any illegal actions would be punished.

CSRC has not made further comments about Vanke’s shareholder battle since.

As for Evergrande, its insurance arm Evergrande Life has attracted the attention of the China Insurance Regulatory Commission (CIRC). The regulator “explicitly expressed its unsupportive stance” regarding Evergrande Life’s tendency to use its insurance deposits to speculatively trade stocks, according to a posting on CIRC’s website.