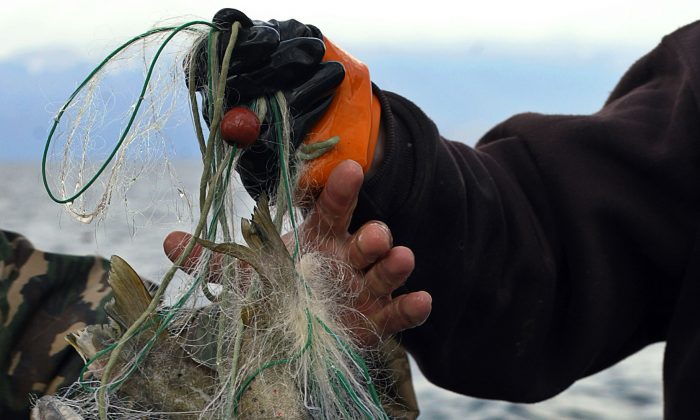 Fishermen, working for the Hydrobiological Institute in Ohrid, catch adult specimens of the famous Ohrid Lake trout, an endemic species that is highly endangered owing to overfishing. (ROBERT ATANASOVSKI/AFP/GettyImages)
International

Plenty of Fish in the Sea? Maybe Not, Says Study

The global fisheries catch has been underestimated by more than half since 1950, with tens of millions of tonnes unreported every year, said a study, warning that stocks may be running low.

About 109 million tonnes of fish were caught in 2010 – 30 per cent higher than the 77 million tonnes reported to the UN’s Food and Agriculture Organisation (FAO), according to the study.

This meant that about 32 million tonnes of catch went unreported that year, “more than the weight of the entire population of the United States”, said a research duo from the University of British Columbia, Canada.

In the peak fishing year of 1996, the FAO had documented a global catch of 86 million tonnes. In fact, it was closer to 130 million tonnes, according to the research published in Nature Communications.

“The world is withdrawing from a joint bank account of fish without knowing what has been withdrawn, or the remaining balance,” said the study’s lead author Daniel Pauly.

For the study, Pauly and his colleague Dirk Zeller compiled a “catch reconstruction”, combining FAO data with estimates of figures countries generally excluded from their official reports.

“We find that reconstructed global catches between 1950 and 2010 were 50 per cent higher than data reported to FAO suggest,” the authors wrote.

They called for more robust reporting and monitoring of catches.

“This groundbreaking study confirms that we are taking far more fish from our oceans than the official data suggests,” commented Joshua Reichert, vice president of the Pew Charitable Trusts, which supported the work.

“It’s no longer acceptable to mark down artisanal, subsistence or bycatch catch data as zero in the official record books.”

Faster decline
The team also found that the annual catch has been declining since 1996 at a much faster rate than suggested by FAO data.

And rather than the result of catch quotas, the trend may point to stocks running low, Pauly told AFP.
“When we remove countries that have catch limits … the decline persisted,” he said by email.

“The overall decline in catches is due to overfishing, and hence bad news.”

The FAO had reported the catch shrinking by about 380,000 tonnes per year from 1996 to 2010, but the reconstructed data pointed to a much stronger decline of 1.2 million tonnes per year.

The drop was mainly in large, commercial fishing – which accounted for 73 million tonnes in 2010, combined with “gradually reduced” levels of discarded bycatch – to about 10.3 million tonnes per year on average.

The team conceded that, as with data submitted to the FAO, their reconstruction “implies a certain degree of uncertainty”.

Nevertheless, “these new estimates provide countries with more accurate assessments of catch levels than we have ever had”, said Reichert.

“We are fishing harder and catching less fish,” he told AFP by telephone from Abu Dhabi.

The higher catch estimates were no surprise, said Tanzer, “but the extent to which the study indicated is worrying”.

The FAO, for its part, said there were concerns about a few “technical elements” of the study, but it agreed with the basic conclusions.

“Catch statistics … can and should be improved, and this requires additional funding and international collaboration and country commitment,” it said in a statement.