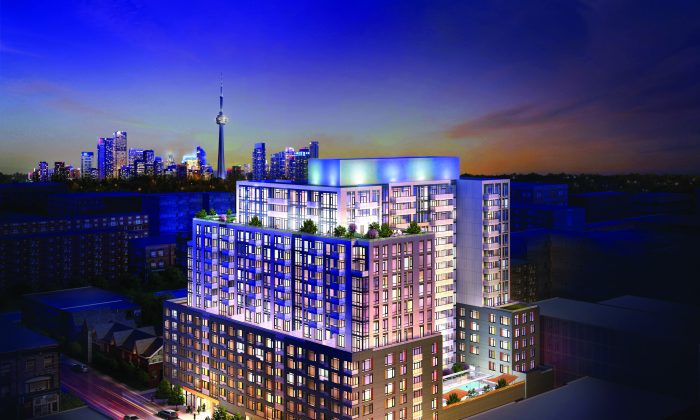 Rendering of Musee Condos, currently under construction at Adelaide St. W and Bathurst St. in Toronto and set for occupancy next summer. (Courtesy of Plaza Corp.)
Canadian Content

Plaza Corp. has forged strong ties to new Canadians through the years, recognizing the key role brokers and buyers within these affluent and real estate-hungry groups play in propelling its condo project sales.

“It’s important for our company to maintain and continue to grow and crystallize the relationships we have with various buying groups of new Canadians,” Plaza’s senior vice-president Scott McLellan tells Epoch Times in an interview at the company’s head office on Yonge St. just north of Lawrence Ave. in Toronto.

“That’s a big part of where we are as an industry, never mind just as an individual company.”

McLellan’s team works with brokers who market and sell directly to new Canadians—as well as to foreign investors—making use of their community connections here, and in mainland China, Hong Kong, South Asia, and the Middle East. In the last three years, it’s been buyers originating from mainland China and Hong Kong in particular who’ve driven Plaza’s sales programs, McLellan notes.

As such, brokers connected to those communities have gotten the VIP treatment at the launch of Plaza’s high-profile condos, including, in recent years, Exhibit on Bloor, Emerald Park Condos at Yonge and Sheppard, and King West Condos in Liberty Village. “And we’re not alone in doing that,” McLellan stresses. “We call them our rainmakers.”

They’ve helped Plaza sell more condos than most other Toronto developers for several years in a row, averaging at least 1,000 sales annually until this year, which has been focused on getting those projects built. And Asian buyers—whether they’re second-generation Canadians, new arrivals, or foreign investors looking for a safe place to park their money—have ensured Plaza has a full development slate for the forseeable future.

This includes Musee Condos, currently under construction at Adelaide St. W and Bathurst St. and set for occupancy next summer. About 75 of 440 units remain, including townhouses and three-bedroom suites. “A King West project with an Adelaide address,” is how McLellan describes it, noting that a mews system, part of a neighbouring development by RioCan REIT, will connect residents with King West.

“In 30 seconds you can be at Buca, one of the top restaurants in the city, and anything else along King,” he says. “But the front door of Musee is on the Adelaide side, where it’s way more quiet.”

Construction hoarding is now up at 1 Yorkville, and preliminary work has begun on the 58-storey shimmering tower that’s planned for the southwest corner of Yorkville Ave. and Yonge St.

Sales at the 570-unit project, developed in partnership by Bazis Inc., have been “magnificent,” McLellan says, with larger three-bedroom suites and combination units selling the most quickly.
“That tells me there’s a real market for end-user product. They’re buying a 1,200- square-foot suite because they want to live in it.”

Work also will soon begin on 50 at Wellesley Station Condos, a 38-storey tower on the north side of Wellesley St. E between Yonge and Church, where 350 of the 365 units have been snapped up.

Meanwhile, Ivory on Adelaide, a 22-storey building near Sherbourne, is taking occupancy, and just a handful of penthouses remain for sale. “There’s been pent-up demand for larger product there,” says McLellan.

Upcoming Plaza projects include The Met, a proposed 35-storey tower at Highway 7 and Jane Street, with 530 suites, 60 of them three-bedroom units, and townhouses. The project’s ideally suited for York University, which McLellan notes has seen substantial population growth but suffers from serious student housing shortages (and shortcomings).

Plaza’s also in the planning stages for 170 Spadina, a project formerly known as FAD Condos that it recently acquired and is now working on revamping. The company is proposing a redesigned building “in the neighbourhood of 16 storeys” with about 300 units, says McLellan.
And given its location, on Spadina Ave. just north of Queen St., the project should prove popular with Asian buyers, whether it’s first-timers or those living locally looking for a place to downsize into.

“The area has a real mixed bag, with lots of Chinese, Cambodian, Vietnamese, Korean—and a real need for new housing,” he says.

McLellan’s hope is that they get that need satisfied by Plaza, which has gone to great lengths to court them. “The one thing Asian purchasers do when making a buying decision is to buy from a brand leader,” he notes. “And we’ve worked hard to make Plaza a brand leader without buying million-dollar ads saying it.

“We’ve tried to prove it to them.”