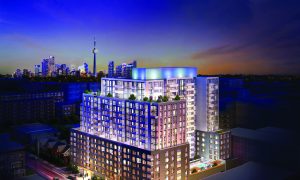 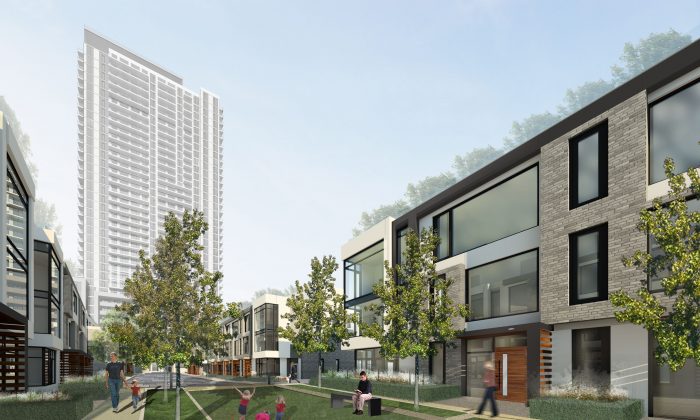 Rendering of The Met tower, with townhouses in the forefront. Plaza Corp’s project at Highway 7 and Jane in Toronto will have 531 units, including three-bedroom suites, as well as townhouses. (Courtesy of Plaza Corp.)
Canadian Content

Plaza Corp Ready to Hit the Ground Running in 2016

Plaza Corp. has been Toronto’s top-selling condo builder for the past seven years, averaging roughly 1,000 sales annually at its array of downtown condo projects during that period.

It’s been a fast and furious run, but senior vice president Scott McLellan says 2015 brought a slight change of pace for Plaza, which spent a transitional year getting those projects built and securing sites for new ones.

“We really concentrated on acquisitions, and were in the throes of obtaining what we’d consider AAA properties,” he tells Epoch Times in an interview at his company’s headquarters on Yonge St., north of Lawrence Ave. “And I’d say we were quite successful.”

Plaza acquired 170 Spadina, a pre-construction project just north of Queen Street—formerly known as FAD Condos—and has proposed a redesigned 16-storey, 300-unit building, which it plans to launch later in 2016.

Plaza picked up a site at Yonge and Maitland, across from Wellesley TTC station, complementing its other project in the area, 50 at Wellesley Station Condos, a 38-storey, 365-unit tower on the north side of Wellesley between Yonge and Church (construction begins in 2016).

Other acquisitions for Plaza in 2015 include a site at Jane and Bloor, where it plans to launch a 12-storey condo later in 2016, and a property at Widmer and Adelaide, in the heart of the Entertainment District. And in its most recent deal, at King and Peter, Plaza secured “probably the most sought-after site in the city right now,” says McLellan. “Every developer in Toronto went after it.”

Plaza has achieved its pre-sales targets for soon-to-be-iconic 1 Yorkville, with 80 percent of the 570 units purchased, and it has started construction on the 58-storey tower at the southwest corner of Yorkville and Yonge (the project is being developed in partnership with Bazis Inc.)

McLellan says 2015 also saw a late surge in sales at Plaza’s Musee Condos, which is nearing the end of construction at Adelaide and Bathurst. “We had 40 to 50 sales in the last four months of the year. Usually later sales come when all the units are finished. But all of a sudden the project caught fire again.” (Musee has been especially popular with Mainland Chinese-New Canadian buyers, he says, noting they represent 20 percent of its market.)

Plaza plans to hit the ground running in 2016 with The Met, a 35-storey tower at Highway 7 and Jane that’ll have 531 units, including three-bedroom suites up to 1,200 square feet, as well as townhouses.

The project—with a party room, 24-hour concierge, and parking spots included in the purchase price—launches in February, and will be a big boon for York University, whose population is vastly under-served when it comes to accommodation options. The Met is also generating interest from young families who can’t afford detached homes, and down-sizing local empty nesters who want to remain in Vaughan. “We’re getting inquires from both demographics,” McLellan says.

And with two new TTC stations coming to the area as part of the subway line expansion, plus a major university in close proximity and a downtown sprouting up where none existed before (Vaughan Metropolitan Centre), The Met boasts everything investors seek in a downtown condo project that caters to University of Toronto or Ryerson University, “but for $100 per square foot cheaper.”

Despite venturing up to Vaughan, the bulk of Plaza’s work remains concentrated on developing downtown sites. But McLellan acknowledges finding good opportunities in the city is “becoming more and more difficult.”

“It’s a big challenge for builders to figure out how, when, and where to buy land,” he says, noting that there were probably 15 bidders on the most recent site Plaza acquired at King and Peter, “and it was all of the city’s big players, which tells you there’s a shortage.”

Asked to look into his crystal ball for 2016, McLellan points to a recent report which predicts Toronto condo prices could rise by as much as 40 percent in coming years, primarily due to limited land availability. “Supply and demand is definitely going to be driving up numbers,” he says.

A 40 percent spike may seem steep, but McLellan recalls Plaza’s Liberty Village condos were priced at $440 per square foot five years ago, and now they’re selling for $560—almost a 30 percent uptick. “So will Toronto eventually see $1,000 per square foot? I think there’s a good chance it will.”