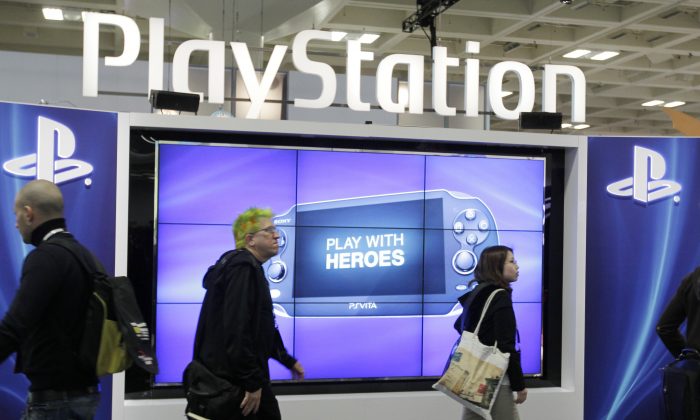 Lizard Squad and Finest Squad have apparently been doing battle over PlayStation Network and Xbox Live. This March 8, 2012 file photo shows attendees walking past the Sony PlayStation PS Vita console on display in the Sony PlayStation booth at the Game Developers Conference in San Francisco. Despite a refreshed focus on real-world issues at the 2014 GDC convention that kicks-off Monday, March 17, 2014, the ever-changing virtual world and how to view and interact with it will take center stage at GDC. PlayStation 4 creator Sony Corp. is expected to tease its rendition of virtual reality technology during a Tuesday presentation called "Driving the Future of Innovation at Sony Computer Entertainment." (AP Photo/Paul Sakuma, file)
Gaming

Sony is offering up a $15 million settlement to gamers after the PlayStation Network was hacked three years ago, but according to recent reports, the company refuses to admit fault in the case.

According to Gamespot, the lawsuit was settled with the group that sued Sony. It will provide credit and several games to PlayStation users.

“While we continue to deny the allegations in the class action lawsuits, most of which had been previously dismissed by the trial court, we decided to move forward with a settlement to avoid the costs associated with lengthy litigation,” a Sony spokesperson told Gamespot.

The statement adds: “To date, the Sony entities have received no confirmed reports of identity theft linked to the attacks, and there is no evidence that anyone’s credit card information was accessed. We are glad that the parties are working toward a resolution of this matter and that our gamers will continue to enjoy our entertainment services.”

The PlayStation Network was taken down for about three weeks after hackers breached it. Sony maintains that no credit card information was stolen.

“A proposed settlement has been reached in the class action lawsuits arising from the April 2011 criminal cyber-attacks on the PlayStation Network, Qriocity, and Sony Online Entertainment services. Information regarding the proposed settlement, which is subject to final approval by the Court, is available in the settlement agreement and other documents filed with the Court,” the statement adds, according to Kotaku.

“While we continue to deny the allegations in the class action lawsuits, most of which had been previously dismissed by the trial court, we decided to move forward with a settlement to avoid the costs associated with lengthy litigation.”