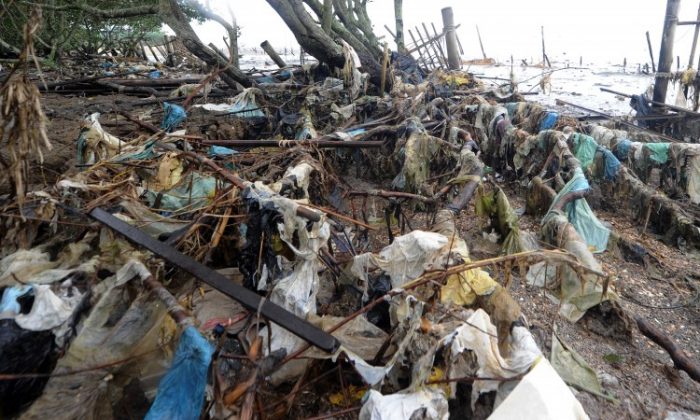 Plastic debris entangling the roots of a mangrove tree at Maua beach in 2012 in Rio de Janeiro, Brazil. The human and industrial pollution have impacted fishing in the bay. Students at a private school are arguing New York City should do its part to limit plastic bag debris. (Antonio Scorza/AFP/GettyImages)
US

NEW YORK—A group of students at a private school on the Upper East Side have started a petition and are convening a forum with experts, trying to get the city to ban plastic bags.

A “Ban the Bag Conference” is slated for March 2, where students at the Hewitt School’s Earth Committee will meet with experts who have been involved with plastic bag bans in other major cities, such as Jennie Romer, who helped ban plastic bags in San Francisco.

Ron Gonen, Mayor Michael Bloomberg’s first deputy commissioner for recycling and sustainability, will also be at the conference. Gonen and the mayor are currently working on a Styrofoam ban.

“Right now we can set a good example and make a difference by refusing plastic bags from stores and shopping with reusable bags,” the school states on the conference website.

Students told DNAinfo they were inspired to push for the ban after learning that, unlike some other major U.S. cities, New York hasn’t banned or put a tax on plastic bags.

“We’ve been working hard for a long time,” said Jocelyn Goldberg, a 17-year-old senior. “The idea in itself is empowering because we’re trying to get a petition.”

The petition, which has 1,616 signatures so far, is directed at the City Council.

While plastic bag debris—well publicized as ending up in oceans and entangling wildlife—is a nationwide and worldwide problem, there is something New Yorkers can do, says the petition.

By banning the bag, New York City can send a powerful signal that this great city can be an environmental leader.”

City Council did pass a law in late 2007 to require retail or wholesale stores either larger than 5,000 square feet or part of a chain of at least five to start a plastic bag and film plastic recycling program, including having the words “please reuse or recycle at a participating store” printed on bags.

Because plastic bags and film plastic don’t biodegrade, they ultimately break down into smaller pieces. “These pieces of plastic cause illness, injury and death to animal and marine life by entangling them or contaminating their food supplies,” states the bill. “The production of plastic bags and film plastic worldwide uses over 12 million barrels of oil per year, which causes significant environmental impacts.”

Mayor Michael Bloomberg’s initiatives—such as the recently enacted soft drink ban, or a ban on smoking in public places such as beaches and parks—have generally taken public health into account more than pure environmental impact, though his recently announced Styrofoam ban is more of an environmental issue.

City Council Speaker Christine Quinn’s office did not return requests for comment on her position regarding a plastic bag ban, or whether any councilmembers have discussed any legislation banning or otherwise limiting plastic bags.

If the city doesn’t ban plastic bags, say the students, officials should impose a fee on them, also an increasingly common practice in cities nationwide.