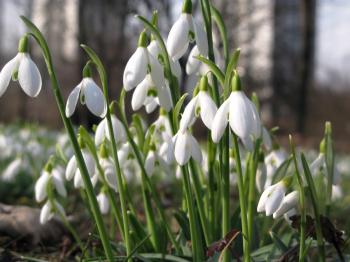 When sibling plants grow next to each other, their leaves often touch and intertwine, but stranger plants grow rigidly upright and avoid touching each other. (sxc.hu)
Science

Rakefet Tavor
View profile
Follow
biggersmaller
Print
It is not fiction that sibling plants—plants grown from seeds of the same plant—can recognize each other and treat each other better than nonrelated plants, or strangers. This phenomenon of kin recognition in plants has been shown in scientific studies.

In her research from 2007, Dr. Susan Dudley, of McMaster University in Canada, demonstrated the competitiveness among plants. According to her findings (available at http://rsbl.royalsocietypublishing.org/content/3/4/435.full), when plants are forced to share the same pot with other plants from the same species, they get fiercely competitive and increase their root growth. However, when the neighboring plant is a sibling—that is, a plant from the same mother plant—they don't get competitive.

In another study published in the American Journal of Botany, Dudley and Dr. Guillermo Murphy, also of McMaster University, found that when neighboring plants are relatives, Impatiens pallida tends to increase stem elongation and branching so it can achieve more light without shading nearby relatives. But when the neighbors are strangers, it tends to move more resources from its roots to the leaves and produce enlarged leaves so it can enjoy the limited light and at the same time negatively affect the neighboring plants by shading them.

A study by researchers at University of Delaware found that strangers planted next to each other often grow shorter because so much of their energy is directed at root growth. On the other hand, sibling plants do not compete against each other, and their roots are often much shallower. In addition, when sibling plants grow next to each other, their leaves often touch and intertwine, but stranger plants grow rigidly upright and avoid touching each other.

“It’s possible that when kin are grown together, they may balance their nutrient uptake and not be greedy,” said Dr. Harsh Bais, lead author of the study, in a press release. The researchers suggested that kin recognition is possible by chemical cues secreted by the roots.

In June 2009, Dr. Richard Karban of the University of California at Davis published his study indicating that sagebrush plants not only recognize their “clones”—genetically identical cuttings planted nearby—they can even communicate danger to them.

When sagebrush plants get damaged by herbivores, they emit volatile cues that warn their own kind of the impending danger. Genetically identical cuttings within 60 centimeters (23.6 inches) of an experimentally clipped neighbor in the field, following exposure to those secreted chemicals, made themselves less profitable for herbivores to eat.