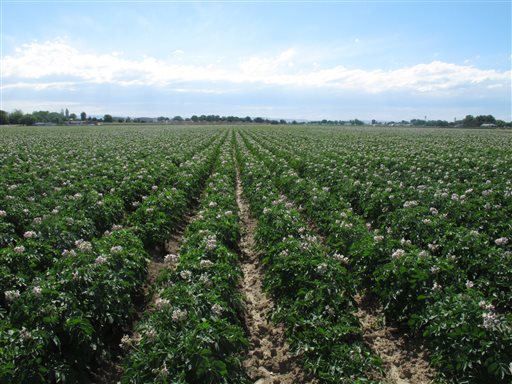 A field of flowering Ranger russet potato plants is pictured near Wilder, Idaho, on Wednesday, June 12, 2013. In a lawsuit moved to Idaho federal court this week, a U.S. wholesale grocery cooperative has sued the United Potato Growers of America, alleging the group's members in 15 states are illegally fixing prices and driving up costs. (AP Photo/John Miller)
Beyond Science

Plants do math? A study has found that plants “do math” to ensure they have enough food to get through the night.

Britain’s John Innes Centre found that plants make adjustments to how much starch they consume to prevent starvation at night when there is no energy coming from the sun during the day, reported Reuters.

“This is the first concrete example in a fundamental biological process of such a sophisticated arithmetic calculation,” mathematical modeler Martin Howard with the Centre told the news agency.

It found that mechanisms in the leaf measure the plant’s starch store to estimate how much they need to use until dawn arrives.

“The calculations are precise so that plants prevent starvation but also make the most efficient use of their food,” study co- author Alison Smith said in press release obtained by Discovery News. “If the starch store is used too fast, plants will starve and stop growing during the night. If the store is used too slowly, some of it will be wasted.”

Information about the amount of sunlight comes from the plant’s internal clock, which Reuters pointed out is similar to the human body’s biological clock.