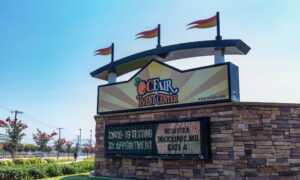 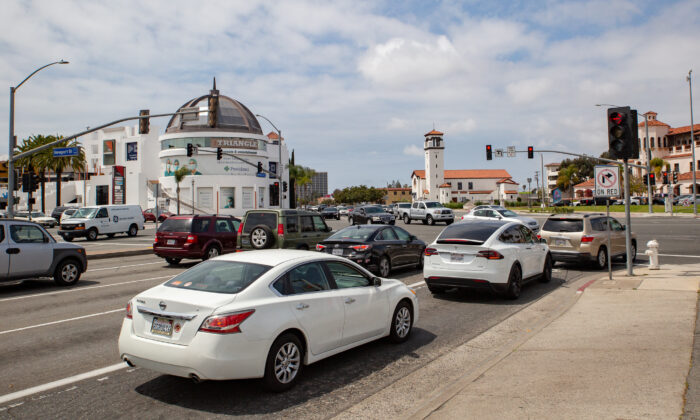 Planning commissioners in Costa Mesa, California, have rejected a proposal to install digital billboards at a shopping center near one of the city’s busiest intersections.

The six commissioners voted unanimously to deny city staff recommendations that favored the billboards over Triangle Square shopping center, after listening for hours to input from dozens of business owners and residents.

“I’m extremely glad our planning commissioners were listening to the residents,” Abraham told The Epoch Times. “We are not LA. We are not like this trendy downtown, you know. We’re not Manhattan and we’re not Las Vegas. … That’s not who we are.”

“These signs are absolutely necessary for the center to succeed,” Mateen told the commissioners on April 12. He said occupancy rates at the mall could fall below 70 percent as a result of the COVID-19 pandemic, and the signs would attract new businesses.

“Since the last public hearing and the resulting buzz that has been created, we have had seven inquiries to sign leases at the center. And if the digital signage plan is approved, they’ll be signing leases,” he said.

Residents argued that the signs would distract drivers and make already dangerous intersections near the mall even more perilous.

Before voting against the proposal, Commissioner Jon Zich said it “should be intuitively obvious” that adding digital billboards would only further distract drivers at intersections such as 19th Street and Harbor Boulevard.

‘A Graveyard for Businesses’

Several of the mall’s prospective occupants called in to the April 12 virtual public hearing and wrote letters to support Mateen’s claims that they are interested in signing leases at Triangle Square.

Shaan Mehta said he is currently working with Mateen to bring a salon to Triangle Square, and believes in his vision to improve the shopping center and draw more business with the digital signage.

“That center is located in the heart of Costa Mesa in the heart of Orange County … and there’s no reason why businesses can’t thrive there, except that they can’t get the word out,” said Mehta. But without the signage, “there’s no money to put into the center to actually upkeep it. It is in a state of disrepair.”

Even though he is a Costa Mesa resident, Mehta, who owns ASPIRE Salon Studios, hadn’t considered Triangle Square as a location because of its reputation.

“It is a graveyard for businesses, and it has been that way for a while,” he said. But, since talking to Mateen about his plans to revamp the center, Mehta said he’s changed his mind and wants to set up shop at Triangle Square.

“I understand people are really worried about safety, but it’s not like we’re putting the signage, you know, right in front of people’s houses. It’s a busy commercial intersection, and that center is there for commerce, and the businesses that are there are struggling,” he said.

Triangle Square had scaled down the scope of its original proposal, agreeing to slow the frequency of ads to 20-second intervals and reduce the size and brightness of the signs. The center also agreed to turn off the signs from midnight until sunrise Sunday through Wednesday, and from 2 a.m. till sunrise Thursday through Saturday.

Mateen also committed to reinvesting 50 percent of the billboards’ revenue to improving the image of the shopping center, which he said would bring in new tenants and create jobs.

The proposal will go to City Council before a final decision is made. The billboards would generate a guaranteed $150,000 annually, along with 10 percent of any ad revenue over $1 million every year, less expenses. A date has not yet been set for the council vote.

Despite assurances from experts and consultants that drivers would notice the signs but not be distracted by them, many residents disagreed.

City Transportation Services Manager Jennifer Rosales cited a high number of accidents near the mall. She reported that from 2016 to 2020, on Newport Boulevard from 19th Street to 18th Street—where the mall is located—there had been a total of 134 accidents: 70 with injuries, 32 involving drunk drivers, and nine involving pedestrians.

During those years, the intersection of Newport Boulevard and 19th Street had 60 crashes, the highest number in Costa Mesa, according to Rosales—along with the highest traffic volume in the city.

At the meeting, Costa Mesa resident Flo Martin said she was almost run over by a distracted driver while wearing a high-visibility vest and participating in a walk audit at one of the intersections.

Martin disputed the figures Rosales reported, stating they were “very cleaned up.” She said that 162 pedestrians were victims of traffic accidents on that stretch between 2014 and 2018, including nine fatalities and 21 severe injuries, though her figures were unsubstantiated. There were also 238 collisions with bicyclists, she said, including one fatality and 10 suspected serious injuries.

“These are human beings,” Martin said. “Planning commissioners, you do not represent out-of-town developers and out-of-town [business] owners. You represent your constituents, like me.”

“These signs are a gross violation of the character of the surrounding neighborhoods,” he said. “These LED digital signs will result in visual blight, light pollution, safety issues due to distracted drivers, and a cheapening of the city’s brand and sense of place.”

GCMR’s Abraham and co-founder Ben Chapman, who both ran unsuccessfully for seats on the City Council last fall, opposed the signage.

Abraham said she lives near Triangle Square and had promised residents she would “fight tooth and nail” against the signage, whether she was elected or not. “I just hope the City Council does the right thing, too,” she said.

Chapman said that businesses that must rely on digital signs for financial success should revisit “Marketing 101” and rethink their marketing strategies.