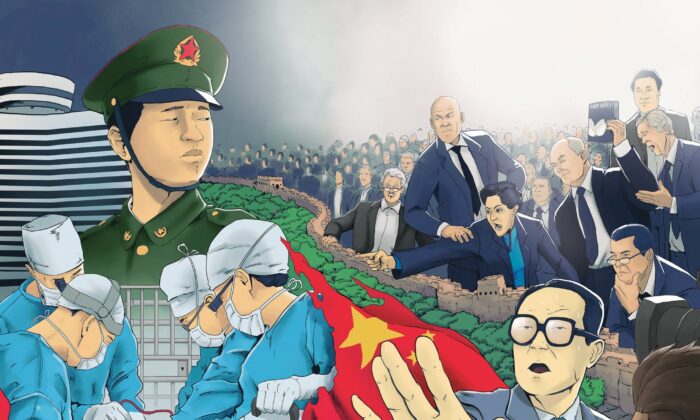 A poster for the comic book Davids and Goliath. (Courtesy of Milan Kajínek)
Organ Harvesting in China

The Chinese regime’s practice of killing prisoners of conscience for their organs to sell on the transplant market has been the subject of media articles, books, and documentaries.

Now Czech activists have their sights on creating a comic book to raise awareness about the grisly practice.

The historical fiction story, created by Milan Kajínek, takes place in China in 2006. According to the project’s website, the comic follows a girl who goes to China for an organ transplant, where she stumbles upon a horrifying truth: That the organs for transplant are harvested from people in a detention camp next to the hospital.

Kajínek, project coordinator, said they chose the graphic novel format because of its universal appeal.

“It is also a medium that is dignified enough to tell important, real stories. That’s why we decided for it in the end,” he states on the website. Kajínek, who is also the chief-editor of the Czech edition of The Epoch Times, is working on the project in his personal capacity.

The script and early drawings for the comic have been completed. The project is currently seeking funding on its own website.

“With this comic, we want to add fuel to the fire of resistance and draw attention to crimes that cannot be tolerated: The abuse of life-saving science and the rise of the Communist Party’s totalitarian power in China,” the website states.

The comic’s name “Davids and Goliath” comes from a 2014 documentary film of the same name. The film followed the investigation into the forced organ harvesting conducted by former Canadian Secretary of State (Asia-Pacific) David Kilgour and Canadian human rights lawyer David Matas.

Kilgour and Matas were among the first investigators probing the issue since allegations that the Chinese regime was harvesting organs from Falun Gong practitioners first emerged around 2006. They’ve co-authored several reports finding that imprisoned practitioners were being used as unwilling sources for organs on the transplant market.

In 2019, an independent people’s tribunal, after a year-long investigation, concluded beyond a reasonable doubt that the Chinese regime has for years been forcibly harvesting organs from prisoners of conscience on a “substantial scale,” with the main source being Falun Gong practitioners. It also found that the practice continues today.

In reaching this conclusion, the tribunal highlighted various pieces of evidence, including the following: extremely short wait-times for organ transplants advertised by Chinese hospitals; analysis of hospital infrastructure which showed that the regime was performing up to 90,000 transplants a year, vastly more than the official figure of 10,000 transplants; and testimony from Falun Gong practitioners who say they were given blood tests and other medical tests consistent with testing for organ health while incarcerated, while non-Falun Gong prisoners were not tested.

The Chinese regime, which denies the practice, has claimed that from 2015 organ transplants have come only from voluntary donors.

Last week, at an online conference on organ harvesting convened by over 100 nonprofits from around the world, the organizers said: “For the victims, which include political prisoners, Falun Gong practitioners, and Uyghurs, it is not just the harvesting of their organs, it is also a harvesting of their life.

The article has been updated to include the latest crowdfunding site.