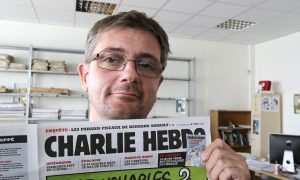 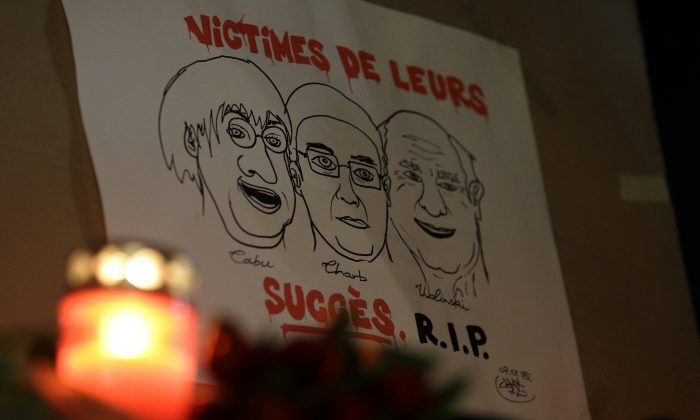 A drawing depicting cartoonist Jean Cabut (L), Charlie Hebdo editor Stephane Charbonnier (C), and cartoonist Georges Wolinski, all three of whom were killed when masked gunmen stormed the Paris offices of a weekly newspaper Charlie Hebdo and reading in French, "Victims of their success, R.I.P", is placed outside the French Embassy as people gather to express solidarity with victims of the attack in Berlin, Germany, Wednesday, Jan. 7, 2015. Three masked gunmen shouting “Allahu akbar!” stormed the Paris offices of a satirical newspaper Wednesday, killing 12 people, including its editor, before escaping in a car. It was France's deadliest postwar terrorist attack. (AP Photo/Michael Sohn)
Europe

PARIS (AP) — Two heavily armed men in black, their faces hidden by ski masks, take down a police officer on a Paris sidewalk with a spray of bullets. One walks up to the victim, who is sprawled on the ground, and delivers a final shot to the officer’s head despite the arm raised in a final plea for mercy.

The methodical, cold-blooded killing before noon Wednesday marked the end of a massacre only minutes earlier in the offices of the satirical French weekly Charlie Hebdo that killed 12 people, including noted cartoonists and the well-known newspaper editor and cartoonist Stephane Charbonnier, widely known as Charb. Eleven other people were wounded in the terror attack, four of them in critical condition, according to state prosecutor Francois Molins.

The two men had opened fire twice on police patrols, one on bicycles, since the massacre minutes earlier, but injured no one. Then they ran into the doomed officer. After the point blank-range slaying, they calmly walked to their getaway car.

The killers were heard crying “Allahu akbar!” — Arabic for “God is great!” — and saying they were avenging the Prophet of Islam after they attacked the weekly publication during an editorial meeting, a video shows. But no one has claimed responsibility.

The professional military bearing of the attackers and reports that they spoke fluent French raised a host of questions. Were they hired guns acting on orders from some terror group? Or perhaps battle-hardened French jihadis returning from Syria to fulfill France’s greatest fear?

France raised its terror alert to maximum and President Francois Hollande vowed to “hunt them as long as necessary.”

In a display of professional nonchalance, the two, bearing what looked like assault rifles, were caught in a chilling video that showed them almost casually walking to a black Citroen parked between rental vehicles on the French capital’s busy Boulevard Richard Lenoir. Before slipping into the passenger seat, one bent down and retrieved a fallen object, tossing it inside.

They drove away and, in a slip, hit another car as they headed to northern Paris, injuring that unsuspecting female driver, who reported seeing three of them, prosecutor Molins said. In a massive manhunt, French police used eyewitness accounts to trace the movements of the killers, who later abandoned their vehicle and car-jacked a Renault Clio in the city’s northern 19th arrondissement, escaping once again. Molins said the Clio has not been found.

Corinne Rey, an artist who spoke by phone with the French newspaper L’Humanite just after the attack, identified herself as the person who was forced to open the door of the building where Charlie Hebdo has its offices. She said she punched in the correct security code after she and her young daughter were “brutally threatened” by the masked gunmen.

“They fired at Wolinski, Cabu .,” Rey said of the assault on the newspaper, naming two well-known French cartoonists. “It lasted five minutes. I hid under a desk.”

She said they spoke French fluently and claimed they were from al-Qaeda.

Police union spokesman Christophe Crepin said the gunmen knew exactly whom they wanted to target at the newspaper.

They “went straight for Charb and his police bodyguard, killing both immediately with automatic weapons, then firing on others,” he said.

One witness to the point-blank slaying of the police officer said the attackers’ machine-like precision reflected what could only be prior experience with killing.

“I think they were extremely well trained and they knew exactly down to the centimeter and even to the second what they had to do,” said the man, who lived across the street from where the police officer was killed. He asked The Associated Press not to publish his name for fear the killers could come back hunting for him.

From The Associated Press. Sam Petrequin and John Leicester in Paris contributed to this report.