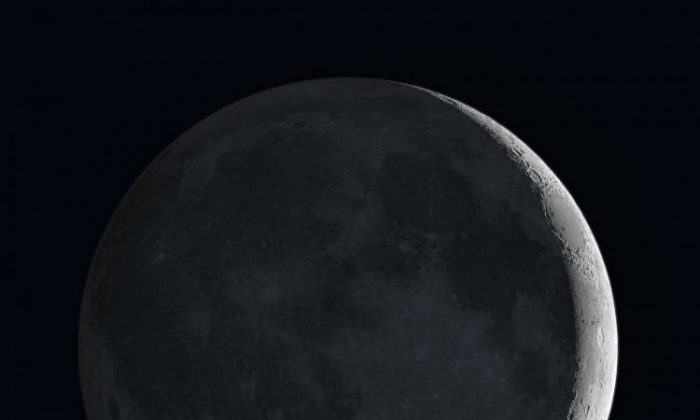 When the moon appears as a thin crescent, the rest of the disk may also faintly glow due to sunlight reflecting off the Earth and illuminating the lunar surface. (ESO/NASA/M. Kornmesser)
Science

A new method for finding life on other planets has been developed by measuring the reflection of Earth’s light onto our moon using the European Southern Observatory’s (ESO) Very Large Telescope (VLT).

“We used a trick called earthshine observation to look at the Earth as if it were an exoplanet,” said study lead author Michael Sterzik at ESO in a press release. “The sun shines on the Earth and this light is reflected back to the surface of the moon.”

“The lunar surface acts as a giant mirror and reflects the Earth’s light back to us—and this is what we have observed with the VLT.”

By studying the Earth’s reflected glow, the scientists detected various biosignatures—information that points to the presence of organic life, such as specific combinations of atmospheric gases. Thus Earth can now be used as a baseline in the hunt for life on planets outside our solar system.

As well as observing earthshine’s brightness in different colors, the astronomers also used spectropolarimetry to measure its polarization. This enhances the biosignatures by canceling out the light coming directly from our sun.

“The light from a distant exoplanet is overwhelmed by the glare of the host star, so it’s very difficult to analyze—a bit like trying to study a grain of dust beside a powerful light bulb,” said study co-author Stefano Bagnulo at Northern Ireland’s Armagh Observatory in the release.

“But the light reflected by a planet is polarized, while the light from the host star is not,” he continued. “So polarimetric techniques help us to pick out the faint reflected light of an exoplanet from the dazzling starlight.”

With this approach, the team determined that Earth has vegetation and oceans on its surface with a partly cloudy atmosphere. It even revealed variations in vegetation and cloud cover as Earth’s different regions reflected light at the moon.

“Spectropolarimetry may ultimately tell us if simple plant life—based on photosynthetic processes—has emerged elsewhere in the universe,” Sterzik said. “But we are certainly not looking for little green men or evidence of intelligent life.”

The paper will be published in Nature on March 1.