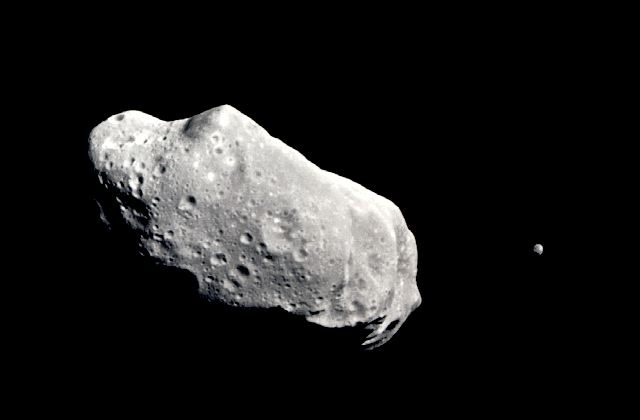 The asteroid Ida and its moon, Dactyl. (NASA)
Science

Planetary Resources, a Seattle-based space startup company, said on Tuesday that it is planning to capture water and precious metals from asteroids near the Earth.

“Water is perhaps the most valuable resource in space. Accessing a water-rich asteroid will greatly enable the large-scale exploration of the solar system,” Eric Anderson, the co-founder of Planetary Resources, said in a statement.

The firm plans on sending an exploratory vessel into outer space within 2 years and will extract minerals from the asteroids several years after that.

Mining asteroids, the company said, will benefit humanity by sustaining a supply of rare minerals, including platinum.

“Many of the scarce metals and minerals on Earth are in near-infinite quantities in space,” said Peter H. Diamandis, the company’s other co-founder, in a statement.

More access to the minerals, he added, will lessen “the cost of everything from microelectronics to energy storage” and will provide “new applications for these abundant elements.”

For example, the company claims, a single 500-meter (1,640-foot) asteroid rich in platinum “contains the equivalent of all the” platinum that has been mined in history.

“Our mission is not only to expand the world’s resource base, but we want to increase people’s access to, and understanding of, our planet and solar system by developing capable and cost-efficient systems,” Chris Lewicki, the company’s chief engineer, said in the statement.

Other than mining, the company said it hopes to build a refueling station in space. “Accessing water resources in space will revolutionize exploration and make space travel dramatically more economical,” the company said.

Water, along with its life-giving properties, can also aid in the manufacturing of rocket fuel, essentially making the asteroids a “stepping stone” to further exploration, the company claims.