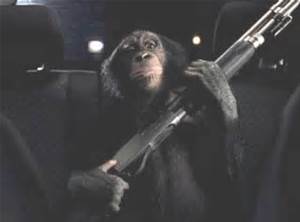 Human or simian, the killer instinct still drives us...
News

Planet of the Killer Apes

We humans think of ourselves as a highly evolved species. We point to our cities and tools and social constructs as evidence of our superior status among the creatures that share this planet. We assume we are smarter than our ancestors, because every generation believes itself to be wiser than the generation before.

We’re wrong about that. Evolution takes more time than our minds can actually grasp, and we haven’t evolved noticeably within recorded human history. The average person today isn’t much different from the people who built the earliest megalithic structures on Earth more than ten thousand years ago.

When you strip away the artifacts and constructs of humanity and look at how we behave, we’re not much different from the killer apes that Darwin believed were our evolutionary ancestors, our genetic cousins. As individuals, humans and apes are driven by the same basic desires; as a tribe, both are subject to the same tendency towards violence and fanaticism that arises from a collective greed.

We may be the dominant killer apes living on the planet, but Mother Earth herself seems a bit irritated with our recent behavior. Humans must feel a bit like a virus to her, and she’s activating her natural defenses as she has done so many times before. The earth may require a cleansing period to deal with mess humanity has created, but the planet itself will survive the worst kind of devastation we can bring to bear.

We may wipe out our own species before Nature takes that step. You don’t need to look far into the future before you see ugly things, the kind you hope never come to pass. Humanity has gone through periods of indescribable deprivation in the past and survived, but never has there been so many of us sprawled across so much of the land.

We have one saving grace that sets us apart from the killer apes with whom we share so much. We have the ability to transcend our circumstances, to envision an unlikely result and bring it into existence. We can – and on a few rare occasions we have – come together as a tribe and chosen coexistence over competition, chosen survival through cooperation over survival of the strongest.

We need that kind of political movement today as much as ever before. We’re regressing back to our killer ape instincts in order to deal with the pressure of so many people overloading the systems we’ve constructed. Those with power are grabbing as much as they can hold; others are storing goods away in case Hard Times come tomorrow. Everyone is feeling the natural anxiety animals feel when they sense that their food and habitat are in danger.

Our political systems feed off the anxiety of the citizenry. Our news sources profit by promoting a crisis mentality, broadcasting calls for war while ignoring voices who call for peace. That’s been mostly true for two centuries; more so during some eras than others. We’re in one of those peak propaganda eras right now, a dismal time when politics and media feed off the manufactured fears of the public.

This shall pass after a natural course of time, perhaps in another decade or two. It could all be changed in a matter of months if Americans really wanted it, but most folks today aren’t as adventurous as those Founding Fathers they hold in such high regard. It will change when enough of the people have had enough.

A tipping point seems to have been reached in 2014, and the pendulum may  swing once more towards a place where ethical and cooperative behavior by a human is valued more than the aggression of a warrior ape. We have an opportunity to evolve our methods of informing the public and evolve the way we govern ourselves. We need to buy ourselves some time to evolve beyond the limitations of our killer ape ancestry.

That won’t be easy, and it might take a very long time. But enough folks have had enough with the old ways to make changes possible, to stop the pendulum and start moving forward. The question is, are we human enough?