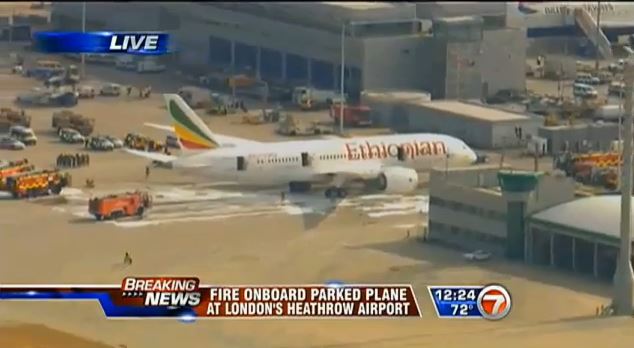 The Ethiopian Airlines plane that was on fire on July 12, 2013, at London's Heathrow Airport. (Screenshot/YouTube)
UK

The aircraft was at the gate and unoccupied. Runways are beginning to re-open as of 12:53 EDT, according to Heathrow Airport. “Pls check your flight status before travelling to the airport,” it tweeted. “Please expect delays to arrivals and departures.”

A spokesperson with the airport told Sky News that there was an internal fire from the plane, and video footage shows at least nine fire engines responding.

Boeing tweeted that it is aware of the event and that they have personnel there. “We’re working to fully understand and address this,” it tweeted.

Boeing shares were down five percent in New York, according to Sky News.

The plane is a Dreamliner of the Ethiopian Airlines.