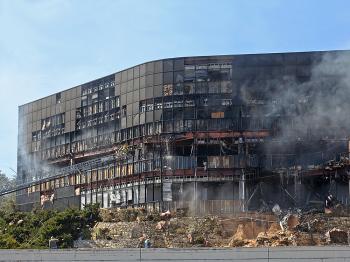 Smoke billows from a building that houses IRS offices after a small plane crashed into it February 18, 2010 in Austin, Texas. (Jana Birchum/Getty Images)
US

Eyewitness reports indicate that the pilot flew his Cherokee 140 over a neighboring apartment complex and rammed the office building at full speed.

The building he hit contains an IRS office, and a neighboring building contains an FBI office. There is some speculation that this was his intended target.

An NTSB report indicates that the pilot set his house on fire before taking off.

Initial reports are that the pilot might be Joseph Andrew Stack, a software engineer. Apparently he set his home on fire after a domestic dispute. His wife Cheryl and his daughter were rescued from the burning home. The pilot might have stolen the plane from Georgetown airport.

“It was swooping down like it was going to buzz the apartments and then pull back up.” said an eyewitness to a KXAN reporter. “As soon as he cleared the apartments he just dropped down and we saw this ball of flame as tall or taller as the whole apartment complex itself.”

The eyewitness said the plane “was within feet of the top of the apartment complex.”

Another eyewitness said the plane crashed into the building under full power.

Initial reports are that one person in the building is missing and two have been hospitalized.