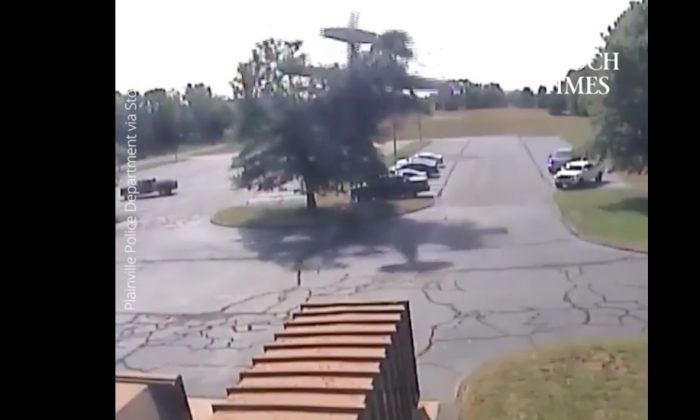 A small plane crashed in a parking lot in Plainville, Connecticut, Sept. 11, 2017.(Plainville Police Department via Storyful)
US

A small plane crashed in to a parking lot in Plainville, Connecticut on Sept. 11. Pilot Manfred Forst, 80, escaped the incident with only minor injuries, no doubt thanks to a tree that took the brunt of the fall.

The Hartford Courant reported the single-engine Cessna was coming into land at Robertson Field Airport when it veered and crashed into a parking lot at Carling Technologies, situated behind the airport. The incident took place at around 11:30 a.m.

Frost was the only person on board.

A CCTV camera captured footage of the crash.

“I was very fortunate I got out of it without any real injuries,” said Forst. “I’m just so thankful.”

The German-born pilot told the news outlet that he gave his wife a big kiss when he got home.

The Federal Aviation Administration is investigating the cause of the crash. The initial incident report identified the aircraft as a 1981 Cessna 172.

Cessna 172s are known for their safety record. Richard Collins, Editor Emeritus for Air Facts journal did a deep dive into accident statistics and found that the Cessna 172 has a fatal accident rate of just .56 per 100,000 flying hours, which is the lowest accident rate in private aviation. The aircraft is also the most built in history with over 43,000 units produced.

The data reveals as well that 172s are involved in a similar number of forced landings as other planes—landings similar to Frost’s—leading Collins to conclude that the model seems to be “more adaptable to impromptu arrivals than some other airplanes.”

Below is a video from NASA designed to simulate a Cessna 172 involved a serious crash. In the video, taken in July 2015, NASA drops a 172 from 100 feet in the air at the Langley Landing and Impact Research Facility. NASA was researching next-gen search and rescue technology in partnership with the National Oceanic and Atmospheric Administration, the U.S. Coast Guard, and the U.S. Air Force. The goal is to create faster, more reliable ways of reaching distressed aircraft and their occupants.

Be sure to watch at 3:49 for the same crash in slow motion.